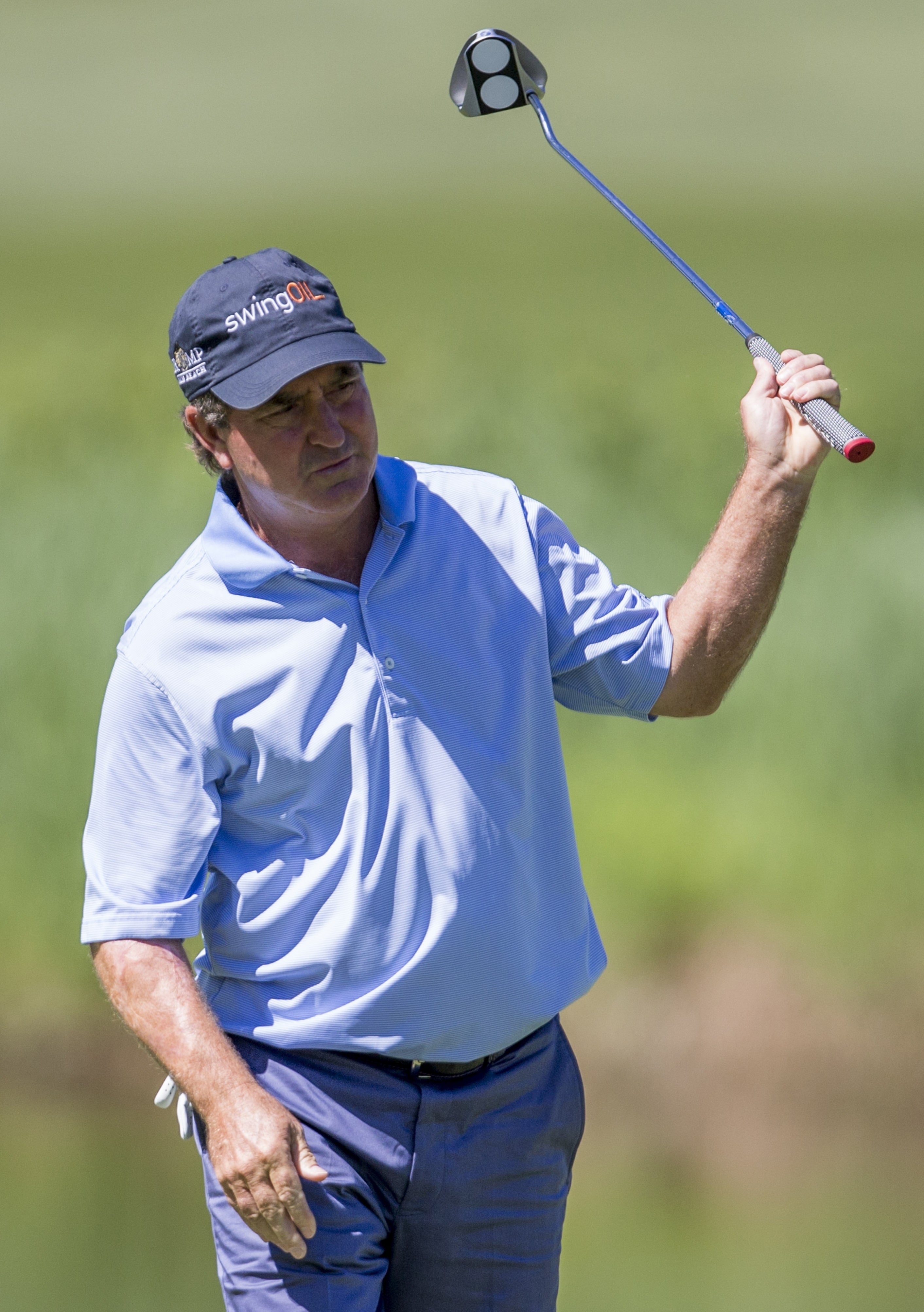 Gene Sauers watches his putt on the 15th green during the final round of the Senior PGA Championship golf tournament at Harbor Shores Golf Club in Benton Harbor, Mich., Sunday, May 29, 2016. Gene Sauers finished tied for 14th place with a score of 9
AP Photo/Robert Franklin

UPPER ARLINGTON, Ohio (AP) Gene Sauers closed with a 1-under 69 and took advantage of another collapse by Miguel Angel Jimenez to win the rain-delayed U.S. Senior Open on Monday for his first senior victory.

The 53-year-old from Georgia finished with three straight pars to go from a one-shot deficit to a one-shot victory over Jimenez and Billy Mayfair at Scioto Country Club.

It capped a remarkable comeback for Sauers, who nearly died from a rare disease 10 years ago and was out of golf for seven years with pain so severe there were times he couldn’t even get off the couch.

Jimenez had a one-shot lead going into the final round, but blew a lead at a second straight major. The Spaniard regained the lead with a birdie on the 15th hole, a two-shot swing when Sauers made bogey, only to bogey the 17th hole.

They were tied on the 18th, but Jimenez missed the green and made a second straight bogey. Sauers made a 5-foot par putt to win it.

Sauers, who once thought he might never play again, now is exempt into the U.S. Open next year at Erin Hills.

Ten years ago, he was incorrectly diagnosed with rheumatoid arthritis, ended up in the hospital for seven weeks and was given a 25 percent chance of survival. Eventually he was diagnosed with Stevens-Johnson syndrome, a rare disorder of the skin and mucous membranes that causes the skin on his extremities to burn from the inside out. He was out of the game for seven years

”Being back to playing with these guys, it’s a pleasure,” he said. ”I didn’t think I’d ever be here. I told my wife, when I was in the hospital, I didn’t think I was ever coming out. She kept me strong.”

For Jimenez, it was the third consecutive tournament he let a lead slip away.

Three weeks ago at Carnoustie in the Senior British Open, the 52-year-old Spaniard took a four-stroke lead into the last day, then shot 75 and tied for third – three strokes behind winner Paul Broadhurst. Last week in the 3M Championship, he was a stroke ahead entering the final round and ended up losing when Joe Durant shot 63 and eagled the first hole of a playoff.

He led by a stroke after the third round at Scioto on Saturday but double-bogeyed the second hole to let Sauers overtake him, then couldn’t get it done at the end after Sauers let him back in it.

Mayfair carded four birdies against a single bogey for a 3-under 67. Ian Woosnam was the only other player under par, finishing fourth at 1-under after a 68.

”All four days we saw different golf courses,” Mayfair said. ”Kind of medium on Thursday. It wasn’t all that bad, that windy, but it was still hard to play on Friday. Of course, Saturday the wind started blowing. It was blowing all over the place. Today it was wet and soft and hardly any wind. We got to see Scioto in four different ways on four different days.”

For some of his other recent stories: http://bigstory.ap.org/content/mitch-stacy