Le Golf National outside Paris, the host course of the Ryder Cup next year, has been part of the European Tour schedule since 1991 and last year was the 25th time it has held the French Open.

So along with the European crowd, that’s one big advantage for the home team next year.

U.S. captain Jim Furyk hopes his American team can find time to see the course ahead of the September matches, even if they don’t play the tournament. The French Open is three weeks before the British Open, held the same week as The National on the PGA Tour schedule. He said he would extend the invitation to the top 15 or 20 players in the U.S. standings. Furyk understands each player sets his own schedule, which includes obligations and rest, and he said it’s not going to be a requirement.

For American players, especially those on the bubble, it might not be a bad idea. Asked if it would be a strong recommendation to see the course, Furyk replied, “I think it’s going to be an ask and an invite, and I would hope to see some of those players.” 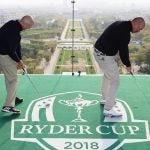 This is the second time in the last six years the Americans go overseas for the Ryder Cup in possession of the trophy. They have not won on European soil since 1993, the year Jordan Spieth, Justin Thomas, Daniel Berger and Xander Schauffele were born.

“We have 25 years of scars to overcome,” Furyk said. “That being said, I will have a lot of young talent on my team. I’m anxious to see how they handle that challenge. Europe has handled those away matches far better in the last 25 years than we have.”