Fred Couples dishes on Tiger Woods, playing with back pain, the Ryder Cup and if he’ll ever earn that captaincy 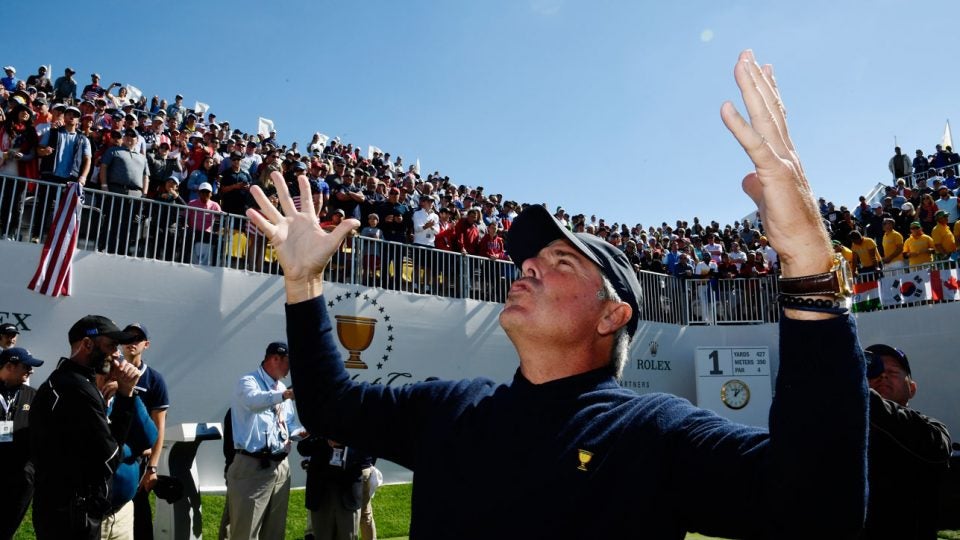 Fred Couples is back in your earbuds. The 58-year-old is set to host monthly shows for SiriusXM PGA Tour Radio beginning Tuesday with former Super Bowl champions Eli Manning and Justin Tuck joining him on show No. 1. He’ll wrap up the two-hour show with some golf talk, joined by a popular voice himself, Jim Nantz.

Couples joined the GOLF.com Podcast this week to talk about the show, Tiger Woods, his prospects as a Ryder Cup captain and the gravity of the Ryder Cup itself. He attended the 2016 Ryder Cup as a fan and plans to fly to Paris for it again this year, where, as he discussed on the podcast, he expects it to be the the best 24 players ever assembled for the event.

Check out some of the conversation with Couples below, and for more listen to the entire podcast.

Simply put, why does Fred Couples do sports talk radio? What do you get out of it?

To be honest, I know this is going to sound crazy but I live in L.A. and Newport for my whole life and am not a music person. I listen to talk radio and I’m not big on news, so it’s usually sports. I just enjoy it. When I got the call to do this show, I thought, ‘Wow, can I handle this.’ Golf is what I do, so I thought, ‘Can I do more than golf? Can I do other sports? Can I get athletes that play golf to come on, certainly athletes that don’t play golf.’ It was very intriguing to me. It’s very nerve-wracking.

Well, I’m a baseball fan. My dad played baseball. My brother played baseball. I really enjoy everything. As I get older — I’m 58 — everyone knows I love TV but it’s very difficult for me to sit through a full football game. Thirty years ago you couldn’t turn the channel every two seconds and watch golf on one channel, college basketball on another, hockey on another, lacrosse on another…I enjoy just watching people. I like to watch other people. I might go to a basketball game and not even look at the guy with the ball half the time just to see what everyone else is doing. It’s intriguing.

In terms of golf, you’ll have plenty of time to talk about Tiger Woods, who played this weekend at Torrey Pines, another step on the comeback trail. Everyone tends to say the same things about him seeming happy, seeming fast, smiling. What have you seen out of him that hasn’t already been said 100 times?

That’s a great question. He’s someone I have fun texting with. We talk about his kids and golf very rarely comes up. It wasn’t that long ago that we were at the Presidents Cup — I was an assistant, he was an assistant — golf never came up in seven straight days. I didn’t ask him. I don’t know if some of the other team players asked him…my caddie Joey (LaCava) of 20-something years is caddying for him. He never gives out much. All he said is that he’s just very excited. I can see that…Now, is he the player he once was? Of course not. Can he be? Yeah, if he’s feeling good and healthy. There is another thing where you have these little back issues. At the end of the day, you’re exhausted. There was a time where I was miserable. I just couldn’t take it. It’s like having a toothache all day long.

.@Sean_Zak talks with Fred Couples about his new radio show, Tiger’s return, playing through back pain and the Ryder Cup.

His back injury history is well-documented. So is yours. I understand they’re not the same, but it was reported last week that he might be warming up with driver first, and that that tip came from you. Is that true, and what is the idea there?

It may have come from Joey [LaCava]. There was a time where I couldn’t hit a pitching wedge or a sand wedge. Even when I played OK golf, I would go practice and by the time I would warm up hitting sand wedges and nine-irons, my back would already hurt. I would start out with driver and hit them at 70 percent. It was just a fluid swing and I would stand really tall and it never affected my back. There were some days where I never putted, never hit any irons, just swung drivers to warm up and headed to the first tee. I think there’s nothing wrong with that. Tom Watson for the longest time has warmed up with a three-iron. That absolutely blows my mind.

Obviously, Tiger has been stretched and worked out. When he goes to the driving range, there’s that little time of 20 minutes. Tiger would tell you that if he plays golf and there’s a wait on the tee for two groups, or if someone loses a ball, he stands there for 10 minutes, it’s like you’re starting over. Your back is a very controlled thing and once it gets going, I used to say I could play 36 holes once I started if I never stopped. The problem was if I sat down, if I waited and stood and stood. It was horrible. I think he’s doing this drill. I don’t know if he did it in San Diego, he may be doing at home. But it’s really just something to get your body going where you don’t feel the strain of the bending of your back to hit wedges. 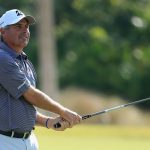 You may also like The GOLF interview: Fred Couples digs deep

Let’s pivot slightly from Tiger to St. Andrews. A place he dominated at one point. That’s where the Senior British Open will be there for the first time. It’s an event I’m sure you’re hoping to play in. You own that place.

I’m going no matter how I feel. I’ll use the word — for us on the Champions Tour — unreal. Unreal. We played at Carnoustie, we played Turnberry, we played a couple times in Ireland…but St. Andrews, I have three or four really good amateur friends that are going to go over there and try to qualify. This is — for me — perfect timing. I’m 58, I might not be playing much longer. To go to St. Andrews, play in a golf event, I can’t wait.

How much do you remember your own personal history at St. Andrews, because it’s really good.

I know my first British Open was 1984. I played very well and I remember I was maybe three groups from the end. I was 24 years old. There’s three or four little steps right behind the 18th green and I watched Seve make that putt and then punch his fist in all corners of the green to all the fans. I gotta tell you, it was unreal. Unreal. I played well a few other times and I just like the sense of it. I like hitting it in other fairways, which I’ve done a lot in my career. Here, you want to hit in other fairways. For the times that I missed putts in tournaments and not made the ones I needed to, at St. Andrews you’re going to hit a lot of greens and I consider myself a very, very good lag putter. You can have putts at St. Andrews from 60, 70, 80, 100 feet. I putt well there, which is good because when the wind starts really blowing hard, it’s a very, very difficult course.

How badly do you still want to be a Ryder Cup captain? How much longer before you just get over it being a possibility?

I really do want the opportunity, but I think I better start getting over it because after Furyk, they’ve got some studs coming in there. It wouldn’t shock me if Phil Mickelson is mentioned or Tiger Woods in four years. The bottom line is, after the run of the Presidents Cup, I didn’t really call up the PGA, but the word got out. Then I talked to them a couple different times. I may have told them a couple different things they didn’t want to hear…I just think I wasn’t maybe one of their guys. Some people think I’m a little lackadaisical. I’ve had people ask me ‘OK, captain. When’s the bus going tomorrow morning?’ I looked at them and said, ‘Look, that’s not my job. My job is to have you guys play well. You can find out when the bus is going from anyone else.’ They laugh at me. But if you say that to someone such as the PGA of America president, he may not think it’s that funny. My job is not to get people around. It’s to get them to Paris, like Jim Furyk is gonna do. He’s going to get these guys to play well, and I think I can do that very well.

Do you think you might be picked as an assistant captain this year?

No, I think Furyk’s got his guys. I don’t want to guess who they are, but I know he’s got them. I went to Minnesota and had a great time. Unfortunately had to come back. I left Sunday morning and got home to watch it on TV. Going to Paris, we’ll stay the whole time. It’s a unique event, and even though I play golf, I love to go to Super Bowls. I went to the four World Series games in LA. I don’t do this all the time, but as I get older, golf is becoming secondary. I would hate to miss — in the prime of these players…They’re all at this age where they seem like they’re at the top of the world. Only so many guys can win and it’s going to bounce around between these 20 guys. I think Europe is stacked and the U.S. is stacked.

You won the Masters. You won the Players. Where does the Ryder Cup actually rank for you when you look back at a long career?

Certainly it would go Masters No. 1 as my great accomplishment in golf. It’s my favorite tournament in the world every single year. My buddy just said it’s 68 days until we get there. But the Ryder Cup is the greatest achievement to get there. I played on five teams and I had a blast…The whole week, you’re nervous from the time you get there on Monday. Practice rounds, they feel like a major. It’s hard to explain to people…you go tee off on a Tuesday in front of 30,000 people, we do it all the time. But with the Ryder Cup, you’re nervous on Tuesday…

The better players do it. I honestly think — last year wasn’t good — I think this year in France is going to be incredible. It’s going to be the best 24 players — I think — ever assembled, I think. I really do. We’ve had teams with Nicklaus, Trevino, Miller, but if you include Europe, they weren’t probably as strong back then as our team. But if you look at their team and our team [now], it’ll be the 24 best players.

Subscribe to the GOLF.com Podcast on iTunes or Soundcloud.