For a recharged Rory McIlroy, a long, damp Erin Hills layout is cause for optimism

ERIN, Wis. – Do you believe in Rory McIlroy?

Thanks to a nagging rib injury, the 28-year-old has endured a disjointed season. But he enters this 117th U.S. Open feeling good and facing a course that caters to his strengths.

The U.S. Open is billed as – all together now – golf’s toughest test, and McIlroy wants the exam to be as exhaustive as possible. When told at his Tuesday press conference that the grounds crew was spotted hacking down fescue on several holes, McIlroy became animated. 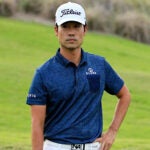 “Really? You’ve got 156 of the best players in the world here,” he said. “If we can’t hit it within that avenue, you might as well pack your bags and go home.”

You can’t blame him for seeking maximum punishment on wayward tee shots. Driver is Rors’ best club, and it’s poised to get a workout at a course set to play more than 7,600 yards. Even with Tuesday’s surprise landscaping, Erin Hills is still taking on a shape that has historically been good to the Northern Irishman. He’s won each of his four majors on courses that were softened by tournament-week squalls, and after 1.49 inches of rain pounded the track Monday night, Erin Hills is already squishier than expected. “I wasn’t crying when I saw that rain last night and this morning,” McIlroy said. The extended forecast calls for more storms – a quick scan of the rural Wisconsin countryside on Tuesday afternoon revealed more gray skies.

McIlroy spent the morning putting in work on the practice green under the watchful eye of coach Phil Kenyon. McIlroy said he’ll roll out a new flatstick this week, a red TaylorMade Spider model that’s similar to those used by Jason Day and Dustin Johnson. McIlroy has been tinkering with the putter since the Masters and now believes it’s ready for primetime. Erin’s greens aren’t as severe as most previous Opens, and thanks to the rain, they may stimp slower than the 13-13.5 the USGA had intended. 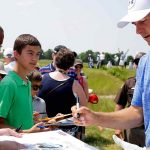 You may also like Fans, players get first impressions (and uncover new hazards) at Erin Hills

If McIlroy’s putting is reasonable and his rib can withstand full swings from what remains of the tall fescue, you have to like his chances. The numbers bear it out. McIlroy hasn’t played enough PGA Tour rounds this season for his stats to officially qualify, but if they did, he’d currently rank 2nd in strokes gained off the tee, behind only Dustin Johnson, and 3rd in approaches to the green. He’d lead in strokes gained tee-to-green, and his long game will only be a greater weapon still on a wetter, slower course. McIlroy has only played six PGA Tour events this season, but has recorded top-10 finishes in four.

But then there’s that tricky rib injury, which caused McIlroy to shut it down for two months earlier this year, and again for another month after he winced his way to a T-35 finish at the Players Championship. This will be McIlroy’s first start since Sawgrass. He said that he spent a couple of weeks rehabbing the injury, then two more practicing in Portugal, which has better golf weather than his base in Ireland. He’s recently ramped things up, and he now feels healthy again.

“No limitations on my swing whatsoever. Preparation-wise, I may be — instead of hitting five bags of balls, I’ll hit two, just something like that,” he said. “It’s not as if I can’t hit balls, it’s just a matter of managing how many repetitions I put through it.” McIlroy arrived in Wisconsin last Friday, took a walking tour with Dana Fry, one of Erin’s architects, and played a few rounds over the weekend. He also chatted with a USGA official immediately afterward, sounding confident.

Add it up, and it’s all there for McIlroy to make a run at his fifth major title and second U.S. Open. He’ll tee off Thursday at 2:09 local time alongside Jason Day and Justin Rose.