Saturday is moving day, but not everyone headed in the right direction in the third round of the PGA Championship. Fan favorite Rickie Fowler stumbled down the stretch, tumbling from two under to two over in an eye-blink. Jason Day all-but killed his chances with a catastrophic quadruple bogey on the last. Though Hideki Matsuyama is still in the hunt, he slipped two steps back with a two-over 73. Amid all the commotion, and with one round remaining, here are five questions we need to ask.

What was he thinking?

Years from now, Jason Day may provide us with a satisfactory explanation for the impossible recovery shot he attempted on the 18th hole, the one he rapped into a bush en route to a disastrous quadruple bogey. But for the rest of this week, and probably the next one, and the one after that, we’ll be trying to figure what, exactly, was going through his head?

Will fans tune in or out?

Nicklaus vs. Watson? Not exactly. The folkloric final pairing Sunday will be Kevin Kisner and Chris Stroud. Nothing wrong with either man, and not much missing in their games. But given what we’ll kindly call their modest star power, we have to wonder: what kind of electricity — and audience — can we expect if, down the closing stretch, they’re the last two dueling in the sun? 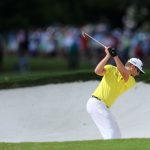 You may also like Chris Stroud: 5 things to know about the PGA Championship contender

The likable Texan said he spent hours responding to the hundreds of people who called, texted or emailed to wish him well heading into the weekend. What sort of wireless bill will he be looking at if he finds a way to seal this deal?

What number will do it?

Hideki Matsuyama is in the hunt again, one week after scorching Firestone with a Sunday 61. Quail Hollow isn’t about to yield that kind of score. But how low will the winner have to go?

The Green Mile or the Green Monster?

“Green Monster” is the term Jim Nantz tossed out late Sunday, modifying the moniker of Quail Hollow’s final three holes. Rickie Fowler played it in four over. So did Jason Day. Kevin Kisner did them one shot better, but it could have been worse. He caught a break when his water-bound approach on 18 caromed off a footbridge and cleared the creek. In short, there was pain aplenty coming down the stretch on Saturday. Come Sunday evening, will the Mile-turned-Monster mete out even more?