Danny Lee chips up onto the fourth green during the second round of the Tournament of Champions golf event Friday, Jan. 8, 2016, at Kapalua Plantation Course in Kapalua, Hawaii.
AP Photo/Matt York

With an estimated 201,003 fans packing TPC Scottsdale’s Stadium Course, Lee shot a 4-under 67 to move three strokes ahead of Rickie Fowler and Hideki Matsuyama. 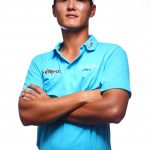 Fowler parred the final five holes for a 70. Matsuyama had a 68.