Coulda, shoulda: Everyone but Thomas leaving PGA replaying what could have been

CHARLOTTE — They say you have to lose a major championship before you can win one. “I think that’s pretty true,” Chris Stroud said wistfully on Sunday evening at Quail Hollow. Kevin Kisner offered a saltier take: “I don’t believe in all that. You play good you win, bottom line.”

Early in the final nine holes of the 99th PGA Championship, there was a five-way tie for first: Stroud, Kisner, Justin Thomas, Hideki Matsuyama, and Francesco Molinari, all at seven under. Patrick Reed and Rickie Fowler were two back. It felt a little bit like the 2011 Masters, and then Thomas did his best Charl Schwartzel — or, more to the point, Tom Watson — chipping in on 13 to get to eight under and seize the lead. One-by-one all the would-be contenders faltered while Thomas, per Kisner’s formulation, played good and won. (He had lost his requisite major two months ago at the U.S. Open, when he blew up on Sunday.)

If golf is a game of regrets, everyone but Thomas is leaving Quail Hollow replaying what could have been. Kisner, the 54-hole leader, said, “Oh man, number seven is going to haunt me.” He rinsed a 3-iron there, bogeying a par-5 that was a must-birdie. He was still in it on the closing holes but three-putted number 16 and put another ball in the water on 18. Stroud felt betrayed all day by his flat-stick. “I putted bad today and it made me tight on the golf shots,” he said. “I couldn’t figure it out – I was pushing putts, pulling them. It starts out physical and becomes mental.” He played the back nine in 41 to tumble down the leaderboard. Stroud and Kisner are both ascendant pros who were getting their first taste of the pressure of contending in a major. This loss will sting more for the other more decorated players who got steamrolled by Thomas. After grabbing his share of the lead, Matsuyama promptly bogeyed three straight holes, a stunning retreat from arguably the hottest player in the game. He rallied with birdies at 14 and 15 but then bogeyed two more holes coming in. Afterward, Matsuyama’s normally placid demeanor cracked just a bit and with a tinge of frustration he said through his interpreter, “All I can do is just try harder next time.”

With five worldwide wins in the last nine months – including a pair of WGCs – Matsuyama has entered the conversation for the dreaded title of Best Player Never To Have Won A Major. But at 25, Matsuyama is a little young for that good news/bad news honor, and, anyway, one of the key criteria is to have had your heart broken in a few majors. This counts as No. 1 for him.

Fowler, a more popular choice for BPNTHWAM, can feel good about his Sunday 67, which tied for the low round of the day. But he lost this PGA on Saturday, when he staggered through the final three holes bogey, double bogey, bogey. He contended this year at both the Masters and U.S. Open and at 28 now has eight top-10s in the majors. There are no palpable weaknesses in Fowler’s game, and you have to think his time is coming. But he has now lost more than his share and is nearing the point where experience becomes a burden. 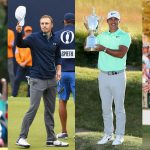 You may also like Oh, what a season! The four major championships of 2017, ranked

The finish at the PGA was a reminder of just how fine the line is between winning and losing; for Reed, it could be encapsulated in one shot. Captain America began the final round five strokes off the lead. A front-nine 34 moved him up the leaderboard, and then birdies on 10, 14 and 15 gave him a chance. Bunkered on 18 off the tee – “he missed the fairway by a foot,” sighed his caddie Kessler Kairan – Reed hit a strong recovery to just short of the green. If he could get up-and-down and into the clubhouse at seven under, it would make life considerably tougher for Thomas, who at the moment was at eight under playing the 16th hole.

Reed might be the best chipper/pitcher on Tour, and he faced a straightforward shot to a back flag. But nothing is easy with the Wanamaker hanging in the balance, especially when it’s your first real shot to win a major. Reed used a 61-degree wedge and didn’t fly his shot far enough. His ball screeched to a halt on the grainy upslope, 15 feet short of the hole. (Up in the booth, Sir Nick was beside himself with the shot selection — why hadn’t Reed lofted down and played a higher-percentage bump shot back to the hole?) Reed misread the putt and never scared the hole, for a fatal bogey. “Very frustrating,” he said afterward. “A lot of good things going on but falling just a little short.”

That was ultimately the case for all of the players who fell short at Quail Hollow: There was plenty to learn from in a bitter defeat. Thomas, at least, offers hope for future redemption.