Citing back pain, Rory McIlroy says he’s not sure when he’ll play again

CHARLOTTE, N.C. (AP) — The lingering pain Rory McIlroy felt when he finished the PGA Championship was not just about ending another year without a major.

McIlroy revealed that he has felt spasms in a muscle in his upper back the last few weeks, and he’s not sure when he will play next. It could be in a few weeks when the FedEx Cup playoffs begin. It could be sometime next year.

“I have a good bit of time to get healthy and address a few things going forward,” McIlroy said. “As I said, the next big thing is April, and that’s really what my focus will be on from now until then.”

April is the Masters, the only major keeping McIlroy from the career Grand Slam.

McIlroy now has gone three years since his last major title at Valhalla in the PGA Championship. This year was all about injuries, and apparently he’s not over them yet.

“Right now I can feel my left rhomboid going into spasm,” McIlroy said after closing with a 3-under 68 at Quail Hollow. “It’s sort of the way it has been the last few weeks. I have upped my practice coming into these two events because I wanted to feel like I was in a good place in my game.” He was three shots behind going into the final round at the Bridgestone Invitational last week until Hideki Matsuyama ran away with it. At the PGA Championship, he was slowed by bad stretches in the middle of his rounds that never allowed him to get under par.

“It’s a tough one because I go out there and play and shoot decent scores,” McIlroy said. “But when I come off the course, I feel my left rhomboid going into spasm. (The) inside of my left arm goes numb. So I don’t know what to do. I’ve got this next week off to assess what I need to go forward.”

McIlroy has headed home to Northern Ireland and planned to meet with his trainer to figure out the next step.

Along with failing to win a major for the third straight year, McIlroy hasn’t won anywhere around the world since he won the Tour Championship last September to capture the FedEx Cup and its $10 million prize.

But it was a tough year from the start. He discovered a slight rib fracture after a playoff loss in the South African Open and he took seven weeks off to let it heal. He got married after the Masters, and the pain returned at The Players Championship in May. McIlroy believes he practiced too much too soon, and he said he would have to spend the rest of the year managing his practice time and his fitness. 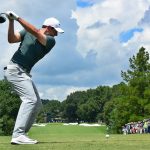 You may also like The Greatest Spectacle in Golf: Rory McIlroy and his booming, moonshot drives

But he didn’t have many answers when he left Quail Hollow.

McIlroy said the pain wasn’t as bad as it was early in the year at the Players, when he said it really flared up on him. But it’s still there.

“I can feel it,” he said. “I can play 18 holes. I warm up, it’s OK. But once I get done, having to go through the whole routine of getting it ready to go again the next day, you shouldn’t have to do that. If it was injury-free, that wouldn’t happen.”

“Look, I don’t know what I’m going to do,” he said. “You might not see me until next year. You might see me in a couple of weeks’ time. It really depends.”

McIlroy believes he can play well, put good scores together and win tournaments. His concern is that he doesn’t think he can contend on a regular basis unless he gets 100 percent healthy, and that’s not where he is now.

If he’s that concerned about the injury, why play at all?

McIlroy paused for the longest time.

“I don’t know,” he said. “I feel like a sense of … not duty, but I’ve missed a lot of time already. If I’m capable of playing, I feel like, ‘Why shouldn’t you?’ But then at the same time, if you are not capable of playing at your best, why should you play? We’ll see what happens.”

© 2017 The Associated Press. All rights reserved. This material may not be published, broadcast, rewritten or redistributed. Learn more about our Privacy Policy and Terms of Use.