Caught on camera: Jason Dufner split his pants and was unable to hide it 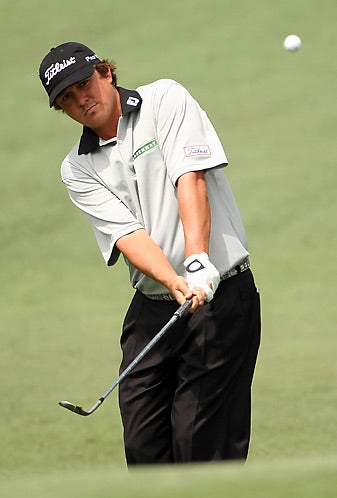 In the pantheon of tough finishes to a round of golf, Jason Dufner’s day at the Tour Championship ranks right up there.

For most of his second round, the 40-year-old was sailing along, four under through 15 holes and climbing the leaderboard. Then something strange happened. At the par-4 16th, Dufner putted out and didn’t retrieve his ball from the cup. After making a bogey on 17, he did the same thing.

This wasn’t Jordan Spieth’s famous “Go get that!” moment from the British Open. Something was clearly amiss. Was Dufner angry? Injured? Concussed?

On the 18th hole, Dufner gingerly plucked his ball from the cup after putting out, and the mystery was revealed: He had split his pants near his back pocket and was attempting to conceal the evidence.

But nothing gets past those Golf Channel television cameras.

“That’s quite a curtsy,” quipped Peter Jacobsen from the broadcast booth. “When you’ve got trouser trouble, be gentle.”

Dufner shot a 67 and is two shots back. Look for him to sport a fresh pair of slacks for Saturday’s third round.