Bubba Watson: Rory McIlroy Is Under More Pressure This Masters 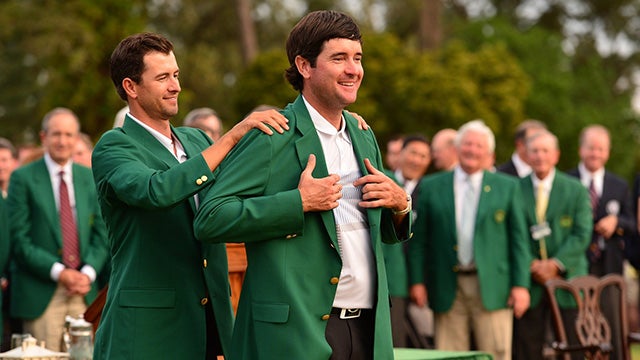 Bubba Watson may be the defending Masters champ (again), but Watson said there’s more pressure on World No. 1 Rory McIlroy at Augusta National this year.

“If you’re looking at just me and McIlroy, I would say McIlroy,” Watson said during a conference call with Golf.com and other members of the media. “Not that he’s under pressure, I don’t call it pressure at all from McIlroy. I call it an accomplishment he’s trying to do. But he’s so young, he’s going to have year after year after year to try to do this, to win a Grand Slam.”

McIlroy and Watson, the first- and second-ranked players in the world, will tune up for the Masters this week at Arnold Palmer’s Bay Hill Invitational. They are part of a field which features the world’s top five players. Bubba will play alongside Brooks Koepka and Adam Scott the first two rounds. Rory is paired with Jason Day and Rickie Fowler.

After winning last year’s British Open, McIlroy is just a green jacket short of the Career Grand Slam, but he has struggled at Augusta National in the past. He cracked the Top 10 for the first time in six tries with a T8 finish at last year’s Masters.

For Watson, 36, two Masters victories has taken pressure out of the equation, so he’s finally settling into his green jacket.

Watson suffered from a Masters hangover in 2013, going winless on Tour and finishing 50th at Augusta. But now that he’s a veteran of the media hoopla, the Champions Dinner and the attenion that comes from being the tournament’s “honorary guy,” he’s looking forward to defending more than ever before.

Watson would not reveal his menu selections for his second stint hosting the Champions Dinner but suggested his tastes lie south of the border.

Even with a field comprised of the world’s top golfers, Watson said that his most ferocious rival is the course and his own game.

“Anybody in the field is good enough to win the golf tournament,” Watson said. “They have either won a tournament before or always playing good to get in the field.”

Watson conceded that despite the wealth of emerging young talent on Tour, the Masters field would be that much better — and more exciting — with Tiger Woods in the mix. Woods has not played since February, when he withdrew 11 holes into the Farmers Insurance Open at Torrey Pines and announced his indefinite leave of absence from the Tour while he gets his game “tournament ready.” Woods has won the Masters four times, most recently in 2005. He missed last year’s tournament after undergoing back surgery.

“The game of golf is obviously missing something [without] Tiger Woods,” said Watson. “He hits shots that we have all dreamed about. He’s won, what, 80 tournaments? I’ve only got seven, so I’m still way behind him.”