Update: After sleeping off his harsh comments about the USGA, Bryson DeChambeau took to Twitter early Sunday to apologize. His full statement is at the bottom of this post.

Bryson DeChambeau has always done things his own way in his golf career, the best example being his use of one-length shafts on all of his irons. In December, DeChambeau added another quirk to his game: side-saddle putting.

After two months of using the unconventional technique in competition, DeChambeau abandoned it this week at the Honda Classic.

He told Golf Digest’s Brian Wacker on Friday: “The USGA essentially doesn’t like me doing it… I’m pretty much done with it. They’re not a good organization, and you can quote me on that. I’m part of their family and as family it’s very frustrating to see them stunt the growth of the game.” USGA spokesperson Janeen Driscoll told Golf Digest: “We talked to Bryson in mid-January to discuss both his putter and his method of stroke. In that conversation we confirmed that his method of stroke (side-saddle) was fully compliant within the Rules of Golf, and he could feel confident in continuing to employ that method.” 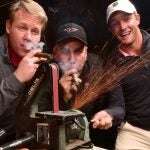 You may also like Bryson DeChambeau, a custom clubmaker and a teaching pro might start a revolution

DeChambeau is ranked 194th in strokes gained: putting on Tour, which suggests the side-saddle technique wasn’t the elixir he’d hoped it would be.