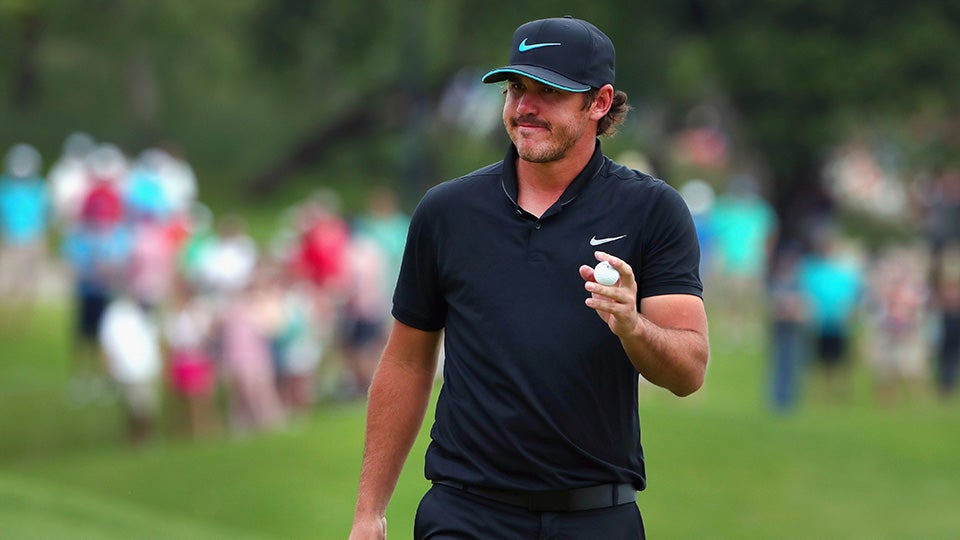 Brooks Koepka waves to the gallery on the tenth green during Round Three at the AT&T Byron Nelson on May 21, 2016 in Irving, Texas.
Tom Pennington

IRVING, Texas (AP) Brooks Koepka overcame two early bogeys and the huge shadow of playing alongside Jordan Spieth in his home event, shooting a 5-under 65 on Saturday to take the lead into the final round of the Byron Nelson.

Koepka was at 16-under 194 to match the best 54-hole score at the Nelson and put him two strokes ahead of Spieth.

Koepka took the lead with a 20-foot birdie putt at No. 14. That was the same hole where Spieth hit his drive into the water, had to punch into the fairway and then drained a 23-foot bogey putt in his round of 67.

Spieth played his first PGA Tour event at the Nelson as a 16-year-old amateur six years ago. He is now the world’s No. 2-ranked player and the crowd favorite. His image is everywhere, including the 8,000 bobbleheads given away Saturday.

But Koepka played bogey-free the rest of the day and took over as the lead with a birdie at the difficult 405-yard 14th hole. Spieth made the long putt to keep that hole from being worse right after his first par this week at the par-3 13th, where he had after three-putted for bogey each of the first two days.

At 26, Koepka is four years older than Spieth but has only one win (Phoenix in 2015) in his 54 previous PGA Tour starts.

Crane, who turned 40 in March, shot 72 and dropped to 10 under and in a tie for 11th. He is looking for his first victory in 48 starts since winning at Memphis two years ago in what also was his last top-10 finish.

Garcia was 15 under and with the outright lead after his fourth birdie of the round, and second in a row, when he made a 25-foot at No. 8, a 463-yard par 4. But the 36-year-old Spaniard, the 2004 Nelson champion, then three-putted from nearly 60 feet at the 9th hole before missing the fairway with his drive at No. 10 and being unable to make a 9-foot par save before pars on his last eight holes.

That second bogey came about the same time Spieth, in the final group right behind him, made a 9-foot birdie at the 416-yard No. 9 to get to 14 under for the lead.

This is Garcia’s 61st PGA Tour start since his last win in 2012, his first at TPC Four Seasons in that span.

Spieth is playing the Nelson for the sixth time, the fourth as a professional. The Dallas native’s best finish was a tie for 16th as a 16-year-old in 2010, when he was tied for seventh after the third round – his best 54-hole showing until now.

Since playing at the Nelson that first time, and then the following year missing his high school graduation ceremony after making the cut again, the only year he missed playing Lord Byron’s tournament was in 2012, when he was at the University of Texas and the Longhorns were NCAA champions. As a pro, he had never been better than tied for 18th going into the final round and hasn’t finished better than a tie for 30th last year.