#AskAlan: How nervous should the PGA Tour be about Vijay Singh’s lawsuit? 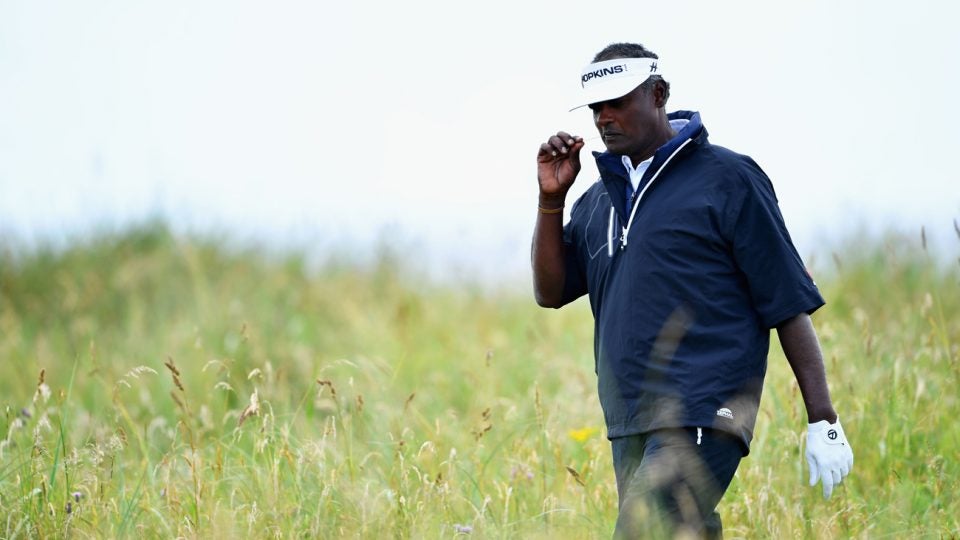 Welcome to another edition of #AskAlan. These are now going to be a weekly thing. (Consider yourself warned.) I want the Knockdown to be an ongoing conversation between me and you, the lunatic fringe of golf fans. Please keep the thoughtful questions coming…

“Will anyone ever enforce a slow play penalty on Jason (All) Day?” -@PaulRWilkinson

Well, if the Tour rules officials didn’t do it on Sunday, I think we can safely say it’s never going to happen. Coming down the stretch at the Nelson, Day was repeatedly timed at a minute to a minute and and a half to play his shots, and on one occasion he took nearly two full minutes. Forty seconds is supposed to be the maximum. I think public shaming is the only possible solution, but unfortunately, Day isn’t a social media creature. Perhaps golf fans should go full Flav and wear shot clocks around their necks?

“One a scale of 1-10 how nervous is the Tour that parts of Vijay’s lawsuit were allowed to proceed? How nervous should they be?” -Jeremy (@IndyJerome)

11. This is akin to the situation in Washington—Robert Mueller may not find a smoking gun on Russian collusion, but if he digs into Trump’s taxes and business dealings who knows what will be uncovered? Likewise, Singh’s lawsuit could pull back the curtain on decades of the Tour’s top-secret disciplinary matters, and regardless of what a judge decides about Vijay’s case, there may be all kinds of juicy revelations. Here’s hoping!

“If Phil & [Patrick] Reed both stay out of the top 10, are they automatic President’s Cup picks? #AskAlan” -Brian (@brianros1)

I think they have to be. Reed (currently seventh in points) has proven he can raise his game in team events, and Phil (16th) is the heartbeat of the squad and a de facto playing captain who, by the way, was last seen in one of the greatest Ryder Cup singles matches of all-time. Billy Horschel just moved up to 18th, and he would bring a lot of firepower and a lot of Reed’s grittiness, but who would you rather have? Among the rest of the bubble boys no one else has a really compelling case except maybe Daniel Berger (ninth), simply because he’s a young’un and the U.S. team needs to start grooming replacements for some of its aging stalwarts.

“Do you think the move to Trinity Forest will give the Nelson some juice next year? Or will the bomb-and-gougers hate the course too much?” -@public_golfer

Among the many ways pro golfers are different from us is that most of them don’t really care about how “good” a course is; their overriding interest is how it synthesizes with their game, and if they can maximize their idiosyncratic advantages. I haven’t been to Trinity yet but love the minimalist look. Dustin Johnson is more interested in making birdies, and over the years he made so many at TPC Las Colinas that he came to love the course, even though most everyone else was lukewarm at best about it. I spent some time with Dustin and his brother and caddie, Austin, last week, and both were lamenting the move. Beyond the course, the players, caddies and wives loved the logistics of the Nelson: everyone would stay on-site at the Four Seasons, which has an awesome gym and a basketball court that was populated by the Tour types. Meanwhile, the wives swarmed the lovely pool and spa. So the move to Trinity will end this camarderie and convenience, and it’s another reason the change of venues is risky for a tournament that has struggled to define itself since Lord Byron’s death in 2006.

“Which junior or college golfers are you most excited to see on Tour? Are there any prodigies on the horizon?” -@handsomeburglr

Maverick McNealy at Stanford, for sure. He has a such a mature game, and I’ve been enjoying the will-he-or-won’t-he questions about whether he’ll turn pro or go into the business world. Of course he’s going to go pro! What’s more fun, traveling the world playing golf or sitting behind a desk? And he can always go the Joe Ogilvie route and retire from the Tour early and pursue a second career in the straight world.

“Who is the player that history will look back on and say, ‘He only won one major?!’ I say Couples. -J.T. (@jthannan)

Yeah, I think Freddy is the ultimate what-if. What if he never hurt his back? What if he cared more, or had less drama in his love life? Ian Woosnam is another mega-talent who never figured out how to get out of his own way. Ken Venturi had a bunch of chances that he frittered away early in his career. Who knows what Tony Lema might’ve achieved if his life hadn’t been cut short? Paul Azinger was probably the best player in the world when cancer forever altered the trajectory of his career. Lanny Wadkins was a stone-cold killer most of the time but seemed to shrink from the moment in the majors. David Duval’s best golf was about as good as anyone has ever played, but his time came and went much too fast. Among current players, Adam Scott, Henrik Stenson, Dustin Johnson, Louis Oosthuizen and Jason Day all seem too talented to win only one, so we’ll have to reserve judgment.

“Do you think the European tour’s Rolex Series will weaken PGA Tour fields/attract Americans to come over and play?” -Jurre (@MisterJurre)

These are separate issues. With the exception of Patrick Reed, top Americans have shown little interest in joining the European tour, and the Rolex Series isn’t going to change that—there’s still more money and World Ranking points available in the U.S., not to mention a Cracker Barrel on every corner. But top international players are now being enticed to leave their homebases in Florida and play a few more times on the Euro tour, so that will certainly impact the PGA Tour events that fall on the same week. Would Colonial love to have Justin Rose, Henrik Stenson, Ernie Els, Beef, Thomas Pieters and a handful of others who instead are playing at Wentworth? For sure.

“Who else has missed 4-5 cuts the past few weeks that I can put my money on?” -@PhilipGallo

That’s the big lesson from the last two weeks, when S.W. Kim and Billy Horschel won on the back of some very desultory play: All of these guys are one swing thought or one small tweak from catching fire. Yet it’s impossible to say who’s next, which is what makes it so fun for the rest of us.