Another major for Jordan Spieth, and another crafty use of the rules 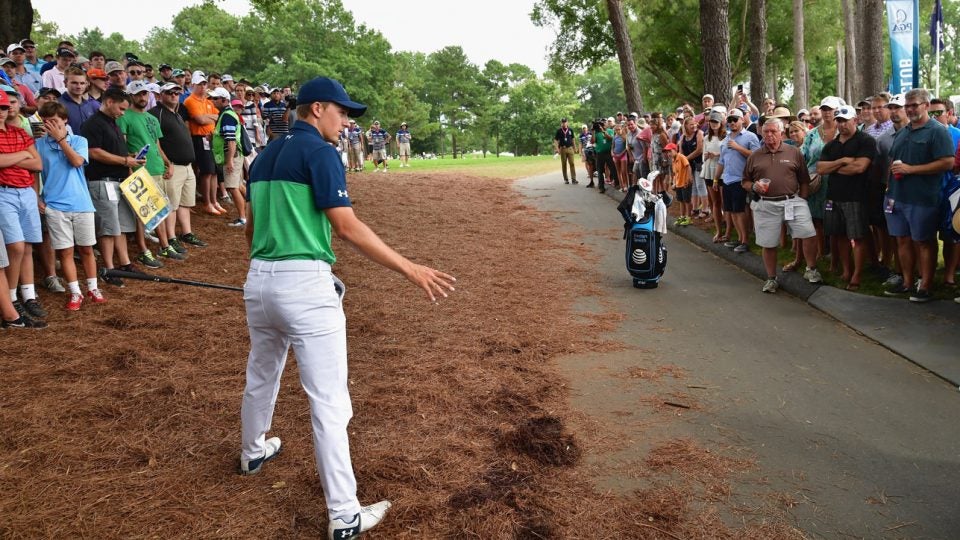 Under the rules of golf, Jordan Spieth was allowed to clear away pine needles before taking a drop on the 10th hole Friday.
Getty Images

CHARLOTTE – Jordan Spieth is struggling to stay in contention at this 99th PGA Championship, and an adventure in the trees Friday afternoon didn’t help his chances. But for the second straight major, the 24-year-old calmly applied the rules of golf to help escape a tricky situation.

On the par-5 10th hole, Spieth drove his tee shot right of the fairway and onto a cart path that cuts through the pines. Spieth knew he would receive a free drop, and the nearest point of relief would leave his ball on a patch of straw. Spieth remembered that pine needles are considered loose impediments, which under the rules can be removed before taking a drop.

“How can I make a mistake here? What can’t I do?” Spieth said to an official on the scene.

“What you can’t do is move anything that’s growing or fixed,” said the ref.

Soon, Spieth was scraping away handfuls of straw like a Labrador clearing a spot for a nap. Ultimately, when Spieth’s two attempted drops rolled back onto the concrete, he was allowed to place his Titleist onto a patch of dirt he had neatly groomed. Spieth made perfect contact with his ensuing punch shot – too perfect – and it sailed through the fairway into the trees again. Here’s how it played out:

“How could I make a mistake here?”

Jordan Spieth checks in with a rules official after his wayward tee shot on 10. #PGAChamp pic.twitter.com/A1zYRnLJU3

Spieth went on to bogey the hole, but it’s another example of his calm, methodical application of the rules while under pressure. Three weeks ago at the British Open, Spieth spent nearly a half an hour playing the 13th hole on Sunday after taking a drop in the driving range adjacent to the fairway. He bogeyed that hole but went on to claim his first claret jug. He’ll need to stage an epic rally to win this week at Quail Hollow, but at least he’s maintained his golden touch with the rulebook.