Aggression will be rewarded at this PGA (looking at you, Rickie, Rahm and Rory)

CHARLOTTE – Davis Love III—born in these parts 54 years ago, winner of this championship 20 years ago, head cheerleader of last year’s winning U.S. Ryder Cup team—has consistent advice for any young player trying to make it on the modern PGA Tour. You can think of the golfer Will Farrell and Cheri Oteri for this next part if you are so inclined:

Some of you surely remember Thorbjorn Olesen, graduate of the Nordic Tour, when he announced his talents to the big leagues at the 2012 British Open. You never saw a golfer with less body fat or a more aggressive swing, plus there was the fire coming out of his Danish eyes. Five years later he’s only 27 and he played his bottom off on the demanding, excellent Quail Hollow Club course here to go around in 67, four under par. Nobody did it better, though Kevin Kisner matched it. Combined they might weigh 300 pounds, but they both have the first necessary ingredient to get around this course: enough clubhead speed to play out of the snarling, surprisingly dry Bermuda rough.

But the reason these next three days are going to make for a superb championship is not because Olesen and Kisner are such big names. And it’s not because the rough is crazy demanding. The reason this tournament will almost certainly end up with a big-time already-proven talent is because the course demands everything. This is not just another Wells Fargo Championship, a good event though that is. These are firm, fast crusty Bermuda greens, the likes of which the Tour players don’t see much of, and in the late afternoon on Saturday and Sunday it’s going to take all sorts of game to master them. What we’re talking about is the sweet-spot that every course set-up person from the USGA and the PGA of America wants, the sweet-spot of making the players switch gears as they get closer to the hole, from hyper-aggressive to masters of finesse.

You get the point. Jordan Spieth, looking to become the youngest player ever to win the professional career grand slam following his win at the British Open last month, is by no means out of it after a first-round 72. As for the U.S. Open winner, Brooks Koepka, who shot 68, he will have to play more half-shots and little pitches and chips here than he did at Erin Hills in order to win. These greens are far harder to hold. These four major winners—Dustin Johnson, Jason Day, Louis Oosthuizen and Hideki Matsuyama—all shot 70s, and are in excellent position. Hold it, hold it, this just in: Hideki (informed sources are saying) has not won a major championship. But it seems like he has, doesn’t it? 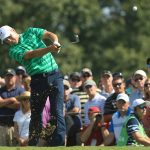 This is the kind of course that, back in the day, Tiger Woods would have had a field day on, requiring so much distance, iron control, finesse pitching and good putting. It’s weird, to be in the player’s locker room and see the special section for the former winners and there’s just a big sad blank between the spot reserved for Jimmy Walker and the plaque with Y.E. Yang’s name on it. No Tiger, no Joe LaCava, no Jim “Bones” Mackay. Phil Mickelson shooting 79. You can pine for 2007 all you want. That era is over and done.

Talk about three aggressive players! Large Jon Rahm, with his Elvis sideburns and his Jay Z flat-brimmed TaylorMade hat, devoured one of those 17-ounce water bottles in about three big sips on 14 today. McIlroy drove it in the right rough on the par-5 15th. You could see the north-pole of his ball and that’s about it. The ball was engulfed. There would have been no shame in hitting a heavy-headed sand wedge back in play there. Instead, McIlroy just annihilated a 5-wood, beating right down on it and leaving a most impressive divot. “You can get more of a wood on it than an iron,” McIlroy said later. Yeah, that’s true—if you have 120 miles per hour of clubhead speed! He shot 72, came out of the scorer’s trailer looking exhausted but thoughtfully answered reporters’ questions for a solid five or six minutes nonetheless. 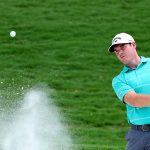 You may also like Shipnuck’s Notebook: crazy-fast greens, grouchy players, and what’s going on with Phil?

Rahm shot 70 but played some tired golf coming in, with bogeys on 16 and 17. He’s a fantastic and already proven talent and nobody will be surprised to see him contend here this week, but he has a short swing and a big, big frame and how that combination will hold up on a Sunday afternoon at a major is still an unknown. All swings get shorter with the pressure on. That doesn’t leave a short swing any place to go.

Then there was Fowler’s 69. Maybe Patrick Reed’s 69 and Paul Casey’s 69 and Tony Finau’s 69 were every bit as good. Three more aggressive hombres there, but does one of them have the pitching, chipping and putting game needed to win here? We shall see. Little Rickie does, but he turns 30 next year and we’ve been singing his golfing praises for a long time now. His game was so solid and athletic on Thursday, watching him play the course was like watching him at his breakthrough win at here at the 2012 Wells Fargo event, in a playoff over McIlroy and D.A. Points (who shot 68 on Thursday). But this is a different and more challenging course, with more a stake. He’ll have a chance, if he can remember his captain’s motto: