AUGUSTA, Ga. — When Sergio Garcia was two years old, he picked up a broomstick and began pantomiming the golf swing of his father, Victor, a former tour pro. Within a year Victor provided young Sergio with a set of cut-down clubs, which his boy wielded on the topsy-turvy layout at Mediterraneo Golf Club, in Borriol, a small town off the east coast of Spain. Victor was the pro at the humble club; his wife, Consuelo, ran the shop.

Before long Sergio was playing members for Cokes and ice cream. “He won a lot of ice cream,” Victor once said. Sergio’s older brother and younger sister also played, but Sergio was lo natural. He’d play from dawn to dusk at Mediterraneo, crafting shots and developing touch that left players twice his age slack-jawed. At 16, he became the youngest winner of the European Amateur, which earned him a spot in the 1996 British Open at Royal Lytham. Over the next couple of years he asserted himself as the alpha dog on Europe’s amateur circuit. After Garcia’s win at the 1998 British Am, Augusta National extended him an invitation to the Masters, where after playing the first two rounds with Tiger Woods, Garcia finished as low amateur. Months later, by which point Garcia had turned pro, he and Woods clashed in the final round of the 1999 PGA Championship at Medinah. Garcia officially announced his arrival on the 16th hole when, eyes shut, he ripped a highlight-reel shot around a tree, then scampered down the fairway after it. What couldn’t this kid do?

Eighteen years later, on a perfect April evening in Augusta, Victor and Consuelo were huddled around a table in a corner of Augusta National’s grill room, watching their son in the climactic moments of the 81st Masters on a pair of TVs set into the wall. They could barely stand to watch, squirming through every smashed drive and missed putt. All these years later their Sergio had gone on to fulfill much of his seemingly unlimited promise and potential with 31 professional wins worldwide. But for all the highs, there was also so much heartache, especially in the majors, where Garcia had come up empty in a staggering 73 attempts. And now here was the Spaniard, 37 and with gray in his beard, in a playoff for the green jacket with Englishman Justin Rose. After Rose blocked his drive into the trees on 18, Garcia stepped in and smoked his tee ball down the middle, drawing applause from Garcia’s table. Rose’s wayward drive forced him to punch his second shot under some branches but well short of the green. Advantage, El Nino, and he didn’t waste it, knocking his approach from 147 yards to 12 feet. Chubby Chandler, the affable British agent, was among the other onlookers gathered in the grill room. He grinned after Garcia’s shot and looked over at Garcia’s crew, which included Garcia’s longtime manager, Carlos Rodriguez, and acclaimed chef Jose Andres, a family friend of the Garcias who had been preparing their meals this week.

Soon, Rose was staring down a must-make 14-footer that would, if he could convert it, force Garcia to hole his birdie putt for the win. As Rose addressed the ball, the room fell eerily silent. Consuelo clenched her hands. Rodriguez sat frozen on the edge of his chair.

When the putt trundeled by, the table erupted. The wicked witch was at long last dead. Consuelo reached back and squeezed Victor’s arm. He could have used a tissue, as his eyes welled with tears. Moments later, after Sergio holed out to make it official, the members of Garcia’s camp leapt out of their seats. Victor, Consuelo and Andres embraced in a hug that seemed to last an hour. All of them were audibly weeping, almost moaning.

Tears still streaming, the family exited the clubhouse and began the walk to Butler Cabin to greet their son. They didn’t get far before Golf Channel cameras cornered Victor and Andres. Victor spoke, his friend translated.

“I couldn’t ask for anything more for him than winning the Masters,” Victor said.

And on what would have been the 60th birthday of Seve Ballesteros, no less. Serendipia is the Spanish word — serendipity.

“Seve! Seve!” Victor cried in response to a question about Ballesteros, as he raised his arms to the sky.

“No translation needed,” Andres told the swarming pack of reporters.

“It definitely popped in my mind a few times,” Sergio said later when asked about his late countryman and idol. “I’m sure he helped a little bit with some of those shots or some of those putts.” 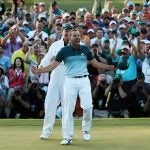 Victor and Consuelo weren’t the only patrons pulling for their son. Though Garcia has clashed with American fans over the years, he was undoubtedly the sentimental favorite as his navigated the back nine on Sunday. “Vamos, Sergio!“ fans barked. After drilling his second shot at the par-5 15th to 14 feet and then pouring in the putt, the resulting roar tore through the pines like a freight train. At the conclusion of his playoff with Rose, the two old friends embraced on the 18th green. Rose put his mouth to Garcia’s ear and said, “Nobody deserved it more than you do.”

The celebration continued after Garcia accepted the green jacket from Danny Willett in Butler Cabin. As the Spaniard’s camp marched back up to the putting green for the official green jacket ceremony, the procession quickly turned into a victory parade. Garcia’s fiancée, Angela Akins, and Willet’s wife, Nicole, led the way past a row of patrons four or five deep. Next came Consuelo and Victor, who blew kisses to the crowd. And lastly Sergio, fist pumping and with a smile that seemed to stretch to Amen Corner.

The scene felt less like a time-honored Masters tradition than a European victory party at the Ryder Cup. The outpouring was not lost on Garcia.

“I have a beautiful life,” he said later. “Major or no major … I have so many people that care for me and love me and support me. I feel so nicely surrounded.”

But surely never more so than on this perfect night in Augusta.