1. He’s not likely to run for president anytime soon

“You sound like a politician,” Auriemma asked him. “You ever gonna run for anything?”

2. The competition never got to be too much for him Yeah, it’s safe to say that Tiger is quite the competitor. This exchange said it all:

GA: “When Stephen Ames said that nonsense about you right before you played him in the world championship match and you beat him like…”

TW: “He didn’t quite respect the way that I could play the game of golf. So I just had to show him that I could still play. And you have no idea how ticked I was when I missed that putt on the 10th hole to beat him 10 and 8.”

“So people ask me, why don’t you go back to your 2000 swing?” Woods said. “I can’t. My knee is trashed from all those years of playing that way. I’ve had four operations on my knee. Forget when my back was bad — pre-surgery and pre-back problems, people were saying the same thing: ‘Why don’t you go back to 2000?’ I can’t, my knee’s trashed from playing that way, I can’t do that any more. I have to look for a different way.”

5. He’s hitting the ball so far he’s even surprising himself…

“I can’t believe how far I’m hitting the golf ball,” he said. “I’m back to hitting it my full numbers, and not really trying to do that. I didn’t realize how much I had dropped off because of the pain in my back…just because I had lived this from day to day to day and couldn’t tell the difference. But now I can tell the difference, and my posture is so much better over the golf ball. 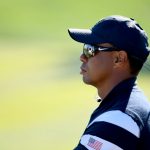 6. …still, he’s scared of hurting his back again

“I’m still concerned about it, uneven lies, or weird swings, or out of trouble — is my back going to go out, is it going to hurt again? … And my doctor said, my surgeon says, it’s almost fused. I mean, it’s like trying to break your leg, it’s really hard to do. … But still, in the back of my mind I remember making those swings and ending up on the ground, and having people come get me because I couldn’t walk any more.”

7. Fans don’t always see his lighter side because he’s so intense on the course

“Oh, in the locker room, I’m definitely a s—giver. I love to rip on guys, especially some of my friends out there, and play practical jokes, but you know when you look at the way I play, yeah, I’m playing and I’m competing and I’m as focused as I possibly can be. … Unfortunately that’s what people have based their assumptions on because that’s what they’ve seen. But the guys on tour, they see me in the locker room, on the range, in the practice round just ribbing them and they’re ribbing me and we’re one big fraternity out there.”

8. He still thinks about chasing down Jack Nicklaus’s majors record

9. While a lot has changed, golf hasn’t. And he’s ready for his comeback

“No matter what you look at, low score still wins. And so the objective is, shoot the lowest score, I don’t give a s— how old you are, what you do, the game doesn’t change.”