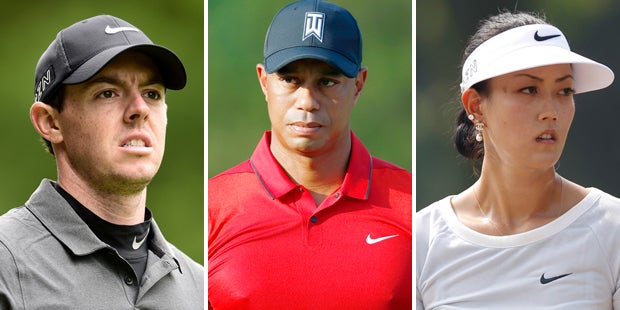 Every Sunday night, GOLF.com conducts an e-mail roundtable with writers from Sports Illustrated and Golf Magazine. Check in every week for the unfiltered opinions of our writers and editors and join the conversation in the comments section below.

1.) Jim Furyk shot the first 58 in PGA Tour history on Sunday, carding his 12-under mark at the Travelers Championship at TPC River Highlands. Where does this achievement rank in stature among the Tour’s all-time scoring records?

Jeff Ritter, digital development editor, Sports Illustrated Golf Group (@Jeff_Ritter): I think you have to put it right there with Al Geiberger’s 59 in 1977, with maybe a slight edge to AG because 60 was a nice, round number to crack, and he also won the event. Ditto for Annika’s 59. I suppose you could geek out and analyze strength of the course and strokes-gained on the field, but for a single-round achievement in a non-major, I couldn’t rank Furyk’s 58 any lower than third. It’s an astonishing achievement.

Cameron Morfit, senior writer, GOLF Magazine (@CameronMorfit): Justin Thomas shot 62, and there were some 64s, so Furyk’s 58 wasn’t exactly on an Oakmont-hard course. That said, come on … it’s a score that starts with a 5 and ends with an 8, and that’s just silly good. Put it this way: Any score that looks like it must be a typo has to be good. Good for Furyk, one of the saltiest, most delightfully cantankerous characters I’ve ever interviewed.

Alan Shipnuck, senior writer, Sports Illustrated (@AlanShipnuck): We can always quibble about the course or the setup, but the bottom line is Furyk did something no one has ever done on Tour. If Geiberger is golf’s Roger Bannister, Furyk is now the Usain Bolt, pushing a record number so low it’s hard to imagine it will ever be beaten.

Mark Godich, senior editor, Sports Illustrated (@MarkGodich): Exactly, Alan. And if someone had told me 10 years ago that someone was going to shoot a 59 and a 58, Furyk would not have made my top 20. Good for him. And even with the hole-out from the fairway at the 3rd, 58 is about as high as he could have shot.

Joe Passov, senior editor, GOLF Magazine (@JoePassov) Indeed, Mark…the what-ifs with Furyk’s 58 are nearly as remarkable as his actual score. He failed to birdie the par-5 on the back, then took three from the edge at the drivable par-4 15th, to record only a par. Definitely could have been lower. Yet, does a 12-under-par 58 outdo a 13-under 59 that David Duval shot to win (at the 1999 Bob Hope)?

2.) In the span of a month, we’ve witnessed a major championship scoring record, two 63s in the majors—one of which was a burned edge away from being a 62—and a now a 58. Are these gaudy numbers cause for concern, or should we embrace the surge of low scoring?

Ritter: This is modern golf. Equipment has never been better and players are just so good. The recent run of scoring has been dizzying and exciting. Let’s embrace it.

Morfit: I agree, Jeff. I’m fine with it. They’re funny numbers, and we’re not used to seeing them, but we want to see our heroes doing super-human things, right? And despite the advances in equipment, I’m not shooting 58, 68 or even 78, so it must be something more than the equipment.

Shipnuck: It’s fun, but as the crazy-low numbers become more common they do lose some of their luster. The problem is that for pros to be truly challenged these days a course would need to be close to 9,000 yards. That’s prohibitively expensive to build and maintain so unless something major changes with equipment regulation these silly numbers will continue.

Godich: I’ve got no problem with it. And I get excited seeing what shot a player is going to pull off next. Exhibit A: The two titantic, long irons that Jason Day hit into the par-5 18th at Baltusrol.

Passov: I’m fine with the low number barrage. It’s not like everyone in the field is going crazy-low. Equipment is better than ever, leading to fewer mis-hits and mistakes that aren’t punished as badly as they used to, and course conditions are so good–and uniform–that you don’t see bad breaks occurring as much as you would have a generation or two ago. Give the guys soft conditions and no wind, and you’re going to see really low scores and even, now and again, record scores.

3.) Nike is pulling out of the golf club manufacturing business. For the casual golf fan at home, what’s the biggest takeaway from this surprise announcement from the sporting goods behemoth?

Ritter: Golf isn’t dying, but it’s a tough business. Nike signed flashy stars and drew a lot of attention, but it seems clear that hard-core golfers, who actually buy the gear, never fully accepted Nike as a top-notch clubmaker.

Morfit: I’ll tell you what was a killer, and the first quote I thought of when I heard Nike was getting out of the club-making biz: Phil saying Tiger was playing inferior equipment, way back when in the pages of Golf Magazine. That was a very, very destructive quote. I also suspect there was some truth to it, at least in Nike Golf’s infancy. It’s too bad they’re getting out. They’d made huge strides, and this is more bad optics for golf. Ritter: I would love to know what Nike’s club sales looked like in the aftermath of Phil’s quote. Nike’s growth may have flat-lined right there.

Shipnuck: When the biggest, coolest, most innovative brand in sports decides golf is a lose-lose proposition, we have a problem. TaylorMade is for sale, too. Meanwhile, the biggest endorsers for both of these companies chose to skip the Olympics for reasons that look more absurd every night as the Rio party rages on prime time television. I think the takeaway is that golf is very small, niche sport. Tiger made people forget this for a while—including his ambitious friends at Nike—but golf is now reverting to its former place in the larger sports landscape.

Godich: It’s not secret that participation numbers are down, but I’d be even more concerned that TaylorMade, which has a longer history in the industry than Nike, is on the market.

Passov: I’m not going to nominate quality as the reason for Nike Golf’s lack of widespread acceptance and ultimate demise. Think of Jack Nicklaus’s brand in his heyday–MacGregor–that was all but dead by the late 1990s. Or Hogan, which used to make the finest blade irons other than MacGregor, or Wilson, or Spalding. It’s all so cyclical, and Alan’s right: Golf is reverting to its status as a niche sport. Nike Golf might have enjoyed plenty of market share, but if they couldn’t forecast growth, then pull the plug.

4.) One of the intriguing subplots of the Nike news is that Tiger Woods and Rory McIlroy will need to secure new equipment sponsors. Care to speculate about what the future holds for the Swoosh’s former dynamic duo?

Ritter: I have no inside info on this, but both guys played Titleist before Nike, so perhaps that’s something to potentially rekindle. PXG, led by its billionaire owner Bob Parsons, seems to be aggressively courting tour pros and spending big money, so it wouldn’t be a shock to see it get in the mix.

Morfit: Jeff, I could see Tiger going to PXG. That actually would be a pretty unsurprising development. I’m not so sure about Rory. He’s a bigger get at this point, given his longer time horizon. I could see him going back to Titleist, but I wouldn’t rule out TaylorMade or Callaway, either. It’ll be a bidding war, for sure.

Shipnuck: I’m not sure how much juice either one has in the marketplace right now. I could see both playing for a long time without a deal, just to tinker and have fun. I’m sure Nike is still on the hook for the duration of their contracts so there’s no rush.

Godich: I’ll be most interested to see who goes after Tiger, and more importantly, how much money a company is going to throw at him. What kind of appeal will he have? How much is he going to play? And how will he play?

Passov: Truly anybody’s guess at this point, but I’m with Mark here. Tiger’s next move seems most intriguing. And yes, Alan, if Rory and Tiger together couldn’t keep Nike Golf from going bye-bye, how much incentive is there, really, for anyone to pay giant sums to get these guys on-board?

5.) At long last the much-debated Olympic golf event kicks off this week in Rio. What do you need to see from the competition to believe it can have a future beyond the 2020 Games in Tokyo?

Ritter: I think it really comes down to passion. I’ve watched a fair amount of Olympic coverage so far, and it’s just so moving to see how much the competition means to the athletes. If golfers in Rio fully buy in (and I think they will) golf will have a future beyond Tokyo.

Godich: I’ve seen plenty already. I don’t believe you can comprehend the magnitude of such an event until you’re in the middle of it all, and the players seem to be embracing the Olympics. I’m guessing there’s at least one player who’s sitting at home and second-guessing his decision.

Shipnuck: It’s been fun to read all the social media posts from the golfers who are in Rio, or en route. They’ve been swept up by the Olympic fever and are dying to be part of the show. I think they’ll play with a lot of heart and passion and help mitigate a lot of the damage. Here’s hoping, anyway.

Morfit: What if America doesn’t matter? What if Australia doesn’t matter? What if Ireland doesn’t matter? Golf is well established in those countries, so the defections by Jason, Dustin, Jordan and Rory could wind up being less important than we thought. What if Anirban Lahiri wins this thing? Then golf maybe becomes more of an enticing sport for kids in India, and Olympic golf has succeeded. If someone like Justin Rose wins for England, or Patrick Reed for the U.S., I applaud as fans of both players and both countries, but is it really going to make much of a difference?

Passov: I’m swayed by Jeff’s proposition that it will be all about passion. If anyone saw the conclusion of Sunday’s Djokovic-del Potro tennis match, which left loser Djokovic in tears, you’ll realize how much this Olympic medal (would have) meant to him, a guy who already owns a career Grand Slam and lifetime earnings of more than $100 million. If golf’s best players that showed up embrace that mindset this year–unlikely, but possible–we may have a real future for golf in the Olympics.

6.) Would the event be better off with a brand name like Rickie or Bubba winning gold, or with a more anonymous player pulling off a Cinderella story?

Ritter: Either scenario can work, you just hope it’s memorable. Again, the most important thing for golf’s Olympic future is for the competitors to show fire and heart and treat this thing like a major or Ryder Cup—tears included—and then return home raving about the experience.

Morfit: A brand name winner won’t help. In fact, it will only reinforce the criticism that this whole thing looks like just another golf tournament. Preferably we want a winner we’ve never even heard of, whose name seems to have too many consonants per vowel (or vice-versa). And he’d better cry at the medals ceremony.

Shipnuck: Exactly. The longer the longshot, the better. I’m pulling for Mohammad Rahman, who looked utterly overjoyed carrying the flag for Bangladesh at the Opening Ceremony.

Godich: I’m all for an underdog, provided he or she takes down a big name: Think Milan-Muncie Central, App State-Michigan (sorry, Ritter), Chaminade-Virginia, Boise State-Oklahoma.

Passov: If Sergio wins for Spain, does this count as his major?