Tour Confidential: Is Jordan Spieth’s Australian Open Win a Sign of a Huge 2017 to Come? 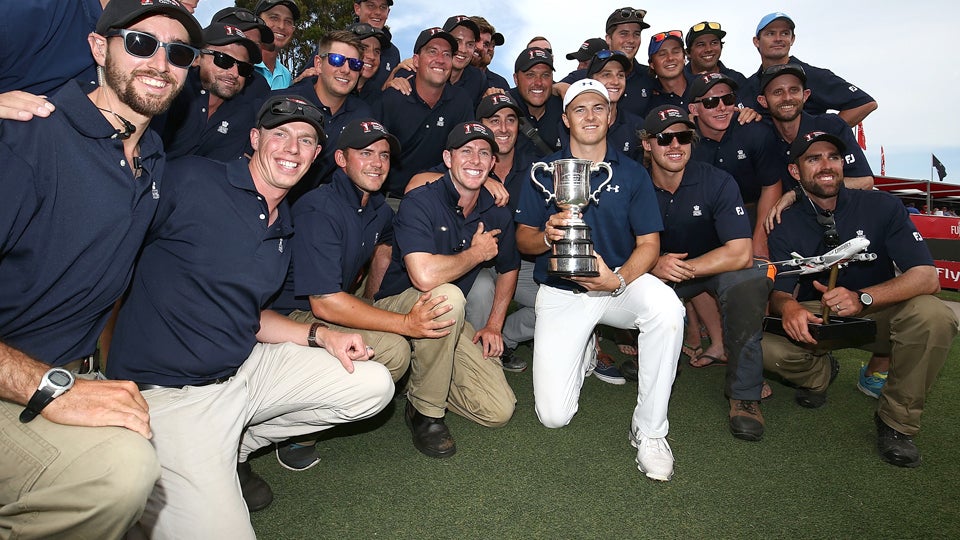 Jordan Spieth poses with grounds crew staff after winning the Australian Open on Sunday. Is his victory a sign of big things to come in 2017 for the two-time major winner?
Getty Images

Every Sunday night, GOLF.com conducts an e-mail roundtable with writers from Sports Illustrated and Golf Magazine. Check in every week for the unfiltered opinions of our writers and editors and join the conversation by tweeting us @golf_com.

1. Jordan Spieth won his second Australian Open in three years on Sunday at Royal Sydney, joining an elite list of multiple-time winners that includes Jack Nicklaus, Gary Player and Greg Norman. How much should we read into this victory, given he prefaced his monstrous 2015 season with a win at the Aussie Open?

Mark Godich, senior editor, Sports Illustrated (@MarkGodich): I can’t imagine anything bad coming out of winning. I’d also suggest it is largely the result of a lesson learned from his globe-trotting early in the year. Spieth had a bounce in his step, his ball-striking was good enough, and he did what he does best, draining must-make putts on the last three holes of regulation and the first hole in the playoff. This is most definitely something to build on for 2017.

Michael Bamberger, senior writer, Sports Illustrated: I totally agree, Mark: mental tiredness shows up in putting more than anything else, and the win, and the way he won, shows a well-rested Jordan Spieth.

Alan Shipnuck, senior writer, Sports Illustrated (@AlanShipnuck): It’s a great development for Spieth, who often looked lost last year post-Augusta. Just as significant was that it came after a six-week rest. A refreshed, refocused, hungry Spieth will be a force to be reckoned with.

Jeff Ritter, digital development editor, Sports Illustrated Golf Group (@Jeff_Ritter): Just as Rory’s monster finish to ‘16 is a great sign for him, so it goes for Spieth. And Jordan has done this before — I seem to remember him having a nice little run (at the Grand Slam) shortly after winning down under late in ’14.

Josh Sens, contributor, GOLF (@JoshSens): As if we needed any more reminders of how successful they can be, Rory and Spieth have both served up good examples. They’re also reminders of how big of a role confidence plays in it all. The more putts drop, the more positive the player’s outlook, which gives way to more made putts. And on. So yes, good sign for Spieth. But a guarantee of a monster season? There is no such thing (a guarantee, I mean).

Joe Passov, senior editor, GOLF (@joepassov): I’m with you folks here. I got to watch the telecast live out here in the Mountain Time Zone and you just knew he was going to bury that putt in the playoff. Spieth showed refreshing candor earlier this year in acknowledging he was burnt out from the globe-trotting and he never did fully recover. Yes, Australia is a haul, but he came in well-rested and to win a big-time national championship, in a dogfight, is huge.

Godich: I was watching as well, Joe. That putt in the playoff would have gone in a thimble. Just like the three must-make putts he holed before that. 2. England’s Charley Hull won the LPGA’s season-ending CME Group Tour Championship, while 20-year-old Ariya Jutanugarn of Thailand won the season-long points race and the accompanying $1 million bonus—yet another indication that U.S. players are struggling to keep pace in the women’s game. “The Americans are out-motivated, out-focused and out-driven, and it’s showing up,” Dottie Pepper told The AP last week. “Nobody wants to hear that, but all you have to do is look at the results.” Do you agree with Pepper’s assessment?

Shipnuck: There are other structural issues at play, namely that the U.S. has no national team or program to develop players, unlike most other strong golf nations. But given the size of the American population, the post-Title IX boom of women’s athletics here and all the resources available to good juniors, it is a bit baffling that the U.S. is not producing more top players. Maybe Pepper is right.

Bamberger: She is absolutely right. Just look at the list of the top-30 LPGA money winners. It’s not just women’s golf. It’s tennis, squash, airport design-and-maintenance. Gary Player (of South Africa) has been saying it for years about us, literally and figuratively: We’re fat.

Godich: I’d say the results pretty much speak for themselves.

Ritter: I generally don’t buy the “player X won because they wanted it more than everyone else” line of reasoning, but the trend in women’s golf is undeniable. Maybe it’s cyclical, and the U.S. will rebound with a handful of Tour winners next year. Or, maybe Shipnuck is onto something — while the U.S. cranks out very good collegiate golfers, other nations are developing worldbeaters.

Sens: I’ll buy that there are structural issues. But I also think there’s a cyclical nature to these things. It’s not as if American women have been absent from the majors. In 2014, three American women won majors. An American also won in 2015 and ‘16. Anyway, if Pepper’s right — she has as clear a view of the women’s game as anyone — her quote sure makes for good motivation.

Passov: Josh, you make a great point about Dottie Pepper’s judgment. While her comments may be a bit supercharged (and she’s been there before in that department), she’s awfully close to the core — and hey, sometimes the truth hurts. Except for how it affects television ratings, I’m not really bothered by the fact that the American women are lagging, but I’m not going to lie to you, either. When Michelle Wie and Lexi Thompson were dueling for supremacy in majors in 2014, I was interested. Today, I’m not sure I could tell you who won any of the LPGA majors this year. And that’s a problem.

Shipnuck: Dustin Johnson, with Spieth giving him a strong run for the money.

Godich: I’ll stick with Spieth, who will be an in-his-prime 28 years old.

Ritter: I know the idea of a “Big 3” is temporarily on ice after each failed to land a major this year, but health permitting, I’d probably take Spieth, Rory, and Day in that order, with Tiger and Phil rounding out the top five.

Passov: If Rickie Fowler could turn it around and win a major, look out, Number 1. 4. Phil Mickelson’s caddie, Jim (Bones) Mackay, revealed last week that he had a double-knee replacement in October; he said he’s healing well and plans to be back on the bag early next year. Tour caddie is often thought of as a cushy gig, but do we underestimate the wear and tear the job puts on loopers’ bodies?

Shipnuck: And DJ’s caddie-brother, Austin Johnson, just had hernia surgery. And Michael Greller, Spieth’s man, spent a lot of last year limping around with ankle problems. The physical toll is no joke.

Godich: You try lugging a 40-pound bag across all kinds of terrain and in all kinds of conditions for miles at a time.

Ritter: Practice rounds are also tough on caddies. Players hit the shots and deserve the glory, but looper life is by no means cushy.

Sens: Not to mention that for every Bones, there are scores of others working for players on the bubble, or hustling on the Web.com tour, where the paydays aren’t nearly as great.

Passov: And think of the guys (and gals) who caddie double all day, at Bandon and beyond. It takes its toll. 5. Pat Perez told GOLF.com that the media hype around Tiger Woods’s scheduled return to competition in two weeks has been overkill. Given that Woods hasn’t won since 2013 and struggled mightily during his last “comeback” in 2015, does Perez have a point? Is the media’s attention on Woods out of sync with the public’s interest?

Shipnuck: They are separate issues — Perez is right, but the attention given to Woods reflects the public’s appetite for any news about him. We see this at GOLF.com all the time — any news break about Tiger, however trivial, gets many, many more readers than even the meatiest controversy involving any other player. To quote one of our greatest philosophers, it is what it is.

Godich: It speaks to the fascination with Woods. And let’s face it: This is one of the most compelling stories in sports because we have absolutely no idea how it is going to play out.

Ritter: Woods isn’t just a golfer — he’s a celebrity who still commands plenty of public interest. His return will lead SportsCenter that night and probably even cross over to mainstream news shows.

Bamberger: Pat Perez, from his perspective, nailed it. But for the ordinary golf or sports fan, for whom Tiger’s fall of the pedestal is a tragedy of Shakespearean dimensions, his efforts to claw his way back to the palace of golf is a true this-is-life play.

Sens: Woods is going to be a big story until he hangs it up for good, and even then, a headline with his name will draw eyeballs for good reason. See “Key elements of Greek tragedy” for further explanation as to why. On a side note, I know we’re living in the post-irony age, but worth nothing how Perez’s comments about the excess coverage only generates … more coverage.

Passov: If the idea is to give the people what they want, then there’s no room for dispute. If folks want to read about Tiger more than just about anything else, give ’em Tiger. Period. 6. Happy Thanksgiving! As a journalist, which golf story are you most thankful for this year?

Godich: The celebration of the life of the King. RIP, Arnold.

Ritter: Great call, Mark. I also found the final day of the men’s and women’s Olympic competitions — despite the negative Rio run-up — to be riveting, emotional and extremely cool.

Bamberger: Nice call by both of you. I’m not thankful for it, and it was p-a-i-n-f-u-l to watch, but Jordan Spieth at Augusta reminded us, powerfully, that GOLF IS HARD. Not just for us. For everybody.

Sens: Can’t top any of those. But I’ll add the fevered atmosphere of the Ryder Cup, and the emergence of Captain America, to the list.

Passov: Since I’m chiming in at the end, I’ll see your four stories and raise you a duel for the ages between Stenson and Mickelson at the Open. For sustained competitive excellence and sportsmanship (mutual respect), it had no peer in 2016.