Every evening of the 2017 Open Championship, we will poll GOLF.com editors and writers for their thoughts on a specific question. Today’s query is below.

Is it all over? We are 18 holes away from a third Jordan Spieth major title before he turns 24. He has a three-shot lead over Matt Kuchar and a six-shot lead over Brooks Koepka and Austin Connelly. Is Spieth a lock to bring home the claret jug, or will someone give him a run?

Alan Bastable: Golf is highly unpredictable, expect for when it’s not. With all due respect to Austin Connelly, just give Jordan the jug tonight and let everyone go home early.

Marika Washchyshyn: You always hope that there’s a battle down the stretch, so if anyone is going to put pressure on Jordan, I hope it’s Kuchar. This will be the first true test for Jordan since the 2016 Masters — having a 54-hole lead going into the final round of a major — to see if he can stay focused and close. I think he does, by the way. Start your Spieth Slam preparations!

Michael Bamberger: I believe Jordan will win, maybe by as many as two shots. I believe he will gut out a lot of pars in tough conditions. I believe he will show, again, that he is the real deal not just as a golfer but as a person with a profound understanding of the game (amazingly so for a 23-year-old) and a good grasp on what matters in life. In my nanosecond in the game (that’s how it seems) few if any have impressed me more.

Jeff Ritter: Kuchar could give him a run, but rather than a Mickelson-Stenson redux, I think it’s more likely that Sunday tuns into a Spieth coronation. He was just so unflappable today. That cold-blooded birdie putt on 18 to turn the tables on Kooch, who whiffed a 6-footer moments later, may go down as the defining momentum swing. They should get a head start and engrave J-O-R on the jug right now. 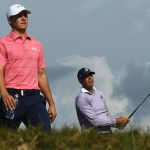 You may also like Might we see a 61 Sunday?! Plus four other questions after Round 3 of the British Open

Sean Zak: All day Saturday I watched, hemming and hawing about whether it was a story of “Jordan is flat-out not screwing up” or “Well, Kuch is just waiting for him to screw up.” Aside from the 3-shot lead, whom do we trust more on a Sunday at a major (with no Rae’s Creek in sight)? Golden Child all the way.

Josh Sens: I’m with Bastable, and not just because I’d like to have tomorrow off. If wilder weather were in the forecast, we might expect the unexpected. But I don’t see Spieth stepping off the gas, or veering off course.

Josh Berhow: Sure, it’s feasible that someone jumps up and catches Spieth, and if anyone does it’s going to be Kuchar. The rest of the field is too far gone. My best guess? The victory parade begins at 9:30 a.m.

Alan Shipnuck: It’s hard to see Jordan not winning this, but he has more Phil in him than Tiger, and that volatility makes Sunday more interesting. Let us not forget the 71st hole double-bogey at Chambers Bay, the blown 71st hole putt at the Old Course and subsequent awful swings at the last, and of course the rinsed wedges at Augusta last year. So this thing ain’t over til it’s over. 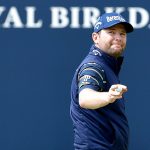