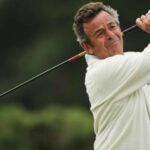 Tony Jacklin represented Europe in 11 Ryder Cups during his career.

The Saudi-funded LIV Golf Invitational Series is currently the biggest disruptor in the sport. The breakaway tour is attempting to lure away some of the biggest stars in the game from the cozy confines of the PGA Tour with promises of huge sums of cash not seen before in golf. If LIV is successful, their league will send reverberations through the golf world.

Thus far, their conquest has borne little fruit. No players have officially committed to the league, but behind the scenes things likely look much different. Talk of NDAs and “no-comment” answers in pressers give us an idea on who is flirting with Greg Norman and Co., and last week LIV Golf released its first schedule for the tour, which aims to begin this summer. Simply put: LIV Golf isn’t going away any time soon.

Once players start to publicly commit to the breakaway tour, things will get hairy as some stakeholders in the game have threatened repercussions for players who affiliate with the Saudis. PGA Tour commissioner Jay Monahan said players who defect will lose Tour status, while PGA of America CEO Seth Waugh suggested similar bans from the PGA Championship and Ryder Cup.

“If someone wants to play on a Ryder Cup for the U.S., they’re going to need to be a member of the PGA of America, and they get that membership through being a member of the tour,” Waugh said at the 2021 PGA Championship. “I believe the Europeans feel the same way, and so I don’t know that we can be more clear than that.”

The potential Ryder Cup ban for some of the best players in the world is hugely concerning to long-time European stalwart Tony Jacklin.

Jacklin, who was made available through his partnership with sportsbook BoyleSports, played on seven Ryder Cups during his decorated career, and served as captain four other times.

“The Ryder Cup has been a central part of my career,” he said. “I really fell in love with golf when I saw my first Ryder Cup in 1957. And as a four-time captain I was close with a lot of players and witnessed a lot of moving moments. It would upset me to see if it were to not continue like that.”

If bans were to come to fruition, it would likely end in a legal battle challenging the biggest stakeholder’s authority to do so. It is unclear how the courts would lean in such a case, but any litigation would cast a shadow over the sport in the interim.

“If that threat is genuine and can be enforced, then why wouldn’t I be concerned?” he said. “If you start blackballing people — I’ve never known a situation quite like that.”

The two-time major winner recently defended Phil Mickelson’s association with the Saudi league, saying he didn’t “see a hell of a lot wrong with it,” and explained that the influx of money into the game should be viewed as a positive for the sport.

“Don’t blame the players for taking the Saudi millions — they would be mad not to,” Jacklin wrote in a column for The Telegraph. “If somebody wants to pay a golfer $20m or $30m to turn up 14 times around the world to play in a three-round event in a Super Golf League, then he or she should be entitled to do it wherever the funds come from, so long as the money is not deemed ‘illegal.’

“If someone offered me $2m to play in a tournament, I wouldn’t say, ‘I don’t want your filthy money’ — I’d be on the next plane thinking how my family could benefit. Politics certainly wouldn’t come into my decision-making process.”

Public opinion has not been so accepting when it comes to the source of the money flowing into the breakaway league. Many critics have called out the Saudis for attempting to “sportswash” their human rights violations, and opponents of the league have cited the funding as the main reason for spurning it.

“They’ve got to figure out a resolution,” Jacklin said. “I’m a lover, not a fighter. I save my battling for the golf course — I’ve had many battles out there. But once that’s over, you shake hands, look your opponent in the eye and you move on. It’s concerning to me that that environment is in jeopardy if things carry on the way they’re going.”