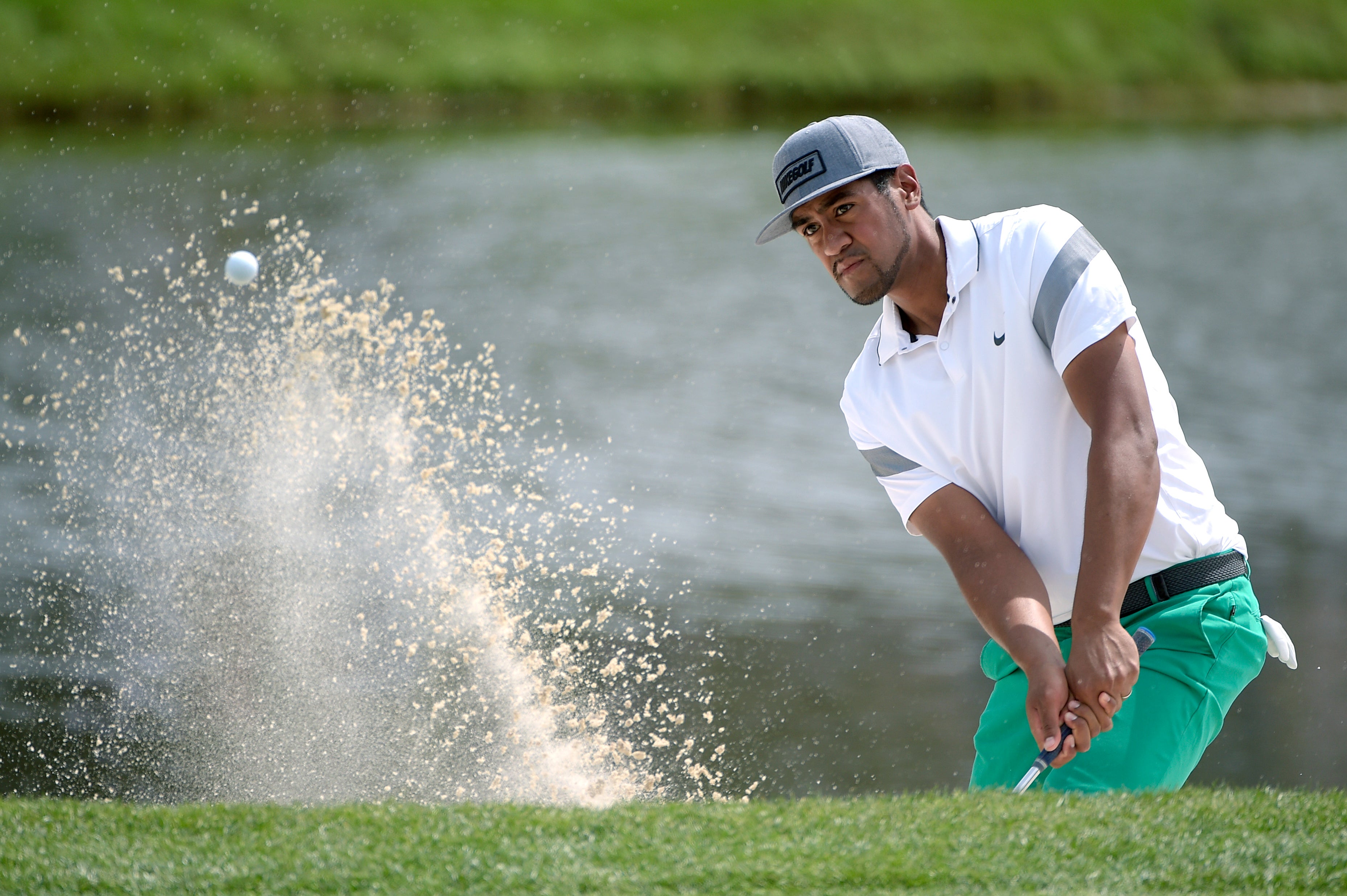 Tony Finau hits out of a bunker onto the 17th green during the first round of the Arnold Palmer Invitational golf tournament in Orlando, Fla., Thursday, March 17, 2016. (AP Photo/Phelan M.
AP Photo/Phelan M. Ebenhack

The 26-year-old Finau won with his third straight birdie in the playoff on the par-5 18th, blasting out of the back bunker to 3 feet.

“I think I’m still a little bit overwhelmed,” Finau said. “It probably hasn’t all sunk in.”

Marino was just off the back edge of the green in two, but left his putt from the fringe 4 1/2 short and missed his birdie try to the right.

“I finally played the hole like you’re supposed to,” Marino said. “I hit the fairway and then hit it on the back fringe. I didn’t think that putt was going to be that slow and then I just hit a poor putt on the second putt. Pretty disappointing, played really well.”

Finau and Marino each shot 2-under 70 to finish at 12-under 276. Marino birdied the 18th to tie Finau, and got into the playoff when Finau missed a 6-foot birdie putt.

“In regulation, it was a putt that I kind of dreamed of making my whole life,” Finau said. “It’s a putt that you practice for your first PGA Tour victory or just for any PGA Tour victory, so I was a little bit bummed that that sneaked by the hole because I hit a really good putt. But I was happy I had another chance at it and was able to make the second one.”

Finau and Marino each birdied the 18th on the first two playoff holes.

Marino is winless on the PGA Tour. He also lost in a playoff in the 2009 Colonial.

The long-hitting Finau, a 6-foot-4 former Utah high school basketball star, is in his second full season on the PGA Tour. He’s the cousin of Milwaukee Bucks player Jabari Parker.

“I tried to just stay in the moment really,” Finau said. “That’s what I learned from last year. You can never look too far ahead and you can’t look back, either. You’ve got to focus on the here and now. I did a really good job of that today even though that putt slipped by in regulation for the win, I knew I still didn’t lose the tournament. I needed to refocus and get ready to play 18 again. That’s what it takes out here I feel like to win. And now that I have that feeling, it’s pretty special.”

Ian Poulter and Mexico’s Rodolfo Cazaubon finished a stroke out of the playoff.

Poulter closed with a 72, missing an 18-foot birdie putt on 18. Playing the event for the first time after failing to get into the Match Play tournament in Texas as the first alternate, the Englishman took a one-stroke lead into the final round.

“It’s a shame. Just slightly disappointing,” Poulter said. “I’m continuing to work on the game to try and improve, and I know if I rectify a couple of poor shots, then my game will improve. Obviously, hitting shots slightly too far right at certain times is costly.”

“I’m really happy,” Cazaubon said. “I guess I feel really comfortable since the beginning. I didn’t have anything to lose because I play on the Web. I just came here to have some fun here.”

Andres Romero (67), Nick Taylor (70) and Scott Brown (71) tied for fifth at 10 under. Puerto Rico’s Rafael Campos, the leader after each of the first two rounds, was another stroke back after a 72.