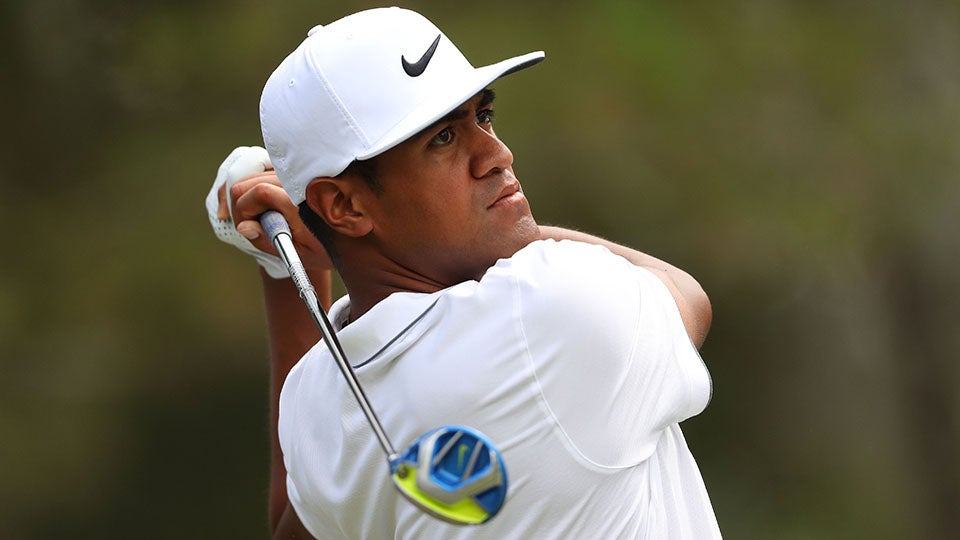 Tony Finau tees off on the 10th hole during round two of the 2014 Sanderson Farms Championships.
Getty Images

Six-foot-four-inch Tony Finau could have been a Division I scholarship athlete in either basketball or golf. Instead, at the tender age of 17 he decided to forgo college altogether and turned to professional golf. After struggling on the mini-tours for six years, Finau finally earned his PGA Tour card in 2014, and his game has been on a steady ascent ever since. He contended at both the U.S. Open (T-14) and PGA Championship (T-10) last summer, and he notched his first PGA Tour win at the Puerto Rico Open in March. We caught up with Finau to talk about his rise, his hops and why he describes himself as “a product of Tiger Woods.”

Let’s go back to your first PGA Tour win, which came in a playoff at the Puerto Rico Open in March. You had a six-footer to win on the 18th hole in regulation and missed it. What were you thinking at that moment?

When it slipped past the hole, I gave it a little extra stare, a little longer. Because I told myself, “I don’t remember missing that putt when I [imagined this moment] as a kid.” But I guess third time was a charm on the third playoff hole [when Finau holed a three-foot birdie putt on the 18th hole for the win].

You failed to make it through Q-school five straight times until you finally broke through in 2014. What motivated you to keep at it?

Perseverance. One of the things I learned growing up, a rule that I go by, is just never give up. That’s one thing that I had to keep telling myself. I continued to believe in myself and knew that I could do it. I just had to keep moving forward, persevering, believing that my time would come. And it did.

You’ve said a change you made to your putting grip really helped your game. What was the adjustment?

In 2013, I changed to left-hand low, or cross-handed. And it’s helped a lot. At the time, the reason I switched was just a lot of inconsistency with putting. I was either making a lot of putts or I was missing a lot of putts. So I I decided to change my grip. It’s been a huge asset.

Speculation is rampant that Tiger may be coming back to competitive golf this summer. How meaningful would that be for the Tour?

I think the game needs him. It would be awesome to compete against him. I’ve only had the opportunity a few times, as he’s been hurt. And it’s tough to see a player of his caliber hurt, with all the injuries that he’s had. The game is always better with him. And I know he knows that. A lot of us are a product of Tiger Woods, myself included.

I don’t know that I’d be playing golf if it wasn’t for him fist-pumping and doing what he was doing when he was my age. It’s really awesome to see that he’s making progress and that hopefully he’s going to be back on the links competing.

You have some incredible role models in your extended family when it comes to athletics. You have relatives who play and have played in the NFL, and NBA player Jabari Parker is your second cousin. Is there some one-upmanship going on at family reunions at this point, now that you’re a Tour winner?

We’re definitely very competitive. I don’t think we’d be in our respective situations if we weren’t competitive people. I have a lot of respect for Jabari and [Detroit Lines defensive tackle] Haloti Ngata and a lot of great athletes that come out of our family. It’s really cool just to be a part of. As far as one-upping, I know Haloti has a Super Bowl ring [with the Baltimore Ravens]. And now I have a PGA Tour win. I don’t know what Jabari’s accolades are going to be in the NBA, but I’m sure he’s going to start winning some NBA championships and throwing it in our face. I’ll take the one-up I have on him right now.

You’re one of a select few guys on Tour who can actually dunk a basketball. Is there any fellow player who can hang with you on the court?

I’m not going to say there’s no one who can’t. There are a lot of great athletes on the PGA Tour and a lot of good basketball players. But I think I can definitely put my name in the mix as one of the best. And I just love playing basketball. I still enjoy playing pickup. And yes, it’s still cool to be able to dunk a basketball. I think it’s a bucket list item for a lot of people. I’m happy that I’ve been able to do that. Again, I’m pretty tall and pretty long. My body’s probably built to play basketball more than golf.

Are there enough guys to fill out a pickup game roster on a week-to-week basis on Tour?

Just please promise to Snapchat the exhibition when it happens!