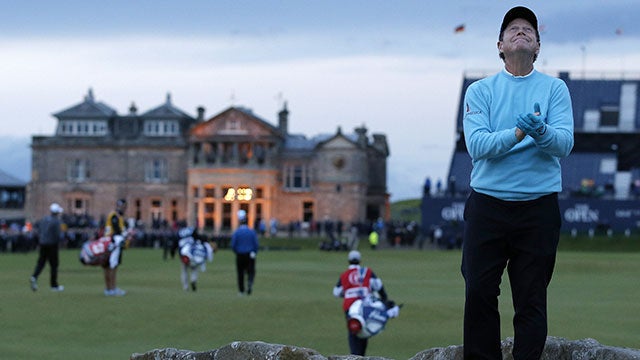 Tom Watson poses on the Swilcan Bridge as he marks his final round in any British Open on day two of the 2015 British Open Golf Championship on The Old Course at St Andrews in Scotland, on July 17, 2015.
Getty

Arnold Palmer’s presence at St. Andrews in 1960 restored the British Open to a legitimate major championship. His emotional goodbye in 1995 was equally monumental. Here are history’s most famous farewells to the Old Course.

In 1936, six years after he retired from competitive golf, Jones was sailing across the Atlantic to attend the Olympic Games in Berlin. He was persuaded to take a side trip to Gleneagles, and then Jones insisted on one final round, at St. Andrews. Word spread of Jones’ surprise visit and by the time he teed off, 2,000 spectators lined the first fairway. He posted 32-40, with a birdie at the final hole. He returned one last time in 1958, when he was presented with the Freedom of the City award, making him an Honorary Burgess of St. Andrews, the first American to earn such status since Benjamin Franklin. At the ceremony, he famously remarked, “I could take out of my life everything except my experiences at St. Andrews and I would still have a rich, full life.” Though nearly immobile due to the crippling effects of syringomyelia, a rare spinal-cord disorder, Jones toured the Old Course over the following days – via the first electric cart ever to be seen at St. Andrew – as captain of the U.S. team at the World Amateur Team Championship, now known as the Eisenhower Trophy.

After capturing the first two legs of the modern Grand Slam in 1960, Arnold Palmer was convinced by friend and business manager Mark McCormack that he needed to enter—and win—the British Open, which happened to be at St. Andrews that year. So low was the prize money, so arduous the travel, and so archaic the qualifying procedures that few Americans ever ventured there. Palmer didn’t win that year, finishing second by one stroke to Australia’s Kel Nagle, but he reinvigorated the tournament, elevating it back to major status. Palmer won it the next year, and again in 1962. He never would triumph at St. Andrews, but established the classic farewell gesture when he posed on the Swilcan Bridge in 1995, ending his British Open career with a missed cut on rounds of 83-75.

The Golden Bear compiled the greatest British Open record since the Great Triumvirate (Vardon, Taylor and Braid) by finishing in the top five every year from 1970 to 1980. Only once from 1963 to 1980 did he finish out of the top six, a 12th place finish in 1965. Nicklaus won three British Opens, two of them at St. Andrews, in 1970 and 1978. He couldn’t make the cut in his final appearance, shooting 77-73, but he did finish in style with a birdie at 18 in his final competitive round.

Slammin’ Sam made just five appearances in the British Open. One of them, however, was a four-stroke victory at St. Andrews in 1946. It wasn’t love at first sight with the Old Course. While on the train, he remarked to another passenger as they were passing it for the first time, “Say, that looks like an old abandoned golf course.” His final appearance was in 2000, when he competed in the four-hole Champions Challenge exhibition, ahead of the Open. ever the limber fellow, He danced a farewell jig on the Swilcan Bridge—at age 88. At age 60, Tom Watson bid farewell to St. Andrews. Then he did it again five years later. Beloved by the Scots, Watson captured five British Open titles, one away from Harry Vardon’s all-time record, but he never did win at St. Andrews. He came whisker close in 1984, losing to Seve Ballesteros. Most, including Watson, felt 2010 would be his final St. Andrews Open, which ended in near darkness with a missed cut on rounds of 73-75. Watson, however, had kept his skills so competitive that he would make cuts in three of the next four years. And so, one final goodbye in 2015, alongside son Michael, his caddie. In the typically wild weather where Watson once thrived, he came up short, on rounds of 76-80.

Three-time Open champion Nick Faldo grabbed one of his Claret Jugs in 1990, with a tournament record 18-under-par 270 at St. Andrews. While not a competitive golfer for at least a decade, focusing on his broadcasting duties and golf course architecture, Faldo showed the grit and fight that characterized him in his prime, rebounding from an opening round 83 with a superb 1-under-par 71. He missed the cut, but having his son Matthew on the bag and closing with a birdie on the 17th, the infamous Road Hole, then rattling in a four-footer for par at 18 left Sir Nick practically giddy.