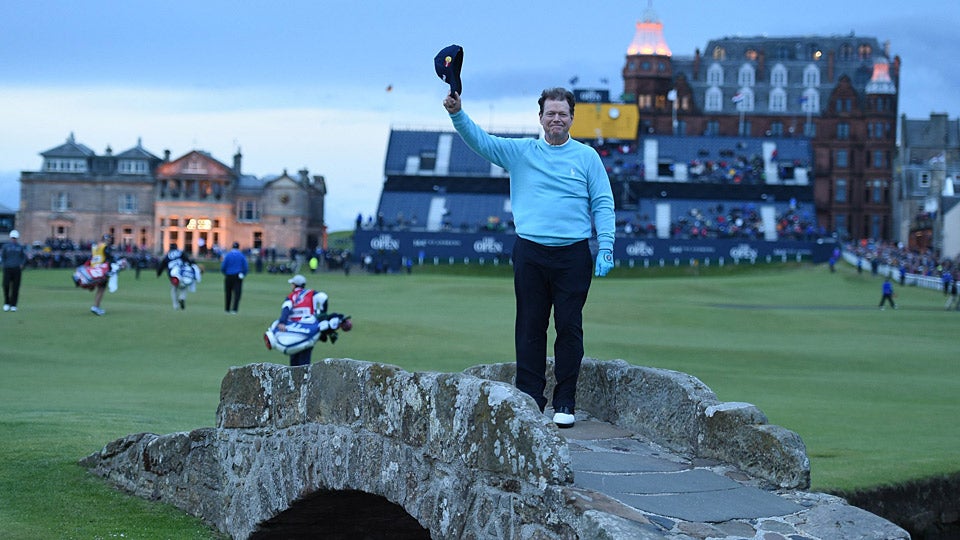 ST. ANDREWS, Scotland – It was a man playing golf, at night. It was also a trending topic on Twitter, an Internet meme, a photo op, and a five-hour moment that played right through cocktails, dinner and dessert. It was an excuse for a formal gathering at the Old Course Hotel to spill out onto the back patio and raise their cell phones, pointed at the man of the hour, giddy at the sight of themselves in gowns and tuxedos on this blustery night.

Tom Watson’s farewell tour around the Old Course at St. Andrews on Friday night, capping a 40-year Open career that saw him win five times between 1975 and 1983—and nearly win in 2009 to tie the great Harry Vardon with six titles—was all of these things. But it was also real.

“Thank you, Tom,” a man in a Maxfli ski hat said to Watson as the 65-year-old legend sauntered up to the 16th green.

Watson, 9 over par and destined to miss the cut, looked over at the man, Mr. Maxfli, and tipped his cap. The man smiled and exchanged a glance with his oldest of two boys, 9-year-old Sam, both of them beaming.

“My dad, who passed away last year, took me to my first Open when I was 7,” said the man in the hat, whose name was Mark and who lives in Liverpool, England. “It was at Birkdale in 1983, the last that Tom won. And now I’m with my own sons, the youngest of whom, Luke, is 7, and it’s his first Open, and we’re watching Tom in his final Open. There’s symmetry.” Thank you, Tom. Give us a wave, Tom. Watson heard it all day and he obliged, tipping his cap and waving his hand in its baby blue glove, the color of his sweater. He played with Ernie Els and Brandt Snedeker, with none of them scoring particularly well in the wind and occasional spitting rain.

Watson shot 80, Els and Snedeker 73. Only Els (even) will make the cut. Watson spoke before the tournament of trying to finish in the top 10, but he wasn’t nearly sharp enough. He laced his drive down the middle of the 12th fairway—and into a pot bunker, leading to a bogey. He very nearly did the same thing on 13. Had he forgotten where they were or did it just not matter enough to do the yardages anymore? His son Michael was on the bag for this, Watson’s farewell, in place of his regular caddie Neil Oxman.

Oxman was in attendance Friday night, along with Watson’s wife, Hilary, the two of them huddling up behind the 15th green and wondering aloud, like everyone else, whether there was enough light to finish.

Ridge Watson, Tom’s older brother by three years and a vintner from Carmel Valley, Calif., was scurrying around and cursing his decision to lose contact with Oxman, who would know the best place to watch from. Ridge’s wife was there. Friends from New York and Kansas City were there. 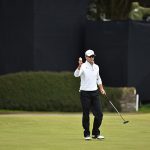 You may also like Best Photos from the British Open at St. Andrews

Who else? “Everybody,” Ridge said. He himself had been a Division 1 college golfer at Stanford, like Tom. “But I only played for one quarter and I had the shanks,” he said. “After that the coach, Bud Finger, asked me to give him back his golf balls. I wasn’t any good.”

Watson, Els and Snedeker huddled on the 17th tee to decide whether or not to try and finish. Watson deferred to Els and Snedeker, who deferred back to Watson. An official tried to tell them it was time to go in, Els said later, but he pushed back. To make Watson play two holes in a forecasted gale at 7 a.m. Saturday—what kind of send off would that be?

Playing largely by feel in the dark, they laced their drives and walked up the fairway to more cries and more raised cell phones. Snedeker double-bogeyed the hole, wrecking his chances of making the cut. On 18 the three posed for the obligatory Swilcan Bridge photos, and then the younger men turned and headed toward the green, leaving Watson and his son. Then his son moved out of the frame, leaving only Watson, looking up at the heavens.

What did it mean? Twitter supplied fast, easy answers. Surely, the consensus went, Watson was acknowledging his late caddie, Bruce Edwards, who died of ALS. (In his press conference later, Watson indeed mentioned Edwards, as well as other prominent figures in his life that have died.)

By the time they reached the 18th green it was simply too dark, and especially too dark for Watson’s 65-year-old eyes. He shanked his second shot, a pitch from just short of the green, leaving himself a tough two putt.

“You gotta hold it, son,” he said to his caddie/son Michael, meaning hold the flag. “I can’t even see it,” he added, meaning the hole.

Three putts later, Watson had made his fifth straight bogey. (“Man, that was ugly,” he said later.) And he was done. The crowd roared and Watson began to make his way though a receiving line that included his wife, Tom Lehman, Mark O’Meara, Graeme McDowell and many more.

He was determined not to cry, and even told Michael not to as they stood on the 18th tee, but you could see the tears as he was interviewed on TV. Then, exhausted, Watson met the writers, who broke with decorum and clapped as he entered the room. He offered thanks, apologized for rambling.

Tweets rushed in. Justin Rose: 5 times a claret jug winner. The Open will miss him but he will forever be a huge part of this. Webb Simpson, who played in front of Watson: Played the Old Course after sunset then got a front row seat for Tom Watson’s final shot @TheOpen. Tough to top that.

“It’s all a joy,” Watson said when it was all over. “There’s no reason to be sad. I played a game for a living and I did pretty well at it.”

“Now it’s time,” he added, “to get on to the real golf tournament.”