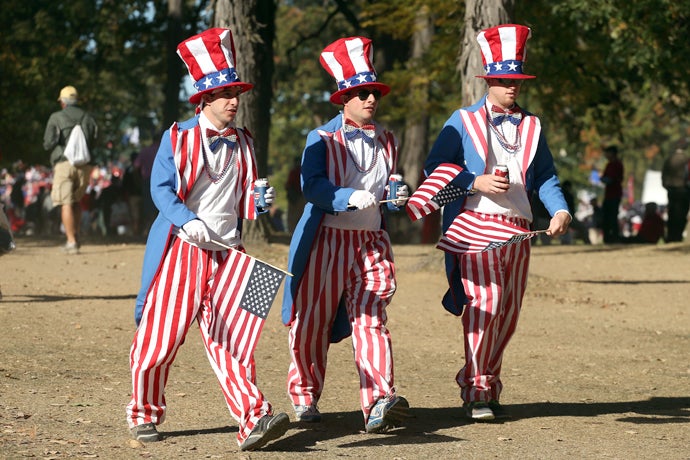 ‘Sup, bro? ‘Murica’s golf fans here. So, yeah, we read your essay and … OMG, it’s flipping hilarious! Did Ricky Gervais ghostwrite it? It made the rounds over here faster than a Kim K selfie. Especially loved the bit where you called us “fat, stupid, greedy, classless, bastards.” Guilty as charged!

As you’re no doubt aware, your screed (that’s a word, right?! We always confuse it with creed) has caused quite a stir around these here parts. But that was the point, right? Kick us while we’re down? The U.S. captain, DL to the 3, claims not to have read it, but your man Dazzer Clarke did. And, oofah, he was, like, totally NOT cool with it.

He darted out to the course to show the article to your bro. “He’s bitterly disappointed,” Clarke said later. Clarke added that your bro intends to speak to you about your zingers. Ooooooh, Danny Willett’s brother gonna get it! LOL!

As for Danny, he later told the Golf Channel that it was tough to concentrate today, because he was hearing it from the galleries. (Gawd, what will it be like for him come Friday? Or Sunday?!) He said he wanted to get off the course as soon as possible and get things “sorted” with Captain Love — you know, to make amends and distance himself from your delicious digs. Boohoo! Where’s his sense of humor? You sure you guys are brothers? 😉 Anyway, back to your column. You wrote that us dumb Yank fans could actually play an important role this week – you charmer, you! “For the Americans to stand a chance of winning,” you wrote, “they need their baying mob of imbeciles to caress their egos every step of the way.” We don’t know what half those words mean, but they sure sound impressive.

And you didn’t stop there! The Americans can only win “if they’re backed up by a giggling group of reprobates. Team Europe needs to shut those groupies up.” Preach, Danny Willett’s brother! Preach! “They need to silence the pudgy, basement-dwelling, irritants, stuffed on cookie dough and pissy beer, pausing between mouthfuls of hotdog so they can scream ‘Baba booey’ until their jelly faces turn red.”

Poetry, dog! You’re a regular Bill Shakespeare! Although it’s kinda rich you knocking our grub. We’d take cookie dough and pissy beer any day over blood pudding and flat, room-temp beer! And don’t you even get us started on your black socks and sandals. Kidding, Danny Willett’s brother! Kidding! We’re still good, right?

You know what — all this mudslinging is petty. You’d think we would have learned that from our debates! Point is, we’re so looking forward to these matches. You’re damn right we’re gonna be loud and maybe a little rowdy. That’s what happens when you lose three in a row and six of seven. You get a little cranky. Which means that bit in your article about wanting Rory and the boys to silence us “cretins” quickly at Hazeltine?

Don’t count on it, old chap.