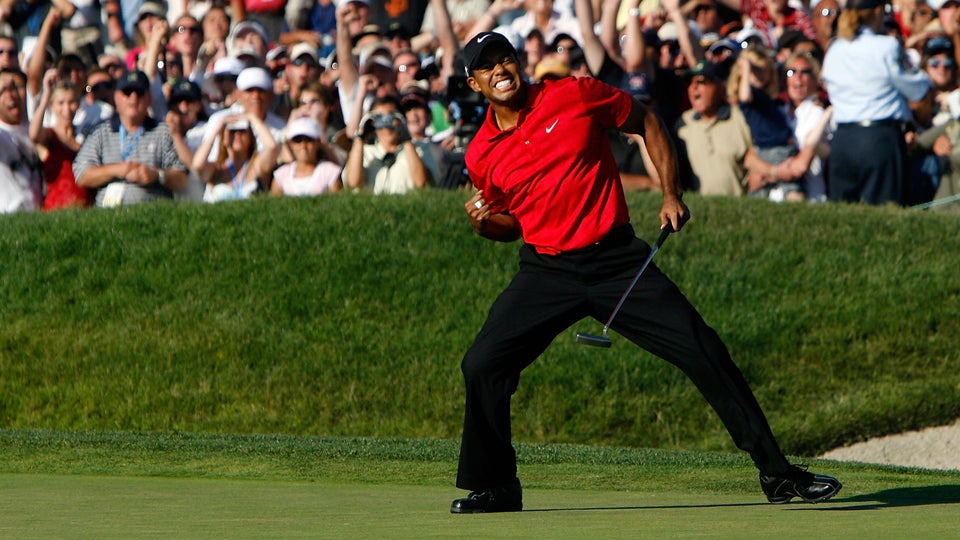 In my office at home I have a photograph taken milliseconds after Tiger Woods holed his do-or-die putt on the 72nd hole of the 2008 U.S. Open. Woods’ lusty double fist-pump celebration was instantly iconic, but my eyes always go to the throng circling the final green at Torrey Pines. Peeking over the shoulder of a gaggle of photographers is yours truly. Everyone in the photo is cheering but I’m laughing maniacally. The reasons are both idiosyncratic and universal. I was laughing because what else could you do in the face of such genius? Bumpy green, broken leg, insane amount of pressure…and Tiger brushed it in like a practice round gimme. It was so absurd, giggling seemed the only logical response. But it was also a mirthless laugh at my own misfortune. Allow me to explain.

That week in June 2008 happened to be the very first time SI was operating under a new, compressed production schedule. Prior to that, we sent the magazine to the printers late Monday nights. But that Monday at the Open we were operating under a tighter deadline: the mag had to be buttoned-up by 1 p.m. California time, which was roughly when Woods and Rocco Mediate would be finishing their 18-hole playoff. I was laughing because I knew I was utterly screwed.

That Sunday night, at my hotel room in San Diego, I wrote two 3,000 word stories. One was celebrating Woods for the grittiest victory of his career. (A few spots were left open to insert details of the playoff.) I finished that story around 2 a.m., had a celebratory room service slice of cake, and then wrote until sunrise the account of a heroic Mediate producing an upset for the ages. There was plenty of fodder for each story. The details of Woods’ double stress fracture in his left tibia wouldn’t be made public until later, but he was clearly hurting. In his diminished state he produced some wildly uneven golf, including four double bogeys.

But he also torched his back nine on Friday in 30 strokes, and Woods’ final flourish on Saturday remains legendary. He had played the first 12 holes in 3 over par and looked to be running out of Band-Aids, but on the 13th hole he buried a big-breaking, downhill 65-foot eagle putt. On the 17th hole he jarred a chip for birdie and then at 18, after two perfect shots, faced another eagle putt. Back then, Woods had a metaphysical mastery of the moment, a singular ability to seize an opportunity that his third-round playing partner Robert Karlsson described as “freakish.” Watching Woods stalk his 30-foot putt, Karlsson, like everybody else, considered the outcome preordained. “No doubt,” said Karlsson. “That putt was just in.” And so it was.

At that point, Woods was 13-for-13 closing out 54-hole leads at major championships, but he was shaky on Sunday, double-bogeying the first hole again (his injury made it impossible to warm up properly) and later bogeying 13 and 15 to cough up the lead. It took his spectacular birdie putt on the 72nd hole to force the playoff and set up my misery.

After my all-nighter, I straggled to the course to monitor the playoff from the press room, tweaking each story continuously depending on who was doing what. When Mediate bogeyed 9 and 10 in the playoff he was down by three strokes and I was ready to delete the file about his hypothetical victory. But he birdied 13, 14 and 15 to surge into the lead and in my sleepless state I could barely deal with this reversal of fortune. Naturally, Woods birdied 18 again to extend the playoff — are you freakin’ kidding me?! — and when Mediate bogeyed the 19th hole Tiger had his myth-making victory.

In a scrum before his formal press conference I asked Tiger how this victory compared to all the others. “I think this one is the best,” Woods said, “just because of all the things I had to deal with.” I phoned that in to the New York office and the printers started rolling. Two days later I pulled the issue out of my mailbox, with Woods on the cover.

I just reread both stories. The Mediate narrative is groan-inducing good fun, a time capsule from an alternate universe. One line in the Woods piece really struck me: “With his 14 career majors Woods has crept ever closer to Nicklaus’s epic total of 18, and it is mind-boggling to think that at 32 he is potentially one great calendar year away from attaining the unattainable.”

How could we possibly have known then that we were witnessing the zenith? Woods lost the rest of 2008 and the first two months of ’09 to surgery and physical therapy. He played well upon his return but was not quite the same, missing opportunities to win at the Masters and U.S. Open, missing the cut at the British and then getting Y.E. Yang’d at the ’09 PGA Championship. Three months after that epic upset, Woods’s life was torn asunder in the biggest sex scandal of the Internet age. So Torrey Pines will always be peak-Tiger, the ultimate example of his scoring gifts and iron will. No matter how much it inconvenienced certain sportswriters, we were all lucky to witness it.