Tiger Woods Will Not Play the Honda Classic 2015

Tiger Woods withdrew from the Farmers Insurance Open during the second round.
Getty Images

Tiger Woods will not play in next week’s Honda Classic at PGA National in Palm Beach Gardens, Fla.

With the entry deadline fast-approaching, tournament officials and Woods’ agent confirmed that the former world No. 1 would not be in the field.

Woods’ agent, Mark Steinberg, also addressed whether or not his star client would be at Augusta in April, according to ESPN.com’s Bob Harig.

“He doesn’t look at this with any time deadline right now,” Steinberg said. “Does he expect to be at the Masters? Yes, of course. But that doesn’t mean that is where he expects to debut. He just doesn’t know where. I think Tiger would tell you he’d be shocked if he wasn’t at the Masters.”

In a message posted to his website last week, Woods announced that he would take an indefinite leave from golf while he worked to improve his game.

“My play, and scores, are not acceptable for tournament golf,” Woods said in the blog post. “Like I’ve said, I enter a tournament to compete at the highest level, and when I think I’m ready, I’ll be back.”

He then spoke directly about his chances of teeing it up at the Honda Classic.

“I won’t be there unless my game is tournament-ready. That’s not fair to anyone.” 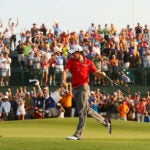 You may also like Greatest Seasons of the Tiger Era — Tiger Woods, Rory McIlroy, Vijay Singh

Woods opened his season with a missed cut at the Waste Management Phoenix Open after a disastrous second-round 82, his worst-ever round on the PGA Tour.

The following week he withdrew from the Farmers Insurance Open at Torrey Pines after completing only 11 holes in the second round.

Woods is working through a swing change with his new coach Chris Como.

You can see the full confirmed field for the Honda Classic here.