Tiger Woods has done a ton of press (at least for Tiger Woods) leading up to his return to the PGA Tour this week at the Farmers Insurance Open, and we’ve learned a lot of personal tidbits about the 14-time major champ. Thanks to one of the newest interviews, we now know which actor (or actors) Tiger would want to play the leading role in a movie about his life. 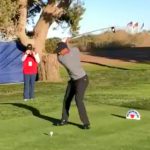 You may also like WATCH: Tiger’s slo-mo swing in his first practice round at Torrey Pines

Woods sat down for a rapid-fire Q&A to promote the Genesis Open, the PGA Tour event held at Riviera CC that supports the Tiger Woods Foundation. One of the questions Tiger faced was, “Which actor would play you in a movie about your life?” Woods didn’t hesitate with his answer.

“I would have to say Denzel [Washington] as the younger version, and Samuel L. Jackson as the older me.” Who wouldn’t want a two-time Oscar winner and one of the highest-grossing movie stars of all time to play them on the silver screen?

Here are a few other of Tiger’s favorites according to his answers.

Preferred walk-up song: “Return of the Mac” by Mark Morrison.

Woods has already committed to playing in the Genesis Open, which runs Feb. 15-18 in Los Angeles. You can listen to all of Tiger’s responses below.

With the @GenesisOpen only a couple weeks away, we quizzed @TigerWoods with some L.A. trivia… Hear his responses! #GenesisOpen pic.twitter.com/XIoHDw9eYR