Tiger Woods Thinks He Can Win the Greenbrier Classic

Tiger Woods will play the Greenbrier Classic this week for the second time in his career.
Getty Images/Harry How

Fresh off shooting the worst 36-hole score of his career at the U.S. Open, Tiger Woods sounds as confident as ever.

After a pro-am at the Greenbrier Classic, Woods answered a reporter Wednesday who asked if he can win this week without missing a beat.

Since he carded rounds of 80-76 at Chambers Bay, Woods says he’s made “some nice progress,” but also “didn’t touch a club for awhile” and spent a few days fishing and snorkeling with his children in the Bahamas. He blamed his play at the U.S. Open on a combination of course difficulty, poor ball striking and small injuries, including a blister that still hasn’t healed.

“You had to be aggressive and pick your spots [at Chambers Bay],” Woods said. “I wasn’t hitting it well enough to do that.”

Woods then compared his current slump to a stretch he went through nearly 17 years ago shortly after winning the 1997 Masters.

“I’ve done this before,” Woods said. “I’ve gone through stretches like this. If you look at what I did through the end of 1997 and all through 1998, it wasn’t very good. I had some top 10s in there, but I wasn’t really contending. I was trying to make cuts.”

With a grin, he then added: 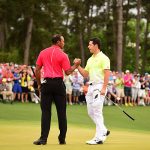 That may be the understatement of the century—Woods went on to win five of six majors from the 1999 PGA Championship through the 2001 Masters. But to compare current form to ’97-’98 isn’t exactly fair. From the 1997 British Open through the end of the 1998 season, Woods racked up 15 top-10 finishes and only two missed cuts. Since his last victory—the 2013 WGC-Bridgestone Invitational—Woods has only one top-10 finish, three missed cuts and three WDs in 18 starts. Woods used to define struggling as not winning. A lot has changed since then, both physically and mentally.

Many have criticized Woods for spending too much time psychoanalyzing his game and not enough playing events and simply getting the ball around the course. The fact that Woods’ current coach, Chris Como, bases his theories in biomechanics only makes those critiques easier to write. How does Woods respond?

“One, I don’t read it,” he said. “I have to live it. I know what I’m doing out here on the golf course; I know what it feels like. And I know where my game’s at and what progress I have or haven’t made.”

If Woods’ play in the Greenbrier Wednesday pro-am was any indication, he actually has made significant progress since Chambers Bay (he reportedly hit every fairway and every green on the front nine Wednesday). But Woods always seems to have his A-game Wednesday. Thursday through Sunday is a still different story.

Woods has played the Greenbrier Classic only once since the tournament began in 2010, missing the cut in 2012 after rounds of 71-69. Given recent form, he’d likely be happy to open this year’s event with those same scores.

A few highlights from Tiger’s practice round this morning… http://t.co/jdXwplGfsO