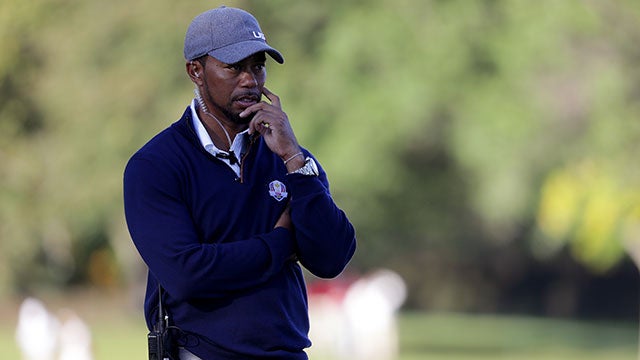 Vice-captain Tiger Woods of the United States looks on from the 14th hole during afternoon fourball matches of the 2016 Ryder Cup at Hazeltine National Golf Club.
Getty Images

Tiger Woods is still on schedule to return to competitive golf at next month’s Hero World Challenge.

Woods’ agent Mark Steinberg recently told ESPN that Woods is “getting after it a bit more, continuing to work toward that goal and excited to get back out there and compete, see the guys and be in the locker room instead of being an assistant captain.”

Woods committed to the Safeway Open and Turkish Airlines Open in October, then withdrew from the Safeway the week of the event citing a “vulnerable game.”

The last remaining event on his schedule is the Hero World Challenge, an 18-man exhibition that Woods hosts each year, on Dec. 1-4 in the Bahamas. Steinberg tempered expectations in the interview by saying “it’s going to be 15 months since the last time he played competitively,” but he provided no indication that Woods won’t at least tee it up.

“The determination is still there,” Steinberg said. “We’ve still got two weeks to go, but he is doing the things necessary to get himself as ready as he can be.”