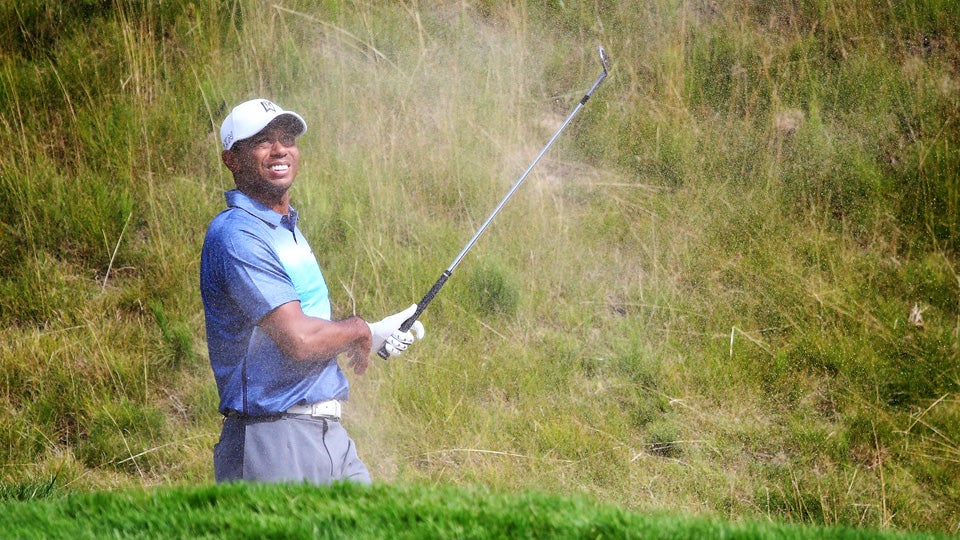 Tiger Woods watches a bunker shot on the 18th hole during the first round of the PGA Championship at Whistling Straits on Aug. 13, 2015, in Haven, Wisconsin. Woods shot a first-round 75.
Tom Pennington/Getty Images

HAVEN, Wis.—Tiger Woods shot 75 in the first round of the PGA Championship. By tradition, and the edicts of my superiors, I’m compelled to comment on it, even though I don’t really want to. I doubt you, the reader, is that interested, either. But here we are. Tiger Woods shoots 75 and we all have to pretend like it matters, which it doesn’t. We all knew Woods wasn’t going to win this championship, despite his half-hearted attempts to convince us otherwise. This sad 75 just makes it more of a certainty. He is already nine strokes off the lead, having enjoyed a soft golf course on a mild morning with very little breeze. The course will play much tougher for Woods’ second round on Friday afternoon. It will rate as a surprise if he can match his 75. This is where we are – the most dominant golfer of all time is now fighting for the tiniest of moral victories.

It has been exhaustively chronicled how we got to this point: scandal, injury, swing confusion, existential crisis. I don’t have the energy to go through it all again. With Woods these days we look for the tiniest rays of hope. That arrived, sort of, when he hit the first seven greens in regulation during the first round. But that stretch still featured two badly blocked drives and enough imprecision with his irons that he was left very long birdie putts, none of which were converted, with a three-putt thrown in to push Woods to plus-1. On the par-5 16th hole—Tiger began his round on the back nine—he scrapped his way back to even par with a gorgeous pitch to kick-in range. Then at 17 we were treated to a bit of vintage magic, a spectacular up-and-down from a nasty lie in a greenside bunker. Now there was a little buzz in the air. Was this the round that would turn around Tiger’s season? Or, at the risk of being melodramatic, his life? It was not. On any given shot, Tiger Woods can still look like Tiger Woods. But now he is utterly incapable of maintaining the illusion for any sustained amount of time. At 18 his approach shot lacked the proper conviction and expired well short of the green, in a bunker. A so-so sand shot and indifferent putt forced Woods to rattle in a three-footer to save bogey. Just like that, the momentum evaporated. He failed to birdie the easy par-5 second hole after tugging his third shot way left of the flag and then bogeyed the next two holes, (no) thanks to a three-putt followed by a bad tee shot. In the space of an hour we had gone from hoping for a renaissance to fretting about the cut line. That’s how quickly Woods’ game now comes and goes. And our hope with it. 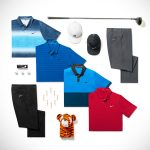 You may also like PGA Championship 2015: What the Pros Are Wearing at Whistling Straits

Afterward he said, “Well, I hit it great today”—this is tad hyperbolic but since it’s Tiger’s quote we’ll let it go—“but I made actually nothing. Probably one of the worst putting rounds I’ve had in a very long time…I just had no feel at all for the speed. It was awful.” Which is funny, because two days earlier, in his pre-tournament presser, he had said, “The greens are absolutely perfect. They’re such a great speed and so smooth.” This is of a piece with Woods hitting it beautifully on the range then spraying a wild shot off the first tee – maybe the most imperious golfer ever now has stage fright. In each of Woods’ last six major championships he has been over par in his opening nine holes.

On Friday, Tiger Woods will play the second round of the PGA Championship. It has a macabre significance, as it may bring a jarring denouement: if Woods misses the cut he’s done for the season. No FedEx Cup playoffs, no Presidents Cup. We will watch, and comment upon it, and some of you may be drawn in by the spectacle. Following Woods used to bring joy, or awe, or, at the very least, excitement. Now, sadly, it’s merely a chore for all of us.