On Monday, Tiger Woods posted to Twitter for the first time since his Memorial Day DUI arrest, saying that he is receiving professional help to manage the medications he takes for back pain and a sleep disorder.

In the statement, Woods also thanked fans and players. “I want to thank everyone for the amazing outpouring of support,” he wrote.

Woods passed two breathalyzer tests on the night of his May arrest. He was found asleep at the wheel by police in Jupiter, Fla. Woods said that he had had an unexpected reaction to prescription medications.

“I’m not at liberty to say where he is, but he is receiving in-patient treatment,” Steinberg said. “Tiger has been dealing with so much pain physically. And that leads to insomnia and sleep issues. This has been going on for a long time.” 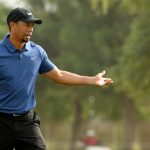 You may also like Report: Tiger Woods told police he was on Xanax at time of arrest

Steinberg postulated on whether Woods’s Memorial Day arrest was a tipping point for him. “He’s now gone and checked himself into a facility. He’s been in pain for so long. He’s had to handle the pain, which then potentially leads to the lack of sleep because you’re in so much pain.”

The 14-time major-winner last played competitively in Dubai in February. He withdrew prior to the second round due to back spasms. His arraignment has been postponed from July 5 to August 9.

Read the full statement below.