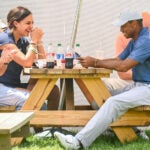 Rory McIlroy, Henni Koyack, Tiger Woods and Rob McNamara sat down for lunch after the third round at the Northern Trust.

On Saturday afternoon, after Tiger Woods and Rory McIlroy finished off their respective lackluster third rounds at the Northern Trust, they did something unusual: They found a picnic table outside the media tent and had a cheeseburger lunch.

The sight of Woods and McIlroy (plus Woods’ buddy Rob McNamara and GolfTV’s Henni Koyack) was just the latest new sight in a season filled with them. The idea of either high-profile golfer casually dining outside after a round would be unthinkable at TPC Boston, which is typically packed with rabid fans. But there they were, sharing laughs over Diet Cokes under the beating New England sun.

Really, the entire weekend felt anomalous for Woods and McIlroy. It was strange seeing two of the game’s biggest names paired together for what amounted to meaningless rounds on both Saturday and Sunday, each well outside the top 50. Once a high finish became out of the question, Woods and McIlroy seemed more relaxed and chattier than usual. Each has won at TPC Boston before; this was decidedly different.

After their round on Sunday, Woods and McIlroy each made a series of insightful remarks in discussing just how strange everything feels on Tour at the moment. For two players who feed off the energy of the crowd, things feel a bit off.

“This is going to sound really bad,” McIlroy said. “But I feel like the last few weeks, I’ve just been going through the motions. I want to get an intensity and some sort of fire, but I just haven’t been able to. And look, that’s partly to do with the atmosphere and partly to do with how I’m playing. I’m not inspiring myself, and I’m trying to get inspiration from outside sources to get something going.”

He has spoken in recent weeks about the sameness of the events without fans, and it’s understandable; there’s no way to replicate the feeling of a large-scale Tour event. Graeme McDowell said he felt like a “golfing zombie” earlier this week; McIlroy agreed with that assessment.

It’s always interesting seeing McIlroy process things in real time in his press conferences, and that was certainly the case as he tried to brainstorm motivational tricks on Sunday. Sometimes it helps to set up another game inside his head, he said, or to make a bet with his caddie.

“Maybe that’s the strategy,” he said. “I do that in practice rounds sometimes with Harry (Diamond) and we make a lot of bets and I try to shoot scores and try to win dinner, whatever it is. Maybe that.”

What’s funny is the idea that McIlroy would get more engaged playing his caddie for dinner than merely playing for the FedEx Cup, which has a $15 million first place prize — a prize McIlroy won last season.

“You’ve got a lot of incentive here to play well,” he acknowledged. “It’s just trying to get it out of you.”

Woods said that he’s used to deriving his own energy from the feeling in the crowd.

“Always have,” he said. “I’ve played in front of thousands of people ever since I turned pro 24 years ago.

Woods allowed that there are some perks; it’s an undeniably easier existence this way. Practice rounds in particular have been a breeze. “It’s always been odd when I haven’t played in front of people, and you know, in one way, it’s been nice between tees not getting tapped or getting a glove pulled out of my pocket. Those are things I’ve had to deal with for a very long time.”

In total, though, Woods would much prefer the vibe of the crowd.

“You hit good shots and you get on nice little runs, we don’t have the same energy, the same fan energy,” he said. “It is different.”

On the course, Woods is, at times, demonstrative but more often inscrutable. He knows he’s being watched, fans or not.

“I’ve played in front of cameras for the last 24 years, and so people have always looked for emotion or tried to get under my hat, photographers,” he said. “So that hasn’t changed. Probably have more crews now following me because when I pull in the parking lot, they have film crews, I walk in the clubhouse, everywhere I go, every range session, putting session, every shot is being dissected.”

Both Woods and McIlroy agreed that other players get an advantage from the small crowds.

“Absolutely,” Woods said. “Anyone who has played in front of thousands of people, it is very different. Usually between 20,000 and 40,000 people screaming and yelling. That’s always been one of the things I’ve become accustomed to; the guys who played with me, who haven’t become accustomed to it, they have only experienced one round here and there; that’s been every round I’ve played for over two decades.

“That advantage, for me and some of the other top players that have been out here for a while who have experienced it, trying to deal with all that noise and the movement, that experience is no longer there.

“Also, I think that’s one of the reasons why you’re seeing more lower scores now,” he added, just two days removed from Scottie Scheffler shooting 59 and Dustin Johnson shooting 60 on the same day. “You don’t have the same type of energy. Guys aren’t shooting as high of rounds as they normally would.”

McIlroy has been open in discussing the challenges of playing with Woods in competition and dealing with all the associated distractions. But he still thinks that he’s much better attuned to playing in front of a crowd than are newcomers to the Tour, who might be gaining an advantage in a fan-free world.

Whatever the reason, McIlroy and Woods are each looking to get their games out of neutral. Woods logged his third consecutive finish outside the top 35, while McIlroy hasn’t notched a top-10 in seven starts since the Tour’s restart.

They’ll each head to the BMW Championship in Chicago next week looking for a spark — and, for Woods, looking to move up in the FedEx Cup so he can crack the top 30 and return to Tour Championship the following week. Woods will try to keep the math simple.

“I don’t know what the number is going to be for me to move on to East Lake, but obviously a W definitely gets it done,” he said.

A handful of volunteers would gladly applaud if he did.