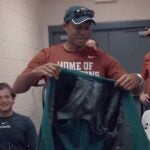 Tiger Woods — and his green jacket! — made a special guest appearance in the Stanford Cardinal locker room.

Though Tiger Woods only spent two years as a Stanford University golfer before embarking on his pro career, but he’s been a devout fan of the Cardinal ever since.

Over the years, Woods has been frequently spotted on the sideline at football games, and one seemingly newly-released video of him addressing the team is quickly gaining steam on Twitter.

The video was released by Stanford Football’s Twitter handle on March 9th — the date of Woods’ induction into the World Golf Hall of Fame.

In the video, Woods addresses the team in the locker room ahead of their highly-anticipated game against the University of Central Florida in September 2019.

“I wore this shirt for a reason,” Woods begins. “We are the home of champions. What is a champion? A champion is a person who doesn’t always win, but we fight to the very end. Gives his life, his soul, heart, everything he has at all times.”

Woods then reaches down into a backpack.

“So I decided to bring something that …”

At this point, he unravels — gasp! — the green jacket, which he won for the fifth time just five months earlier. As the team whoops, Woods continues.

“To help you guys understand what it’s like to put your whole life and everything you have into something that means so much to yourself,” Woods says. “Coach, c’mere.”

Woods then approaches Stanford head coach David Shaw with the open jacket. As Shaw backs away, Woods presses in, and places the jacket on Shaw as the team cheers. The two then share a warm embrace.

What a moment. Shaw removed the jacket quickly, but the gesture was incredible.

Unfortunately, Stanford ended up losing to UCF that night, 45-27, but given that pre-game pep talk, motivation certainly wasn’t the problem.

Shop our selection of cool gear