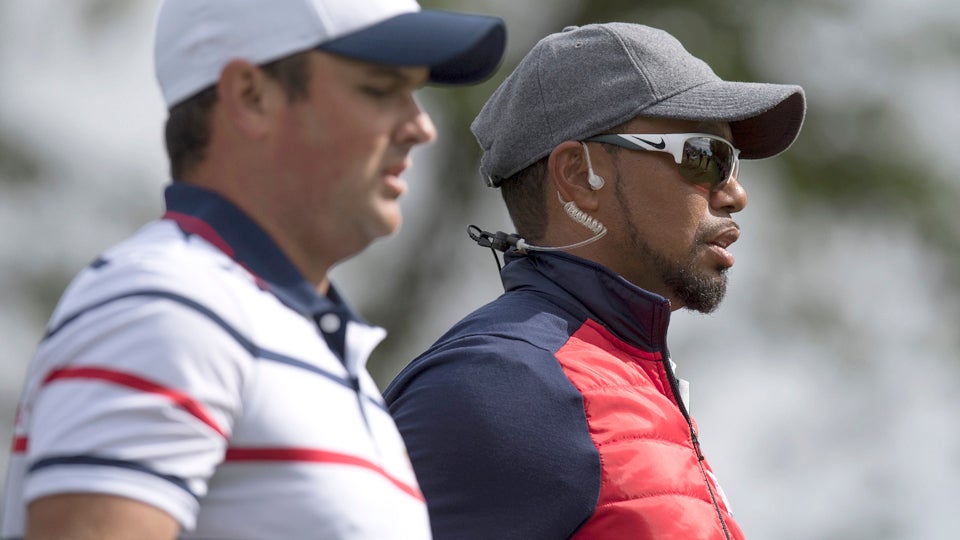 Patrick Reed says having Tiger Woods on the team is already paying off.
JIM WATSON/AFP

CHASKA, Minn. — The other members of Patrick Reed’s foursome, or pod, didn’t want to play a second nine holes Tuesday because it was too windy.

But Reed wanted to see the back nine. So he decided he would walk it, starting at 18 and going backwards. The vice captain overseeing Reed’s pod immediately volunteered to go with him.

That would be Tiger Woods.

“He was like, ‘All right, well, let’s go,’ and he walked it with me,” Reed said Thursday morning. “He helped me figure out the golf course. You don’t get that very often and to have somebody do that for you, especially a guy like Tiger Woods, it meant a lot.”

If the Reed-Tiger combo platter seems like an Odd Couple, maybe that’s because anyone with Tiger seems like an Odd Couple. As a competitor, Tiger remained aloof and separate from the other players—superficially friendly and all that but in a limited way. He was there to beat them, not bond with them. Maybe Reed and Tiger are a good fit because that is also Reed’s style, too.

It is also odd because this is the first time any of us have seen Tiger in a non-playing team role. Which was why it was funny on Tuesday during a players-only team photo that Tiger forgot he wasn’t supposed to be in the picture and had to be asked to step away. So far, Woods has resisted the temptation to hit a couple of shots on the range with the guys. He’s returning from back surgery and plans to play in a few weeks at the Safeway Open.

“No, he has not swung a golf club this week, unfortunately,” Reed said. “We are all pushing him to but he’s not going to do it.” That nine-hole walk with Tiger turned out to be a big deal for Reed, a learning experience.

“Tiger was just kind of watching and seeing how I do my thing,” Reed said. “After two or three holes—he’s played the course before—he’s like, Well, this green slopes this way so if you miss the green, the ball should go there.’ So he throws the balls over there and says, ‘This is where you need to be chipping,’ and that kind of stuff.

“It’s impressive the way his mind works on the course. It shows why he has won so much. It was amazing. I learned so much, I felt like that nine-hole walk alone could save me so many shots throughout my career just by thinking about the little details. It’s not rocket science. It’s stuff that I should have been thinking about. The experience and expertise he shared with me this week has been awesome.”

VAN SICKLE vs. SHIPNUCK: Who Wins The Ryder Cup?

Based on Reed, you might already be able to call The Tiger Experiment, or whatever you call it, a success.

Reed had praise for others advising him on this team, including teammate Phil Mickelson, vice captain Jim Furyk and captain Davis Love.

“These older guys are the ones who can bring a group together,” Reed said. “I have the easy part of the job. I just go out and swing a golf club and try to earn a point. Those guys are trying to lead the team.”

Reed, best known for his Ryder Cup move two years ago when he shushed the Scottish crowd after making a big putt, said he hoped the American fans at Hazeltine National would be compassionate this week. Danny Willett’s brother, Peter, made some insulting remarks about Americans in a story he wrote for a British newspaper. Danny Willett and European captain Darren Clarke have apologized for the quotes and tried to distance themselves from it but even Wednesday, some savvy fans were already letting Willett hear about it.

“There’s a saying I’ve lived by, forgive and forget,” Reed said. “Everyone has said things that have been great or made comments they haven’t liked. It’s unfortunate because it wasn’t something said by Danny and this is his first Ryder Cup. The last Ryder Cup was my first one and it’s such a special and awesome moment. To have something distract you from enjoying it is unfortunate.

“I heard his family was so embarrassed, they were thinking about flying home. To me, that’s something that just can’t happen. I hope the fans can put that aside, forgive and forget, and allow Danny and the rookies on their side to enjoy this week because this is a special moment. You dream about these things. I hope the best for Danny and his family and hope they enjoy the week and our fans don’t just completely annihilate them.”