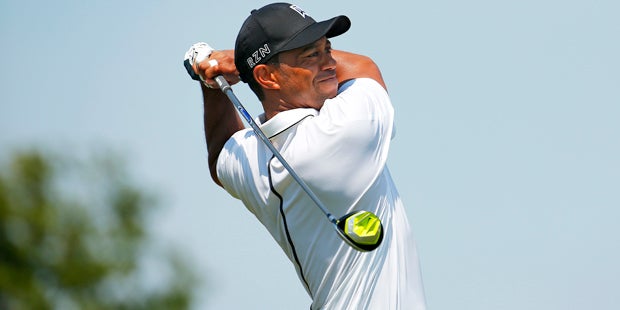 Tiger Woods didn’t need to elaborate on why he’s returning to Torrey Pines this week.

“Eight times,” he said, “and once as a junior, so technically nine. I like that place.”

“Eight” refers to how many professional wins Woods has at Torrey, which was also the site of his 2008 U.S. Open victory. This week it’s the venue for Woods’s first PGA Tour start since August 2015, when he tees it up for the first round of the Farmers Insurance Open on Thursday.

But even with the Genesis looming, the majority of the questions asked were on the state of Woods’s game, and health, as he prepares for this week. “I’m excited about playing,” Woods said. “I feel like I’m playing well and just need to get some tournament rounds under my belt.”

He has plenty scheduled. The Farmers Insurance Open will be Woods’s first of four events in a five-week stretch. He’ll also play the Omega Dubai Desert Classic (Feb. 2-5), Genesis Open (Feb. 16-19) and The Honda Classic (Feb. 23-26).

TOUR CONFIDENTIAL: How Will Tiger Woods Fare in His Return?

He admitted the busy schedule and overseas travel is a concern, but it’s something he has to deal with.

“I just need to get out there and do it and see what happens,” he said. “I feel like I’m strong enough to be able to handle the workload, but I still got to go out there and do it. Feeling good about it and doing it are two different things.”

Woods last played at his own event, the Hero World Challenge in the Bahamas in early December (which is an unofficial PGA Tour event). It was his first start since he missed more than a year recovering from two back surgeries. He led the field in birdies and bogeys and finished 15th out of 17.

Woods said he’s played four to five times per week at home since the Hero and that the only club he’s replacing in his bag since that tournament will be his TaylorMade M1 3-wood (no word on what he’s replacing it with).

He said his back will be the No. 1 factor going forward.