Tiger Woods Played Better When He Played for a Greater Cause 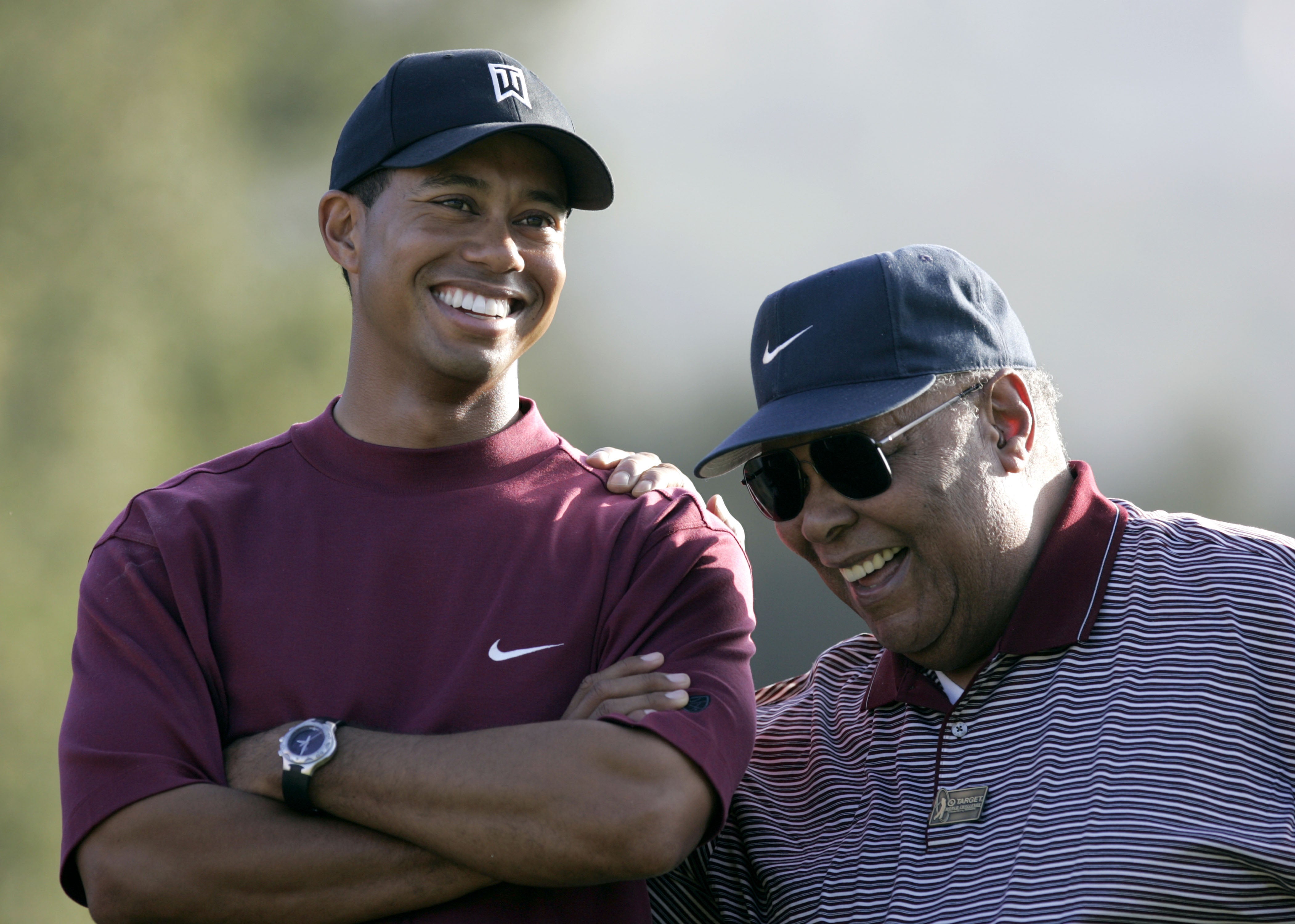 Tiger Woods and his father, Earl, in 2004.
Getty Images

When Tiger Woods was 14, he gave maybe his most interesting interview ever, to Trans World Sport, a TV program produced by IMG. It was recorded in November 1990, around the time his father, Earl, started a paying gig as a talent scout with the sports marketing company. In it, Tiger shows astonishing maturity, although at times you don’t know if he’s answering as himself or as a stand-in for Earl.

Tiger — sitting in a golf cart, a retainer on his upper row — is asked about being a black kid in a white man’s game. How often does he face racism?

“Every day,” Tiger says. “Not every day, but every time I go to a major country club. You can always feel it. You can always sense it. ‘What are you doing here? You shouldn’t be here.'”

Tiger is asked how he might influence the game. The interviewer mentions Jack Nicklaus. Tiger says, “Since I’m black, I might even be bigger than him — to the blacks.”

I thought of that interview when Woods, at his lost-tooth press conference in January, made a quick and amusing reference to the lack of “brown dudes at ski races.” How often do you hear Woods voluntarily bring up race? Never. But it’s on his mind. It has to be. Because he’s a brown dude living in a country that has proven itself incapable of turning a blind eye toward race.

Some people who knew Earl say he was a racist. My guess is that it’s more complicated. He was born in 1932, three years after Martin Luther King, and grew up in a segregated country many of us know only from John Howard Griffin’s Black Like Me. The long father-son hug when Woods won his first Masters at 21, by 12 shots, was partly rooted in an emotion only the oppressed would truly understand: We showed them.

Augusta’s troubled history with race is a tired subject, and in recent years the club has, in ways, reinvented itself. That history could not be a motivator for Woods anymore. But it once was, and it makes you wonder: To what degree did the racist history of golf in America motivate Earl when he was raising Tiger in the game? The stakes were impossibly high. Earl was raising a son engineered to beat the world first and change it later.

No old-timey American golf club, its clubhouse walls lined with portraits of long-dead mustachioed presidents, plays a role in Woods’s fantasy life. Ben Crenshaw can get choked up talking about Chicago Golf Club. Tiger’s not built for that. He’s happy to play 36 at Medalist in South Florida in a cart, but he’s in no rush to play two with club caddies at Baltusrol.

He’s won his three U.S. Opens on public courses: Pebble Beach in 2000, Bethpage in 2002 and Torrey Pines in 2008. To me, Woods was making a statement with those wins in our national open. He was taking a stand for public golf. Yes, I’m saying that the venues themselves provided extra motivation on a subliminal level Woods himself could likely not identify. You’re welcome to call me crazy.

I was at Woods’s second of three U.S. Amateur wins, at Newport (R.I.) Country Club in 1995, when the grand old lady was already north of 100. I was struck by how ungracious Woods was at the closing ceremony, barely nodding to the club or the USGA or to Buddy Marucci, the man he had just defeated. I was probably expecting too much from a rising sophomore at Stanford and was too wedded to the example set by Nicklaus, so graceful in victory and defeat. Big Jack took his cues from Bobby Jones, who has come down to us as the very figure of gentility — the great Robert Tyre Jones, who created Augusta National in his own image.

At the 1995 Am, when it was all over but the shouting, Earl stood with a small group nearby, raised his son’s trophy up high and said, “This is for you, Bobby Jones. I hope you’re rolling over in your grave, that it’s going to a black man’s home for another year.” It was a crass but effective illustration of We showed them.

At the end of the Trans World Sport interview, Tiger was asked what one tournament he most wants to win and why. “The Masters,” the teenager says. “[For] the way blacks have been treated there. If I win that tournament, that would be really big for us.”

The 2009 stiletto parade and all that followed changed Woods. How could it not? He started playing, as Hank Haney quotes Woods saying in his book, “only for myself.” That’s the ultimate swing thought, really. Why are you even playing?

Tiger’s golf was better and more meaningful when he was playing for a greater cause. But that was then, and it is what it is.