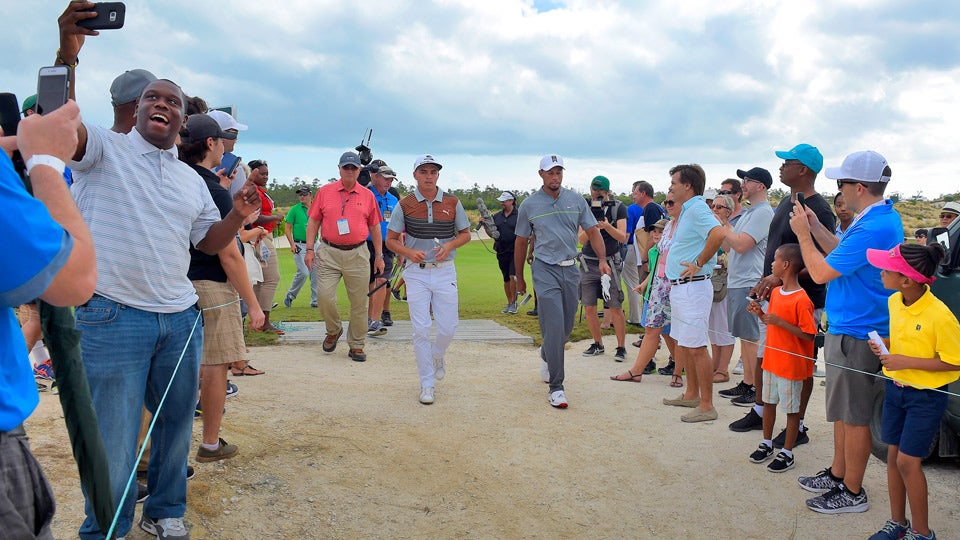 Now it gets interesting.

Actually, scratch that — Tiger Woods’s return this week at the Hero World Challenge was already fascinating. What credible golf fan hasn’t at least glanced at the headlines flowing out of the Bahamas? No, we have already sailed past the point of novelty. Now it gets serious. On a breezy, overcast Saturday afternoon, Woods rang up seven birdies against three bogeys and one double for a 2-under-par 70. His final score could’ve been better if not for some scratchy play over the closing holes that knocked him out of contention to win.

But Woods has already exceeded most reasonable expectations for his return after a 15-month layoff. That layoff, it should be reminded, followed two back surgeries, missed cuts at the U.S. Open, British Open and PGA, several alarmingly high scores — including an 85 at the Memorial — and a litany of flubbed shots and on-course gaffes that made you wonder if the 14-time major champion would ever again play golf competently, let alone competitively.

It’s all still a little dizzying, but here is where Woods stands: 8 under par, 10th place, 11 shots behind the leader, Hideki Matsuyama. Woods is not going to win this golf tournament, but he’s on track to emerge a winner anyway.

“Probably the biggest surprise for me as a player who has taken time off in the past has been finding the flow early in my rounds. For three straight days I’ve gotten off to great starts,” Woods said afterward during an appearance in the NBC broadcast booth. “Overall, I’m so happy to be back out here and competing against these guys. It’s been a tough road to get to this point. I’ve missed it.”

While galleries in the Bahamas have been predictably thin, there is an undeniable buzz surrounding Woods’s return, especially on social media. Even President-elect Donald Trump fired a supportive tweet at Woods Saturday morning.

Woods teed off alongside Rickie Fowler at 12:26 ET in an all-gray ensemble that matched the sky, and he started sublimely, stuffing iron shots on 1 and 2, and feathering a pitch shot on 3 to kick-in range for a third straight birdie. After dropping a six-foot par-saver on 4, he fanned his tee shot on the par-3 5th into a front bunker, but jarred the ensuing sand shot for his most spectacular highlight of the day.

Woods blew a five-footer on 6 for his first bogey in 24 holes but bounced back with another birdie and turned in 32. Yet another birdie putt on 11 pushed him to 11 under, and into the top five.

But then Woods lost the feel with his driver, missing four straight fairways while making bogeys on 13 and 14. He canned one more long birdie putt on 17, but drove into a waste area on 18 and hooked his approach into a pond — the second time he splashed one on the 18th in three rounds — before closing with a double bogey.

Tiger finds the hazard on No. 18.#QuickHits https://t.co/OnM0pQ4KSd

It’s still very early in this comeback, but we can begin to take stock. Here are a few things these 54 holes are not:

They are not part of a major championship, or even a mid-level Tour event. Albany has been completely devoid of big crowds. It is not a particularly arduous golf course. This week hardly resembles the pressure caldron that awaits Woods back on the mainland in 2017.

But here are few things these 54 holes most certainly are: They are part of a PGA Tour-sanctioned event, one comprised of 18 of the world’s greatest golfers. (After Woods at 898, Zach Johnson entered with the second-worst World Ranking, at 38) They count towards World Ranking points, and a $1 million check will be handed to Sunday’s winner. Each golfer in the field would very much like to win one million dollars. And Woods, to this point, is beating seven of them, including the reigning PGA Championship winner (Jimmy Walker) a two-time Masters champion (Bubba Watson) and America’s Ryder Cup hero (Patrick Reed).

While it isn’t Augusta, the pressure and attention have been squarely on Woods this week. All things considered he has responded well.

“One thing I’ve been good at over the years is eliminating the noise,” Woods said. “Coming back for this one in particular, there was a lot. I had to stay focused on what I had to do. I had to get these guys happy, and host an event. But my mind was able to switch over to competitor-mode again, and that felt great.”

Three rounds into his latest comeback, Woods has also answered several questions that were unknown Thursday morning: Can he play a tournament round without re-injury? He has now played three. Did he craft a swing that allows him to compete? He’s made 19 birdies. Has he squelched the short-game jitters that plagued him in 2015? For now, it seems so.

“I wouldn’t be here doing this if I didn’t feel like I can play at the highest level,” Woods said. “I have too much pride, and if I can’t prepare to play at this level anymore, then I won’t do it. But I know that I can.”

From here, Woods will face more questions, including one of the most significant of all:

How will he perform on a Sunday?

That one will be waiting for him on the first tee.