Tiger Woods No Longer at WGCs, They’re Now Up for Grabs 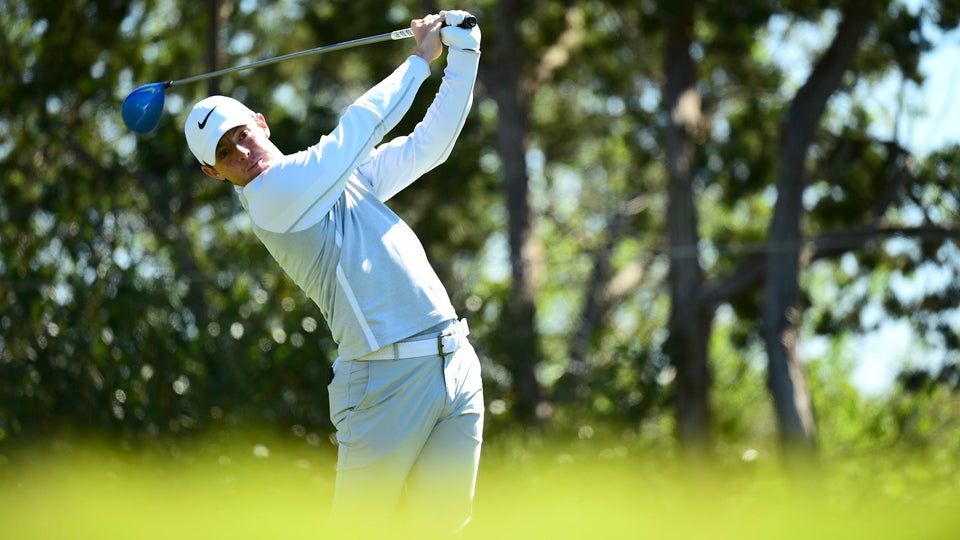 Rory McIlroy has won a WGC event two straight years, and he will try to make it three this weekend.
Kohjiro Kinno/SI

SHANGHAI (AP) — Dustin Johnson’s victory in the most recent World Golf Championship at Firestone this summer means he has to capture only the Dell Match Play to become the first player to sweep the four world events.

For Rory McIlroy, the HSBC Champions that starts Thursday is the last chance to make it three straight years with a WGC title.

It’s all quite impressive until compared with Tiger Woods.

“I know Tiger has won like 18 of these things, I’m not sure,” McIlroy said. “Second place is probably down around three or four.”

McIlroy has a keen sense of history, even when it comes to a series that by golf standards is still relatively new. Woods won a WGC title 18 times in a span of 15 years. Johnson and Geoff Ogilvy are next in line with three.

In some respects, the World Golf Championships can be barometer for the world of golf.

During the height of his career, Woods had no peer. He won a majority of the WGCs at a time when he was ruling golf. Now, they seem to be spread out among top players. Johnson has three. McIlroy and Jason Day have two apiece. Henrik Stenson, Phil Mickelson, Darren Clarke, Adam Scott and Ernie Els also have two. Martin Kaymer, Bubba Watson and Justin Rose are among major champions who also have a WGC title. Golf is loaded with great players, just none that stands out so much clearly over anyone else.

“I guess it is a reflection of where we are,” McIlroy said. “Someone like Tiger comes around, if it’s not once-in-a-lifetime, it’s once-in-a-generation. I think with technology and with the knowledge that’s in the game nowadays with the coaching, it’s harder and harder to separate yourself from the rest of the pack.

“And someone like me sitting here, I’m saying that sort of grudgingly because I would have loved to be on the other side of that, where there wasn’t so much parity,” he said. “But it seems like anyone that tees it up has a great chance to win. Overall for golf, that’s not a bad thing.”

The theory that anyone can win on any given week was illustrated last year at Sheshan International.

Russell Knox was the last one to get into the field at the HSBC Champions and produced his first PGA Tour victory, holding off Johnson and Kevin Kisner. Knox went on to win again at the Travelers Championships, had three runner-up finishes and now is No. 20 in the world.

The HSBC Champions this year has its strongest field ever, even with a few top players taking time off to rest (Jordan Spieth and Mickelson) or letting injuries heal (Day and Rose). It has 40 of the top 50 in the world on a course that has been drenched with rain over the last week.

Woods never won this WGC, though he had only two chances until he stopped playing because of injury or other priorities.

McIlroy introduced an interesting theory on why Woods won 41 percent of the time in the WGCs, nearly 50 percent in stroke play. There is no cut, no stress, and players know they have four rounds to work their way into position.

“I never want to criticize Tiger’s game at all, but if there was one thing or one negative you would say about him was that he probably wasn’t the fastest starter in normal golf tournaments,” McIlroy said. “Here, you don’t really have that pressure of trying to play your way into a tournament. You know you’re getting four rounds, so you’ve got plenty of time to make birdies and play well.”

As his answer was being translated into Chinese, McIlroy wanted to add one more theory that didn’t require nearly as much thought.

“Can I just add one more thing to why he won so many?” McIlroy said. “Because he was the best.”

McIlroy is coming into the HSBC Champions hopeful that three weeks off didn’t cost him momentum. He won the Tour Championship (and the FedEx Cup) and played well in the Ryder Cup. He’s not the only player coming off a break. The field includes 19 players from the Ryder Cup, and Justin Thomas, who is coming off a victory in Malaysia.

Stenson, who won a silver claret jug at Royal Troon and a silver medal in the Rio de Janeiro Olympics in a span of five weeks, will be playing a regular event for the first time in nearly two months and is feeling more fresh than rusty.

“It’s my sixth time in Shanghai, and I don’t think I’ve finished worse than 11th,” he said. “So I’ve played well here, but not quite well enough to win. Hopefully, I can try to change that this week.”