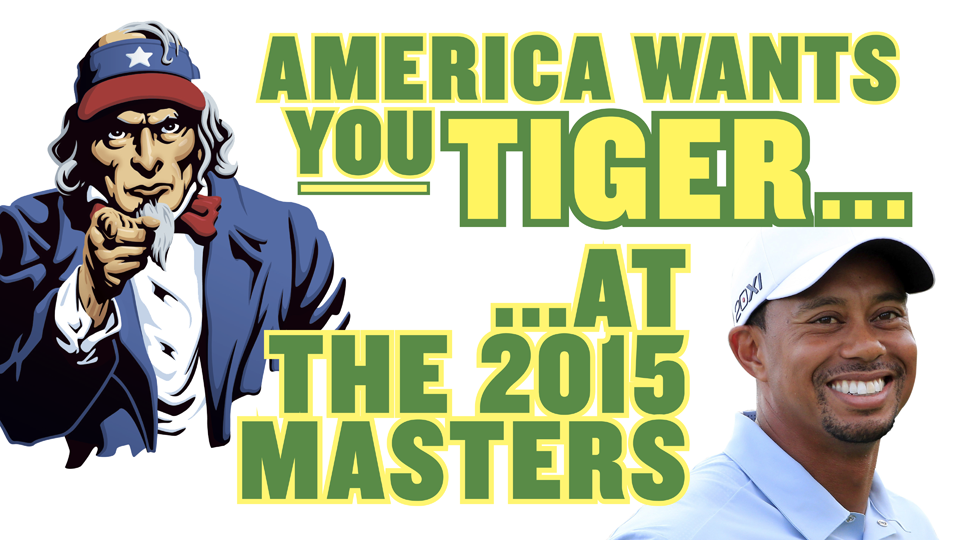 Tiger should just do it.

For Nike, sure. But also for his fans. For Les Moonves and CBS. For Billy Payne, Condi Rice and Augusta National. For IBM. For ticket brokers and event planners. For car-rental companies at the Augusta airport. For the good of the game. For himself.

Tiger Woods should play in the 79th Masters.

He appears to be trending that way. Tiger whisperer Notah Begay on Tuesday told 120 Sports that there is “literally a 50-50 chance right now, from what I can tell” that he’ll peg it. That’s a much rosier outlook than three weeks ago when Begay believed there was “maybe a 1-in-10 chance.” So there’s reason to be hopeful, America. Which is a good thing, because the Masters still desperately needs Tiger, whether he’s ranked 1st in the world or 101st. Here are nine reasons why:

1. HE MAKES EVERY TOURNAMENT MORE INTERESTING

M.A.J. isn’t the most interesting man in golf. Tiger is. It was true when he tied for 41st in his first Masters, in 1995, and it’s still true today. Whether Tiger shoots 63 or 83, you can’t get enough of him. Maybe you’re in that small percentage of fans that would rather see Adam Scott’s silky swing or Billy Horschel’s octopus pants, but the masses still crave the Big Cat. Good, bad or ugly, he’s still a spectacle.

2. RATINGS WILL TANK WITHOUT HIM

There are three constants in life: Death, taxes and woeful TV ratings when Tiger skips a major. Look no further than the Tiger-less 2014 Masters, which produced the lowest Masters weekend ratings for CBS since 1957. (Doug Ford over Sam Snead, y’all!) Total viewership last year: a depressing 11 million. That’s 4 million fewer viewers than tuned in for the premiere of Season 5 of Downtown Abbey. Downtown Abbey! 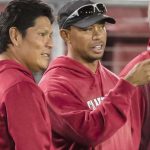 In the run-up to last year’s No-Tiger Masters, Forbes reported that Thursday grounds passes were selling on the secondary market for an average of $800 versus $2,494 in 2013. That was a 67.9 percent drop-off year on year. At press, TicketCity was asking $988 for Thursday tickets to this year’s tournament. Look for that number to tumble if Tiger pulls out again.

John Daly’s tent sale undoubtedly will thrive whether or not Tiger shows, but other businesses will suffer. An events-company executive told CNBC last year that after Tiger announced, on April 1, that he was going to sit out Augusta, the executive’s business saw about a 25 percent slide in Masters-related hospitality bookings (housing, transportation, etc.) and a 30-35 percent dip in corporate bookings to the tournament. During that same stretch in previous years, the executive said, his sales typically spiked.

5. THE PRE-TOURNAMENT BUZZ JUST ISN’T THE SAME WITHOUT HIM

“Tiger Woods is in the interview room.” No Tuesday announcement whips the Masters press corps into a tizzy quite like those seven words. With that call to action, even the most intractable writers dutifully rise from their press-center perches and stream into the interview room likes ants to a crumb. True, the State of the Tiger press conference rarely results in much news (his post-scandal 2010 presser not withstanding), but it’s still an event, an annual rite of spring. Plus, the place positively hums when Tiger is on the premises. Even with his sundry struggles, Tiger remains golf’s Pied Piper, luring galleries and gawkers wherever he treads.

6. WITHOUT TIGER, THE ROARS ARE JUST ROARS

It’s a cliché, but like most clichés, it’s true: There’s nothing like a Tiger roar at Augusta National: not a Jeter roar in the Bronx, not a Springsteen roar in Jersey. Spine-tingling, pine-rocking Tiger cheers are a big part of his Augusta legacy.

7. BECAUSE A TINY PART OF YOU BELIEVES HE CAN WIN

The bookmakers have pegged Tiger’s odds of slipping on a fifth green jacket at a gloomy 50-1. And let’s be honest, that’s a generous line. Given his current form, he looks more like a 250-1. If Woods chips like he did at the Phoenix Open, he won’t break 90 at Augusta. And yet … he’s still Tiger Woods. Part of you, whether or not you’ll admit it, still expects him to flip a switch and rediscover his old magic. Plus, this is Augusta, which just about always brings out Tiger’s best. In his 19 Masters appearances, his scoring average is a gaudy 70.86. That’s tops among players who have started 50 or more Masters. (Next best is Phil Mickelson’s at a distant 71.21.) Tiger has finished outside the top 10 just six times. His total Masters haul: $7,196,806. That’s more than Ben Crenshaw’s career earnings. If any course can draw Tiger out of the doldrums, it’s Augusta National.

8. HE OWES IT TO THE SCRIPTORS

A hardworking team at Nike busted their butts to design and script these threads. Doesn’t Tiger owe it to them to suit up?

9. HE’S NOT GETTING ANY YOUNGER

Tiger turns the big 4-0 in nine months. Forty may be the new 30 in some walks, but not in professional golf—at least not when it comes to winning majors. Since 1960, just 9 percent—or 20 of 220—of majors have been won by the 40-and-over set. And no player over 46 has ever won a grand slam title. Clock’s ticking, Tiger. Don’t let another Masters pass you by.

Do you want Tiger in the 2015 Masters? Tell us why in the comments section below and show your support through our “America Wants You, Tiger” campaign on our Facebook page.