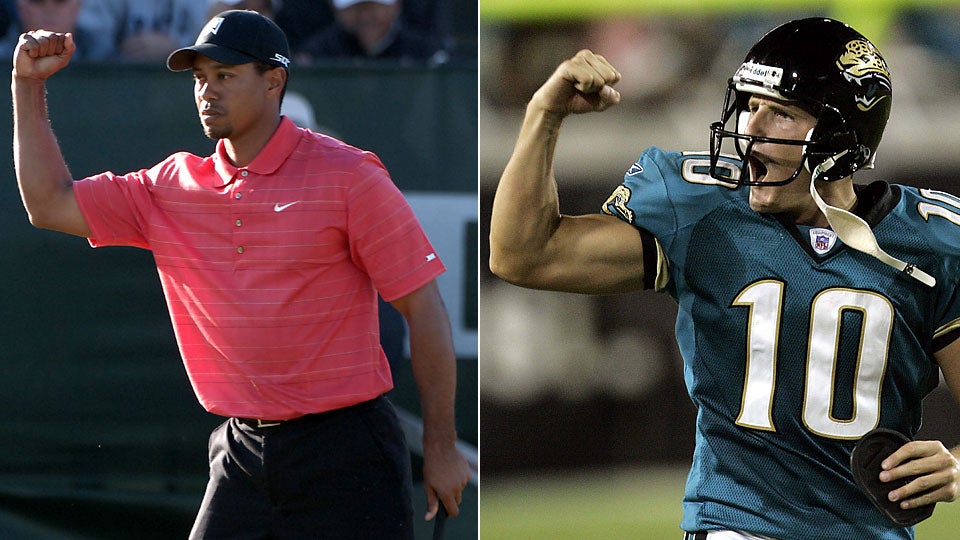 Tiger Woods vs. Josh Scobee and Tiger gets two shots a side. Who you got?
Associated Press

Tiger Woods may not have much going for his golf game at the moment, but there’s one thing he’ll always have: his loyal fans.

Jacksonville Jaguars kicker Josh Scobee learned just how loyal they are this week when he jokingly challenged Tiger to a high-stakes match at San Jose Country Club in Jacksonville.

Scobee is no slouch on the links himself. He did not play in high school or college but has twice attempted to qualify for the U.S. Open and is reported to be a +1.4 handicap. He doesn’t have a handicap listed in Florida or California on the USGA’s handicap database, though he might be feeling like a 25 on Twitter after yesterday. Here’s his original tweet:

And then, a minute later:

Oops meant to text that to him

@JoshScobee10 Tiger wouldn’t waste his time with your chump change of a challenge. #idiotkicker @PTI

@JoshScobee10 what a clown!! Imagine putting a tweet like that out to a living legend @TigerWoods #showsomerespectuloser! @GreigMcSporran

@JoshScobee10 Why didn’t you challenge him in his prime, not his decline? #WeakSauce

Scobee made sure everyone knew he was joking, if it wasn’t already clear:

“@danequintal: @JoshScobee10 you won’t @ him tho”-I could offer him 100k just to respond but he never would. It’s a joke

Scobee proceeded to retweet many accounts that either bashed or supported his humor before posting a Ron Burgandy meme the next evening.