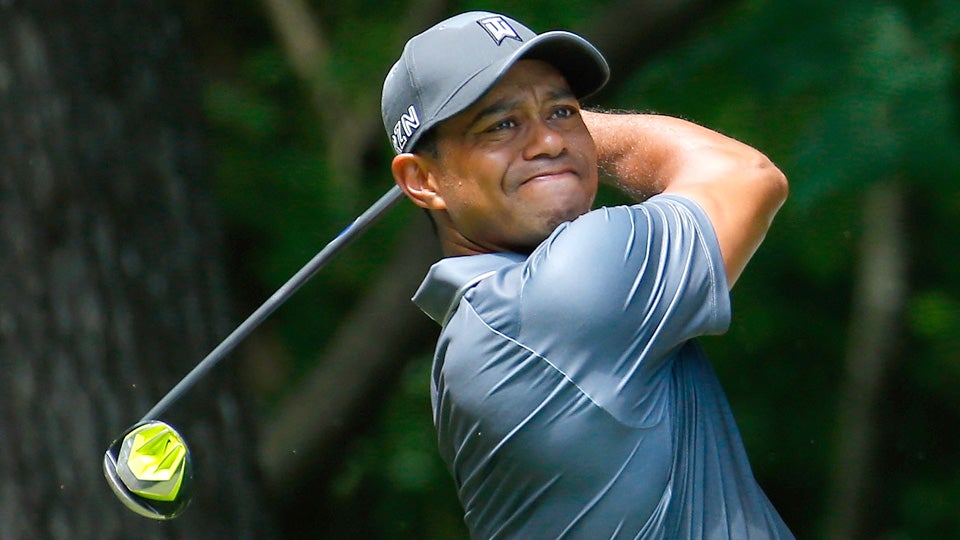 Woods fielded nearly a dozen questions for 16 minutes at the site of the Quicken Loans National in Bethesda, Maryland, an event hosted by Woods and the Tiger Woods Foundation on June 23-26.

Asked about his health and if will play the U.S. Open (June 16-19) and Quicken Loans National, Woods said: “I have been practicing at home and am progressing nicely. I’m hoping to play, I don’t know if I’m going to play. That’s the overriding question I keep hearing, ‘When are you playing?’ I get it all the time.

“If I knew, I would tell you because it would be fun to know. It would be nice to know that I am going to play on such a date, but I don’t know.”

After the presser, Woods and two vets hit shots at the 10th green at Congressional, which was 102 yards away and had water in front. Woods hit three balls — and all three went into the water short of the green.

“Boy, that was stiff,” a seemingly embarrassed Woods said after the first one. “Holy cow.”

While he was again mum on his return, Woods said breaking Jack Nicklaus’ record of 18 majors wins “is certainly still attainable.” He added that he still wants to break Sam Snead’s record of 82 PGA Tour wins as well (Woods is at 79).

He said he’s getting stronger every day but his practices from this point forward will have to be more focused. No more marathon range sessions or running dozens of miles per week.

“I need to be able to go out there and play and recover each and every day,” he said, “and until I get to the point where I feel comfortable doing that, then I’ll make that decision then.”

SHIPNUCK: What Happened to Tiger Woods?

Woods, who has dropped to 524th in the Official World Golf Ranking, hasn’t played since he finished T10 at the Wyndham Championship in August. He had a second back procedure in September and a follow-up surgery in October.

The golf world has waited patiently for Woods to announce his return. Videos surfaced in the last few months of Woods hitting shots. The first example was when he hit an iron during a simulator session in February, and since then he’s teased the internet by taking public swings at junior clinics, the opening of his Bluejack National and, most recently, Tiger Jam.

“Everything about my game is coming around,” Woods said. “Now it’s just a matter of being consistent with it.

“People have written me off,” he continued. “I’m not fertilizer. As far as my golf, I’m progressing, I’m getting better. Just give me a little time.”

World No. 1 Jason Day — who is close with Woods — said after his Players Championship win on Sunday that Woods told him he’s “gonna kick my butt when he comes back.”

When that will be remains golf’s biggest question.