Tiger Woods found asleep at the wheel, didn’t know where he was when arrested for DUI

Fourteen-time major-winner Tiger Woods was found asleep in the driver’s seat when he was arrested for DUI early Monday morning, but alcohol was not found in his system, according to the police report.

The report of Woods’s Memorial Day DUI arrest was released by the Jupiter Police Department Tuesday, and it details an alarmingly dangerous string of events for Woods, who last played professional golf in February.

According to the report, Officer Palladino saw Woods’s black Mercedes stopped in the right lane with the vehicle running, brake lights on and right blinker flashing at 4:22 a.m. The officer reported that Woods was alone in the car, had his seat belt on and was found asleep at the wheel.

“Woods had extremely slow and slurred speech,” according to the report, which listed Woods’s attitude as “sluggish, sleepy, unable to walk alone.”

Woods, 41, blew a 0.000 in two breathalyzer tests. He said in his statement Monday night that alcohol was not a factor, instead that it was “an unexpected reaction to prescribed medications.” According to the report, Woods said he was taking Solarex, Vicodin, Torix and Vioxx (but that Vioxx hadn’t been taken this year).

Woods told the officer he was “coming from LA California from golfing” and that he “did not know where he was. Woods had changed his story of where he was going and where he was coming from. Woods asked how far from his house he was.” 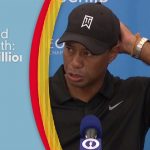 The officer asked Woods if he understood the Romberg test (reciting the alphabet backwards). He responded, “Yes, recite the National Anthem backwards,” according to the report. Woods eventually completed the task.

According to the report, Woods did take a urine test, but results of that have not yet been made available. Woods will be arraigned on July 5.

Woods last played pro golf on Feb 2., when he shot 77 to open the Dubai Desert Classic. He withdrew the next day citing back spasms. On April 20 he announced he had undergone his fourth back surgery.