NASSAU, Bahamas — No one will confuse the first round of the Hero World Challenge for Masters Sunday. It’s an unofficial PGA Tour event run by the Tiger Woods Foundation. There are only 18 players competing on a less-than-taxing Albany layout, and the galleries are more U.S. Amateur than U.S. Open.

But if you don’t think Thursday’s opening round meant a great deal to the tournament host, you would be wrong.

Playing a competitive round for the first time in 301 days, Woods opened with a mixed-bag three-under 69. He hit big drives through the breeze and made long putts. He chunked chips (twice) and fist-pumped (also twice). He cussed like he used to in his world-beating heyday. Most important, though, he looked healthy. He didn’t grimace after swings or gingerly bend down to pick up his ball. He joked with playing partner Justin Thomas on the tee box and in the fairway yet still exhibited his signature steely stare.

Oh, and he knows exactly where he stands on the leaderboard. Easing into a return be damned. He’s three behind leader Tommy Fleetwood (66).

“It was not only nice to get the first round out of the way, but also I’m only three shots out of the lead,” said Woods, who hit seven fairways, 12 greens and needed 28 putts. “So to be able to put myself there after not playing for — is it 10 months or so? — in the neighborhood of that, it was nice to feel the adrenaline out there.” Don’t read too much into Woods’s first round, tempting as it may be. After a fusion spinal surgery, 10 months off and precious few competitive reps over the last three years, he still has a long way to go. One start and one tournament mean little in the grand scheme of a comeback. But it’s a start, and there was a lot to like about his return. And while this specific comeback may seem similar to last year’s, which also happened here at the Hero, it’s not. A new chapter has new hurdles.

To sum, he finished 15th at the 2016 Hero before missing the cut at Torrey Pines. In his next start he opened with a 77 at the Dubai Desert Classic, in which we saw him use a wedge to leverage his way out of a bunker. It was an eerie sign of things to come. He withdrew before the second round and had a fusion back surgery — his fourth back procedure — in April. He went half a year without swinging a club, instead using one as a cane to get around his house. And things turned frightening in May, when he was found asleep at the wheel of his vehicle and arrested for DUI. Woods entered treatment for the mismanagement of his pain medication.

In August the latest comeback attempt hit its early stages. He tweeted videos of his progress, and in the past few weeks we’ve heard the obligatory reassurance from pros like Rickie Fowler (hitting it “way by me”), Jason Day (“best he’s felt in three years”) and Brad Faxon (“outdriving Dustin Johnson half the time”).

Still, we hadn’t seen him in the course, in a tournament round, when every shot is counted. Not until 12:05 p.m. on Thursday.

After a warm welcome on the 1st tee, Woods blistered a drive up the left side of the fairway, some 30 yards past Thomas’s tee shot. He knocked his approach to 15 feet then burned the edge of the hole on his birdie attempt. After another near birdie on the par-4 2nd, he hit a laser 2-iron 265 yards to reach the green in two on the par-5 3rd. In vintage Tiger fashion he stared and walked after his approach. Two putts from 50 feet led to his first birdie.

You may also like WATCH: Tiger’s first comeback fist-pump after holing putt from off the green

His first hiccup came on the 4th, when he chunked a chip but bailed himself out with a par putt from the fringe (followed by his first fist-pump). He ran another birdie putt past the edge of the cup on 5 and lipped out for birdie on 6. After a disappointing par on short par-4 7th — he drove it into a greenside bunker, blasted out and two-putted — Woods knocked in a 25-footer for birdie on 8 to get to two under.

“I know he’s a grinder from watching,” said Thomas, who had never played a round on Tour with Woods until today and also shot 69. “I knew he was a great putter from the amount of putts I’ve seen him make on TV in the past. He’s driving the ball really well, which he was driving it well at home. He didn’t finish off very well driving it, but like I said, it wasn’t anything out of the ordinary for what I was expecting.”

Woods’s second slip came on the par-5 9th, when after a booming drive and fairway wood to the green he was left with a short-sided chip off a tight lie. He chunked it, putted it from the collar and two-putted from there for a bogey, making the turn in one under.

“Just like last year, I was rolling, got to 9 or 10, made a couple mistakes and the round slipped away,” said Woods, who opened the Hero with a 73 last year. “I was not going to let that happen this year.”

He bounced back with a birdie on 10 and then two more on 13 and 14, the latter a near kick-in after he stuck a wedge close. That got him to four under and one off the lead, but his next drive on the par-5 15th went well right — his first bad swing with the driver all day. 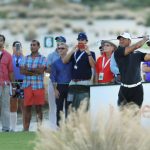 You may also like TEE TIMES: Pairings, TV schedule for Round 2 of the Hero World Challenge

Woods said Wednesday that he’s comfortable “with pretty much every shot in the bag,” but is still learning distance control. He also admitted he’d yet to take a hack at a ball nestled in thick rough. Albany doesn’t have much in the way of rough — the fairways are instead lined with vast sandy waste areas like the one he found on 15.

After a lengthy conversation with caddie Joe LaCava, Woods took a drop and blasted his third shot short left of the green. He knocked it on and two-putted for bogey. Woods played all five of Albany’s par-5s in one over for the day.

“I was in position to really get something close to five, six, seven under par today, but I made a couple mistakes on those par-5s,” Woods said.

Woods, who tees off at 11:43 a.m. on Friday alongside Henrik Stenson, closed with pars on the final three holes. After his final putt on 18, he shook Thomas’s hand, slapped him on the back side and walked off the green. The small gallery continued to cheer as Woods made his way through a narrow walkway to the clubhouse.

Perry and Regina Ardito were watching nearby. They decided to come last minute from Houston to watch Woods’s return.

Woods turned, made eye contact and smiled wide. “Thank you,” he said. It looked like he really meant it. “Thank you.”