Tiger Woods Approaches 40, Which Might Be His Toughest Number

If the celebration is muted when Tiger turns 40 two days before New Year’s, I wouldn’t blame him.

This is not a good time in his career. Tiger is recovering from a second surgical procedure on his back in two months — his third in less than two years — and that is the worst possible failing body part for a golfer. Every part of the swing is tied to the back.

Tiger’s race toward history has been stalled for so long, it’s collecting dust. You remember that timeline that shows the age Jack Nicklaus was when he won each of his 18 major championships?

That chase has a new wrinkle. For the first time in this century, Nicklaus is pulling away.

No, the scoreboard hasn’t changed. It still reads: Nicklaus 18, Woods 14.

Once Tiger reaches 40, he will fall dramatically behind Jack’s pace in the Chase.

Tiger got his first major before Jack did, becoming the youngest Masters champion at 21. Since 200, Tiger had been ahead of Jack’s major championship pace.

In 2008 a 32-year-old Tiger limped around Torrey Pines and won his 14th major, at the U.S. Open. Despite the leg injury, he seemed like the surest bet to make history since Secretariat. Nicklaus was 35 when he scored his 13th and 14th majors, in 1975. So after beating Rocco Mediate in that memorable 19-hole playoff, Tiger had a three-year advantage on Jack.

Since Tiger had won five of the previous 14 majors before Torrey Pines, writers routinely looked ahead to predict when re where Woods might match Jack’s record. There was no if in those equations, only when.

You know the rest of Tiger’s tale: reconstructive knee surgery later in 2008; the scandal in 2009 and subsequent divorce; coaching and caddie changes; no victories in 24 major championship appearances since then and missed cuts in three of his last four.

Back to Jack: Nicklaus won his 15th major title in 1978 at 38. So in 2014, Tiger finally slipped into Jack’s wake, one major championship behind Jack at that same age.

In 1980, a rejuvenated, 40-year-old Nicklaus surprised observers by rallying from a slump and memorably winning the U.S. Open at Baltusrol and then the PGA Championship at Oak Hill, majors No. 16 and 17.

That means the moment Tiger turns 40, he falls three majors off Jack’s pace.

In 2016, it will have been eight years since Tiger’s last major victory. That’s a big gap but not insurmountable. Julius Boros, Henry Cotton, Ben Crenshaw, Hale Irwin and Gene Sarazen won majors 11 years apart, while Ernie Els and Lee Trevino had 10-year gaps. But the longer the wait, the less likely Woods wins again.

After the two recent back procedures, Tiger’s career has turned into a comeback story.

You have to respect Tiger’s accomplishments and skill enough to acknowledge that we can’t say he is finished, even though you may be sorely tempted. The rule is, Tiger isn’t done until Tiger says he’s done.

If injuries prematurely end his uniquely memorable career and the Chase to Catch Jack, there is no shame in that. Woods has outdone every golfer except one by a wide margin. And that golfer, Nicklaus, will turn 76 on Jan. 21, about three weeks after Tiger hits 40.

Those numbers ought to be stark reminders about the fleeting nature of time and our mortality.

Happy birthday, gents. Both of you, I presume, will find reasons to celebrate. 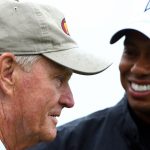 Tiger isn’t trying to fool anyone. When he had back surgery in September, it was announced that he’d undergone “a second successful” back surgery. If the first back surgery the previous year was “successful,” why did he need a second one?

Even Tiger concedes the obvious now. At the Hero World Challenge in the Bahamas, he admitted that he doesn’t know if and when he’ll play again. His recovery program, at that moment, consisted of walking a little bit. He is miles away from simply playing golf.

One thing at a time. Right now, he’d settle for being able to kick a soccer ball around with his two kids.

His recovery timetable isn’t set because he’s in uncharted territory (and even he said that much), but it will be measured in months, not days. His career is in limbo, and he admitted as much in a candid interview with Time magazine. If he’s done as a force in pro golf, well, he said he had a good run.

Tiger sounded like a man who is finished but don’t read too much into that. He was simply answering questions that need to be asked. Still, he is already spinning his career numbers. That chart on the wall of his bedroom growing up? It wasn’t about Jack’s 18 majors, he said; it was about Jack’s many accomplishments and at what age he accomplished them. I beat them all, Tiger said, it was never about getting to 18. And while is short of Sam Snead’s PGA Tour record for career victories (79 to 82), Tiger noted that he blew past Snead on the majors list (Sam had seven) years ago.

Tiger is doing what he has always done on a golf course — attacking. He knows his career, as phenomenal as it has been, will unfairly be seen by many as being incomplete. Health issues notwithstanding, what successful golfer walks away at 40? He knows the stories won’t be about his winning 14 majors and what a remarkable 12-year run he had.

It’ll be about not getting to 18 — and why he didn’t. The knee. The fire hydrant. The back.

The first hint of Tiger’s accepting a new place may have come when he called Davis Love III, a Ryder Cup task force member and the 2016 Cup captain, and asked to be included in the administrative loop. Whether he suspected the news on his back might be bad or he was simply trying to reserve his place in line for a future captaincy, it was a sign of Tiger’s looking toward a new and very different future.

He has never seemed like the elder-statesman type. But now? Maybe, just maybe, with enough reps.