After months of speculation, anonymous sources and vague answers to the question everyone has been wondering, we finally have our answer.

Tiger Woods will miss the 2017 Masters at Augusta National.

Woods announced on his website Friday that he’ll miss the first major of the season for the third time in four years. He also missed it in 2014 and 2016.

“I did about everything I could to play, but my back rehabilitation didn’t allow me the time to get tournament ready,” Woods said. “I’m especially upset because it’s a special anniversary for me that’s filled with a lot of great memories. I can’t believe it’s been 20 years since I won my first green jacket.

“I have no timetable for my return, but I will continue my diligent effort to recover, and want to get back out there as soon as possible.”

Back issues continue to plague the 14-time major champion. After missing 15 months due to two surgeries he returned at the Hero World Challenge in December before missing the cut at the Farmers Insurance Open in January. He withdrew from the Dubai Desert Classic after one round the following week due to back spasms and later withdrew from the Genesis Open and Honda Classic.

He missed the Arnold Palmer Invitational in mid-March and said he had “no timetable for my return to golf.” Two weeks ago Woods made the rounds in NYC to promote his new book, The 1997 Masters: My Story, and told Good Morning America that he’s “trying” to be ready for the Masters. Earlier this week Golf Channel analyst Brandel Chamblee said he “wouldn’t be surprised” if Woods played the Masters. 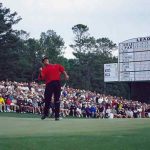 You may also like ‘We were watching greatness’: An oral history of the 1997 Masters

Speculation continued on Thursday, when the Masters released its schedule of press conferences for the week and had Woods scheduled for 1 p.m. Tuesday. Of course, that didn’t mean Woods had made a decision yet. In his post Friday, Woods said he’ll be back at the Masters for the Champions Dinner Tuesday. He did not clarify if he would still hold the 1 p.m. press conference.

Last year, Woods was at Augusta for the Champions Dinner on Tuesday night but wasn’t around the rest of the week. This year is the 20th anniversary of his historic 1997 win—the first of his four green jackets.