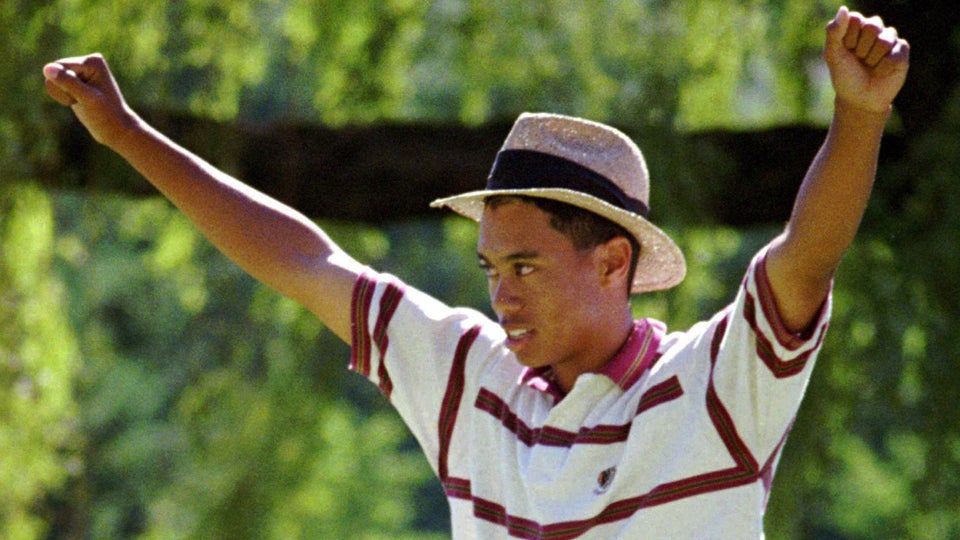 Tiger Woods celebrates after sinking the winning putt of the U.S. Junior Amateur in Portland, Oregon, on, July 31, 1993.
DON RYAN/AP

Stop me if you’ve heard this one:

Tiger Woods was as good as beaten when he missed a short par putt on the 16th hole in Portland, Oregon. That left him 2 down with two to play and his dream of winning an unprecedented third straight U.S. Junior Amateur Championship in 1993 was all but over.

Wait a minute. This is Tiger, at 17, already building his legend. Yeah, you know exactly what happened next. “I had to play the best two holes of my life—birdie on 17, birdie on 18—and I did it,” Woods said. “The only thing special about it was my comeback,” said Woods, who finished with a 22-1 match-play record in four Junior Am appearances.

“I’m heartbroken,” said Armour, who lost in the quarterfinals the year before to Woods, 8 and 6. Armour had gone 1-up on Tiger in this match by sinking a 40-foot putt on the 15th hole. When Woods lipped out a par putt on the 16th, Armour led 2-up and admitted later, “I thought I’d win this match if I parred 17.”

Nope. Tiger drove it 40 yards past Armour, then ripped a 3-iron to seven feet. At 18, a par 5, Tiger hit into a greenside bunker and splashed out to 10 feet. Armour had a short tap-in for his par so Tiger had to make his birdie putt to force extra holes. Surprise! He made it.

“It was mine, I had it in my hands, but he was teasing me,” Armour said later. “It was like he was following a script. I don’t think many people could have done what Tiger did, professional, amateur, junior amateur, whatever. That’s why he’s the best.”

Tim Crothers wrote in Sports Illustrated: “Is Eldrick (Tiger) Woods really old enough to have won anything three times already? … Woods, the cocksure golf prodigy who tells anybody who asks that all he really wants to be is the Michael Jordan of his sport, mirrored his idol by completing a three-peat at the U.S. Junior Amateur. To look at him, Woods seems barely old enough to have three-peated with his razor.”

With this incredible comeback victory, Woods became the first three-time Junior Am champion in USGA history. Only one other player has even won the Junior Am a second time. That was a kid named Jordan Spieth, a champion in 2009 and 2011. Wonder what ever happened to him, anyway?