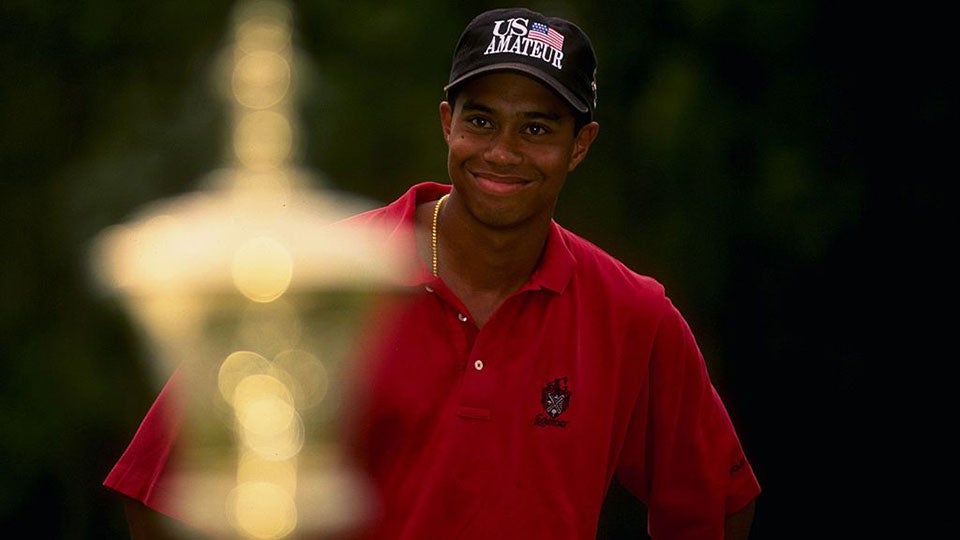 Even more amazing was how he won some of them. In the 1994 U.S. Am final, he came back from a 7-down deficit through 13 holes to beat Trip Kuehne.

In 1996 at Pumpkin Ridge in Oregon, Woods was 5 down to Steve Scott through 18 holes of the final match and still 2 down with three holes to play. Even by Tiger’s high standard of drama, this one was special. He shot the equivalent of a bogey-free 65 in the second 18 just to force the match to extra holes.

Scott, 19, was a sophomore at Florida. He knew the license plate of the truck that hit him. “He caught on fire and did his famous comeback,” Scott said. “You know Tiger. He turns on the afterburners and leaves you in the dust.”

Woods missed birdie putts at 14 and 15 and was still 2 down when he made a six-footer for birdie to win the 16th hole. At 17 Woods holed an unlikely 30-footer to square the match.

The players parred 18 and the first extra hole and the match finally ended when Scott missed the next green, chipped to seven feet and lipped out his par putt. Woods won with a par, tapping in a two-footer to become the first three-peat Amateur champ, and raised his arms in victory. Tiger first hugged his mother, Kultida; held a long embrace with his sobbing father, Earl; and hugged his coach, Butch Harmon, before finally exchanging congratulations with Scott.

“Winning three Amateurs in a row is something else,” Woods said. “I just can’t tell you what a weird feeling it is.”

Asked when he would turn pro, Woods said he didn’t know — it turned to be mere days later. “I just know one thing,” he said. “I’m going to celebrate like hell tonight.”