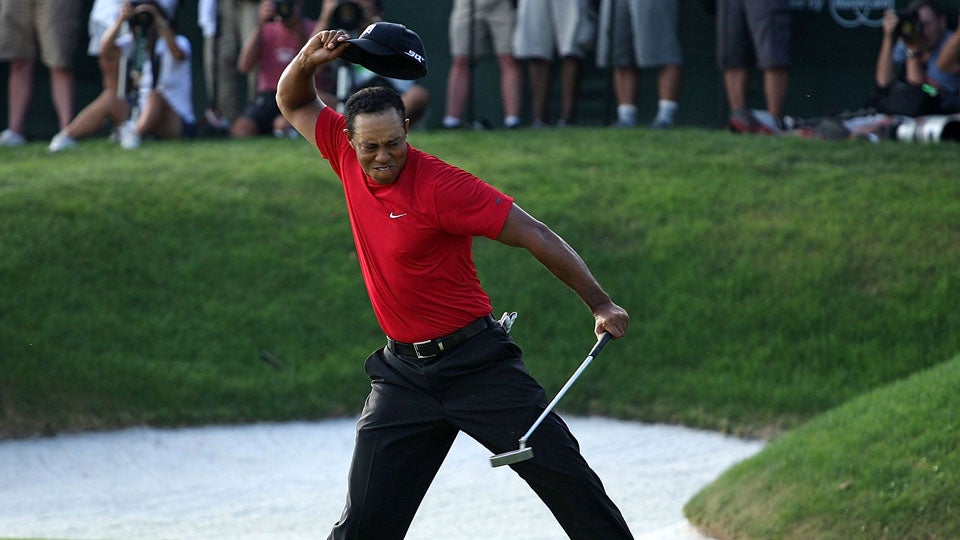 Tiger Woods celebrates making a birdie on the 18th green to win the Arnold Palmer Invitational on March 16, 2008 at the Bay Hill Club and Lodge in Orlando, Florida.
Getty Images

If that makes you feel old, look at the bright side: Over the last two-plus decades you’ve had the privilege of watching a once-in-a-generation talent dominate the game in ways once thought unthinkable. If Woods turning 40 makes him seem old, well, god bless your youth — and the power of the Internet, where you’re just a couple of search terms away from catching up on any Tiger highlight that might have predated you.

The journey to Tiger’s big 4-oh has been quite a ride, not only for Woods but also for the millions of fans he has strapped in and taken along with him. Just as you might remember where you where when you watched the U.S. hockey team upset the Soviets in Lake Placid or Buster Douglas down Iron Mike, you also likely remember your whereabouts when Woods won the 1997 Masters, or the 2000 U.S. Open — by 15. Call it the Tiger Effect.

Surely you also recall the moment when you first heard reports of that bizarre Thanksgiving night in 2009 when Woods’s world began to unravel. Or, when five months later, he made his endlessly hyped return from tabloid infamy to challenge for the green jacket.

The scope of indelible Tiger moments is staggering. It would be nutty to try to rank them in terms of their impactfulness, but to commemorate Tiger’s milestone birthday, that’s exactly what we here at GOLF.com have done. Over the next 40 days, GOLF.com will roll out Tiger’s 40 biggest moments, beginning with No. 40 today and finishing with No. 1 on Tiger’s 40th birthday. To recap: That’s 40 Tiger moments. In 40 days. Ranked.

Love our choices? Loathe ’em? Have your own Tiger moment that you’d like to share? Let us know about it on our Facebook page, Twitter feed or in the comments section below. In the meantime, drumroll, please… Tiger Woods has holed countless crucial putts. This one makes our ranking because of both the clutch factor and the circumstances surrounding the moment. The scene: the 2008 Arnold Palmer Invitational at Bay Hill Club & Lodge. Woods faces a 24-footer that breaks downhill from left-to-right. If he drains it, he’ll win Arnie’s event for the fifth time and also his fifth consecutive PGA Tour title during an epic run of dominance. It would also be his 64th Tour win, tying him with Ben Hogan’s career tally. If he misses, he has more golf to play, a playoff with Bart Bryant.

With the King looking on greenside, Woods stikes the putt. Never a doubt. With his ball still a foot outside the hole, Woods begins celebrating. He rips off his hat and slams it on the green, then turns to the crowd for a spirited double fist pump.

“I was so into the moment of the putt going in and winning the golf tournament,” Woods, then 32, said after the event. “I kept telling myself, ‘I’ve done this before. I’ve done it before and I can do it again.'”

And again, and again.